Martin Coppinger in action during his 2012 King of the Roads victory.

THE 2012 King and Queen of the Roads Festival had drama on a grand scale.

The Southern Star report on the weekend began as follows: ‘Seldom, if ever, in the 28-year history of these great competitions have the titles been decided in such spellbinding fashion. Both finals produced bowling of a high order, but it was the nail-biting nature of the closing stages that made them particularly memorable’.

David Murphy, the gold medal winner at the 2012 European Championships that May, was going for an unprecedented four-in a row while Kelly Mallon was heading for a hat-trick of Queen titles.

It would take something out of the ordinary to break their stranglehold – but Martin Coppinger and Silke Tulk were the ones to deliver.

The Bantry native was a powerful force, All-Ireland senior champion for the second time, but King of the Roads success had eluded him thus far. There was a hint of what was to come when he produced a stirring semi-final performance in defeating Aidan Murphy and Dutchman Aarhen Hassink to set up a final clash with the defending champion, who was also impressive in disposing of the challenges of Ulster champion Conor McGuigan and German challenger Robert Djuren.

The final on Sunday was an epic duel. Locked together in 11 each to the ‘big turn’, Murphy held big law after a searing drive to the ‘sycamores’ but it wasn’t quite over. The following report describes the closing shots. 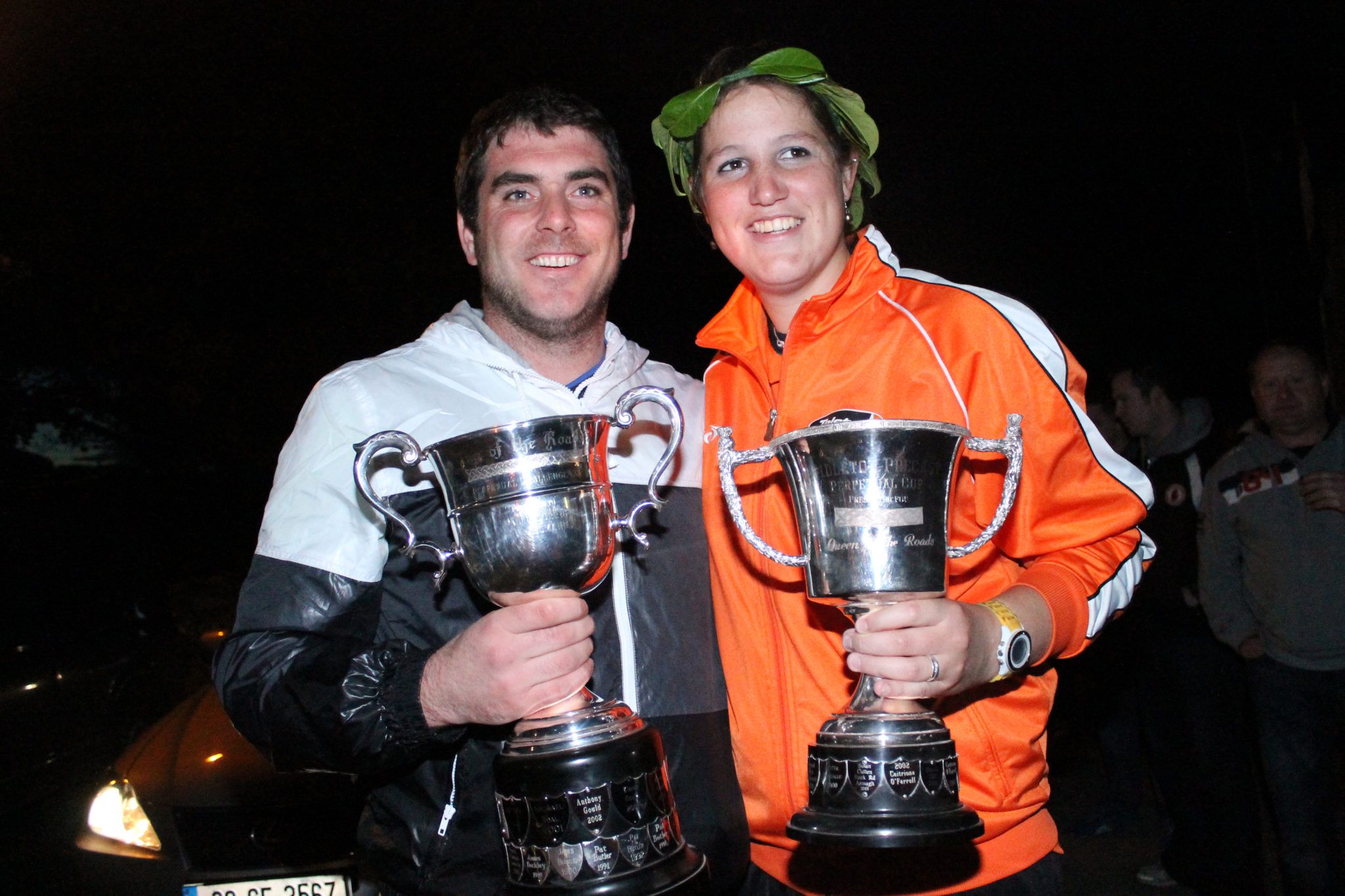 Martin Coppinger and Silke Tulk were crowned King and Queen of the Roads champions in 2012.

‘Not for the first time this year, Coppinger stared at defeat and refused to yield. He pitched a final effort that sped along the centre, cut the left-hand bend and was marked down away in the distance near the end of O’Connell’s green. Another shot for the record books leaving Murphy with an almost impossible task. He gave it everything, but it stalled seven metres short. Scenes of euphoria followed as the Coppinger camp enjoyed a champagne celebration’.

It wasn’t the end of the day’s drama. Immediately after, Silke Tulk and Kelly Mallon produced another contest for the ages. The Dutch champion, almost a shot down early, roared back to take a commanding lead entering the last quarter. Mallon rallied to take the fore bowl facing the line only for Tulk to win it with a sensational last shot. More scenes of jubilation followed as the orange-clad visitors celebrated. Mallon got the better of All-Ireland champion Catriona O’Farrell and German contender Anke Klopper in one semi-final, while Tulk battled hard to overcome European champion Carmel Ryan and qualifying competition winner Catriona Murphy.

The King crown returned to the Murphy household in 2013 when Aidan of the clan captured his second title. The younger of the Brinny brothers, the current All-Ireland senior champion was also a gold medal winner at the previous year’s Pesaro championships, beating the best in Europe in the Moors bowling event and had his competitive instincts perfectly honed for the 2013 King and Queen festival. They needed to be, and the roll of the dice went his way as well in a magnificent semi-final battle with All-Ireland champion and defending King Martin Coppinger. German Ralf Look was also in this three-way and led early. Murphy took over but Coppinger lined a magnificent shot to the ‘big turn’ and was in control facing the line. Murphy’s last was good, but Coppinger’s reply had its measure only to hit a parked vehicle and lay up. Edmund Sexton blitzed the road in an impressive semi shoot-out with Ulster’s Martin Toal and Dutchman Jerry Dekker.

The Murphy-Sexton final was an engaging set-to, too. Sexton recovered from a poor fourth, but Murphy’s gritty determination saw off the North Cork man’s challenge and a big closing quarter brought him his second King crown.

Carmel Ryan had a tough battle keeping the Cork flag flying given the awesome challenge presented by Kelly Mallon and Silke Tulk, but in 2013 she scored her greatest success, 14 years after her previous win. The Carrigtwohill woman was All-Ireland champion having edged Kelly Mallon for the national title at Whitechurch and was, of course, European champion from the previous year.

Ryan was superb in her semi-final win over Astrid Henrichs (Germany) and Togher Cross lady Catriona Murphy, who had won the qualifying tournament. Silke Tulk overcame Kelly Mallon and Gretta Cormican in the second semi setting up what would be a pulsating decider.

‘Both players were at the peak of their powers sharing the lead on numerous occasions. Ryan’s two sensational shots from back of the ‘green’ brought her within sight of the line and were instrumental in a thrilling victory,’ the report read.

2013 also marked the first year of the Mass Engineering Youths International Triple Crown as the underage champions from the competing nations vied for honours. The Dutch pairing of Joachem Winnink and Manon Zanderick were inaugural winners. 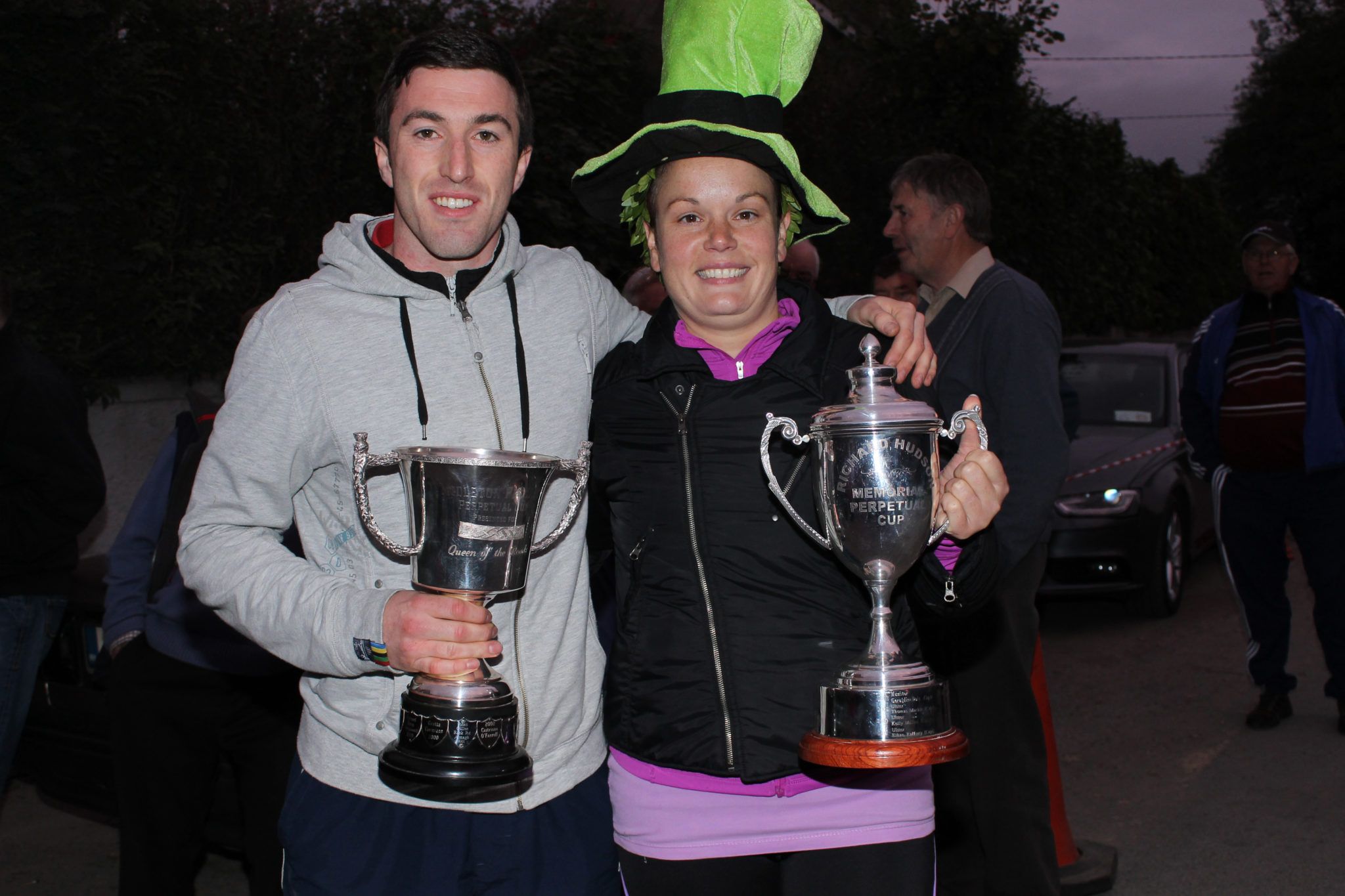 Aidan Murphy and Carmel Ryan were the King and Queen champions in 2013.

It was, perhaps, fitting that for the 30th King and Queen hosting in 2014, a player whose contribution since the early years was exceptional should return for a shock win. James Buckley was contesting his ninth final when he faced All-Ireland champion and King holder Aidan Murphy in the 30th anniversary decider. Massively the underdog, he produced an almost faultless display characterised by two brilliant shots from the no-play lines to sight at the end of the long straight giving him a two-bowl lead for the closing quarter. It was enough for a fourth King crown 19 years after his previous success.

Silke Tulk was in unbeatable form in the Queen decider in 2014 when avenging her defeat to Carmel Ryan the previous year. County champion Ryan was bowling well but 14 shots on the inward route represented an awesome display from the Dutch challenger. In the Queen semis, Ryan defeated Kealkil’s qualifier Claire O’Sullivan and Germany’s Anke Kloppper while Tulk mastered All-Ireland champion Kelly Mallon and Rosscarbery’s Emma Fitzpatrick.

The 30-year milestone was marked by a special presentation to King and Queen organiser-in-chief, Seamus Ó Tuama. In making the presentation former Ból Chumann PRO Noel Magnier, spoke of the extraordinary contribution the event had made to the sport of road bowling.

Also, PJ Cooney won the Jim O’Driscoll Cup for the second time in three years and Mairead O’Driscoll with David Devlin won the Youths international triple crown. Armagh scored doubles successes when the combinations of Ruaidhri O’Reilly/Eugene Kiernan and Shane O’Neill/Austin McKeown were successful. It may have been a portent of things to come. We were about to enter a period of prolonged Ulster domination as the big prizes at the King and Queen festival took a northbound course.