Nine-time finalist and four-time winner James Buckley, Commons Road, was a major player at the King of the Roads Festival.

This is the second part of our King of the Roads special as we reflect on the late 1980s and early 90s.

Here is the link to Part 1

THE King of the Roads Festival was on a firm footing when the fourth hosting got underway on October 15th, 1988.

The youthful Michael Toal from Grange, Co Armagh, was the man of the moment. At 18, the youngest All-Ireland senior champion ever, he was a player with blinding speed and seemingly indestructible. And yet for a while Ballincurrig and attaining King of the Roads glory would prove a difficult hurdle to overcome.

Toal had comprehensively beaten Mick O’Driscoll, Blackpool, in the national decider and they were now pitted against each other again in the King of the Roads semi-final. In a fraught encounter marred by several ‘called’ bowls, O’Driscoll reversed the All-Ireland result, much to the astonishment of the large attendance.

The bowling paled in comparison with the tour-de-force delivered by Seamus Sexton and Bill Daly in the first semi-final played out the Ballincurrig route. This was a momentous duel with defending champion Sexton beating a monstrous last shot of Daly’s to win a dramatic contest.

The final on Sunday was played back to the village and it was one that produced another finish for the ages. Superseding even the drama of the previous evening, Sexton, fighting a rearguard battle throughout, rallied to lead with two to go but missed a glorious chance of victory when throwing for the line. He followed up though with massive last that looked a certain score-winner, but O’Driscoll, who had upped his game hugely from the previous day, showed the mettle of a county champion when passing the formidable mark to become the fourth King of the Roads champion. 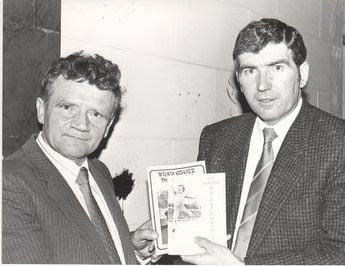 James Buckley of Commons Road, on the back of a chequered underage career, was All-Ireland intermediate champion when the 1989 King of the Roads Festival got underway. He was, however, in everybody’s estimation, a player of senior standing who was more than a match for the game’s best, an appraisal that would prove bang on the money by the time the competition was completed.

Buckley started favourite against then county senior champion Declan O’Donovan in their Saturday semi-final and duly won, leading all the way in a display of strong and powerful bowling. Defending champion Mick O’Driscoll, Blackpool, was again pitted against Armagh’s Michael Toal in the first semi-final played out the road on Saturday, and he repeated his victory of the previous year in a score of very mixed bowling.

Sunday’s final was a dour duel with O’Driscoll in the ascendancy for most of the road. The reigning champion made a mistake at ‘Heaphy’s’ and Buckley pounced. In the words of ‘28’, ‘Buckley, sensing the let-off, took the score by the scruff of the neck by putting as fine a finishing spurt as we have ever been privileged to witness at the East Cork venue. He set the road ablaze with a bullet-like bowl from the no-play line, followed by another miler past the creamery and reserved his best efforts for a last shot that died out on the road at the ‘school corner’.’ The new King would garner further success in the years ahead.

The new decade dawned with the King of the Roads Festival now a staple on the bowling calendar. Under Seamus Ó Tuama and his hard-working committee, with Bank of Ireland on board as sponsors, it was going from strength to strength.

1990 would prove momentous in more ways than one. Pat Butler won the senior championship title in 1978 but, bar a runner-up spot to Michael Buckley in 1983, he had faded from the picture over the next decade. His renaissance would be spectacular. A rejuvenated Butler strode through the senior championship in 1990, winning outright honours and he would go on to dominate the premier grade for much of the 1990s. However, his King of the Roads debut was less auspicious. James Buckley, the reigning King, was a proven operator out and in the Ballincurrig venue. He showed his prowess in spades in a thrilling semi-final win over Eamonn Bowen (Sen) of Carrignavar, a score characterised by superb bowling from both men.

Meanwhile, as All-Ireland champion Pat Butler had a rare battle with Ulster champion Harry Toal (Jun) before eventually emerging victorious by a bowl of odds in the second semi. Sunday’s final then with Buckley defending against Butler blew up a storm in every sense of the word. Conditions were appalling. Playing in towards the village, an incessant downpour accompanied proceedings from the first shot to the last, leaving a carpet of water over much of the road.

Buckley made the better fist of it and forged close to a bowl up with four to go. Then a sequence of ‘called’ bowls brought the contest to an abrupt halt. Pat Butler overstepped his mark on three occasions on the same throw resulting in his disqualification from the score.  James Buckley retained his crown but not in the manner he would have preferred.  It would, however, not be the last Ballincurrig would see of Pat Butler. The City great would soon return to make his mark.