Kelly Mallon and Silke Tulk were the Queen finalists in 2011.

2008 was a big year for bowling as the association’s governing body was tasked with hosting the European Championships.

From a playing and organisational standpoint, they were successful beyond expectation and the big winners graced the stage at Ballincurrig for the October King and Queen of the Roads Festival.

The King final of 2008 was an all-Murphy affair as Aidan, now established, along with his brother David, in the upper tier of senior bowling, met in the final. They had met in the county senior championship final, too, with David taking the title, but this time roles were reversed. Thanks to a magnificent cast at ‘Geary’s’, the younger Aidan claimed his first King of the Roads title.

In the semi-finals, David Murphy, the gold medal winner from the summer’s Euros, defeated Mick Barry Cup qualifier Nicholas Carey and German champion Henning Fayen, while Aidan got the better of Michael Toal in a last-shot thriller. 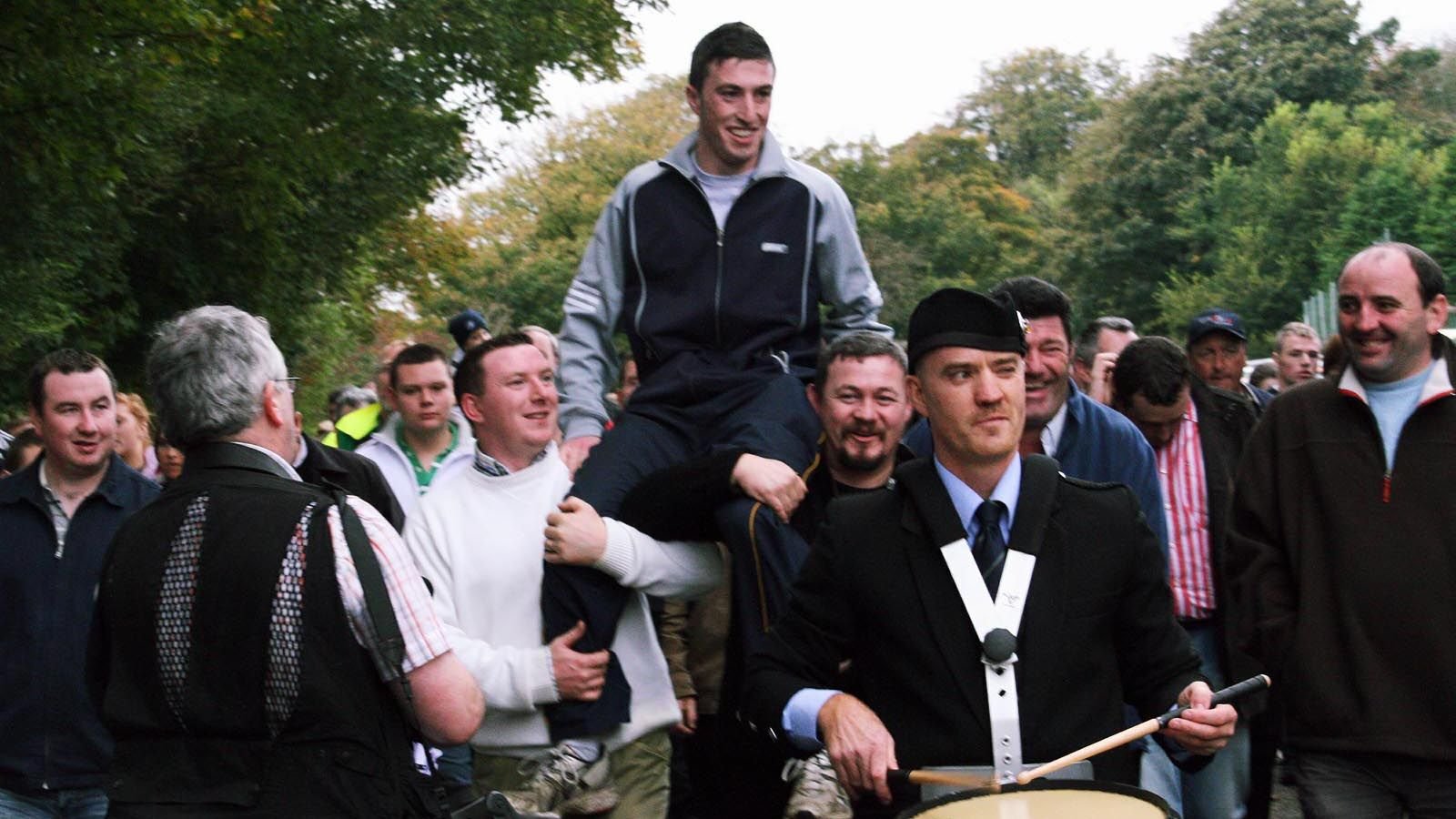 Brinny bowler Aidan Murphy was crowned King of the Roads winner in 2008.

The battle for the Queen crown in 2008 was intense. Marie Noonan, close runner-up in 2007, returned with a vengeance and delivered a barnstorming performance in inflicting a rare defeat on defending champion and European gold medal winner Kelly Mallon in a thrilling Friday semi-final. County senior champion Geraldine Daly was firmly in the mix and won her three-way joust with All-Ireland champion Dervla Toal, who had usurped Kelly Mallon to win the Ulster championship. Simone Davids, Ulster champion, was also in this one. Marie Noonan emerged victorious in the Sunday final with five huge opening shots paving the way for a one-bowl win over Geraldine.

Those 2008 Euros introduced an overseas star from underage rankings who would light up the road bowling world for the next decade. A dual gold medallist in the U18 category, Silke Tulk made an immediate impact in adult competitions winning the Dutch Champions Tour and needed no second bidding to test her skills against the best when the 2009 King and Queen festival came round.

‘The Queen of the Roads victory for Silke Tulk and the manner in which she delivered was one of the great stories of the weekend,’ he wrote.

‘The teenage Dutch star was a hugely impressive performer on the road in the 2008 European Championships, but nobody could have foreseen the mastery she showed in outclassing last year’s winner Marie Noonan in the competition decider. Having blitzed the road with ten magnificent shots, a new record was now in sight and four more of the highest order saw her over the line in an unprecedented 14 shots.’

2009 was significant also from a championship perspective in that it marked the occasion of Michael Toal achieving an unprecedented tenth All-Ireland success. But, and not for the first time, that did not transfer to King of the Roads glory. David Murphy again showed his mastery of the road in claiming his second crown. To Toal’s credit, it was a terrific final as he led Murphy for long periods, but the sheer power of the Brinny man over the closing quarter yielded a last shot after both scored the line in 16 shots. In the Saturday semi-finals Murphy defeated his brother Aidan and German Henning Feyen while Toal overcame Phillip O’Donovan and Dutch champion Bastian Zwiers.

David Murphy and Kelly Mallon lorded it at the King of the Roads during this era. Murphy made it three-in-a-row and four in total when winning in style in 2010 and 2011. Covering the road in a record equalling 15 shots was his forte in 2010 and he needed that quality to see off new All-Ireland champion Martin Coppinger and Dutchman Ivo Egbers in the 2010 semi-final. Coppinger’s opener cracked off unluckily, but Murphy was unbeatable on the day. The pair would engage in a sustained rivalry that would thrill and enthral bowling followers over the next decade.

Almost since its inception, James Buckley, was never far away when King of the Road honours were fought for and he won a cracking three-way semi-final in 2010, defeating Ulster champion, Eddie Carr and German, Ralf Rocker. He had, however, no answer to David Murphy in Sunday’s final and the laurels went to Brinny by almost a two-bowl margin. 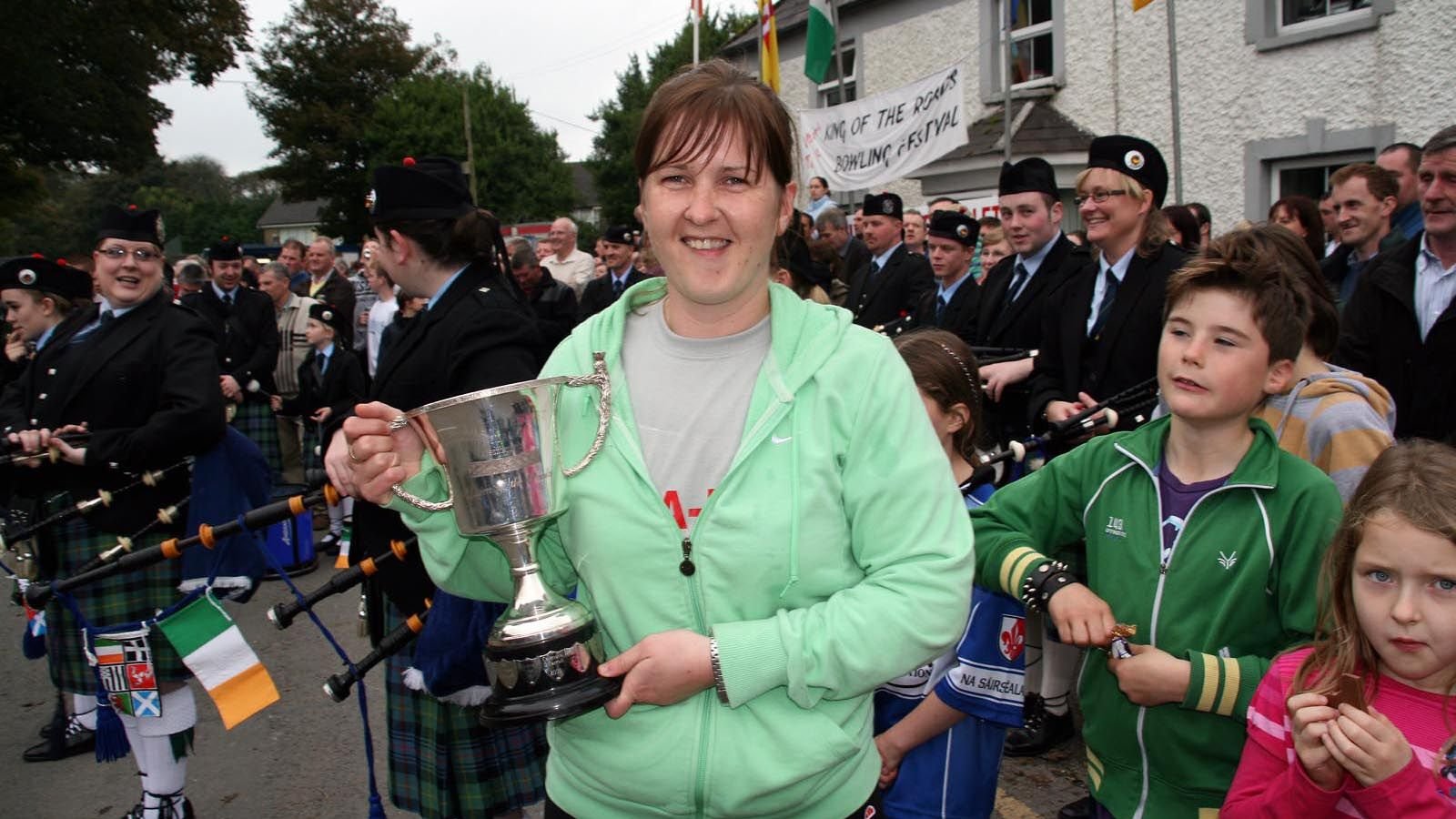 Marie Noonan was Queen of the Roads champion in 2008.

The triumvirate of Kelly Mallon, Silke Tulk and Carmel Ryan would dominate the Queen of the Roads as the second decade of the new century unfolded. All-Ireland champion Mallon dethroned Dutch Queen Tulk in the 2010 semi-final tussle that also included Catriona O’Rourke while Cork’s county champion Ryan won her penultimate round score with previous winner Marie Noonan and German Simone Davids. The final was fiercely fought and in near record bowling, Mallon notched her second Queen title by a bowl of odds.

A shock loss to new Ulster supremo, Conor McGuigan, in the 2011 All-Ireland final at Tassagh did not derail David Murphy’s dominance of the King of the Roads tournament. His crown tethered at times on a dramatic October weekend, particularly as he made a great escape from a two-bowl deficit in the Saturday semi when the formidable McGuigan was again his opponent and looking every inch a national title holder. Two down at the ‘big turn’ playing outward had Murphy in all sorts for trouble but, and not for the first time, a scintillating finish overhauled the deficit. Dutchman Robert Meijir was in the mix in this one too.

Ralf Rocker of FKV Germany, became the first non-Irish finalist when he showed excellent mastery in overcoming Gary Daly and Munster runner-up Christy Mullins in the second Saturday semi. Rocker hit a blistering start in the final, too, holding well over a bowl lead on Murphy at the no-play lines. As he did on Saturday, Murphy’s finishing prowess brought him from arrears, and he claimed a third successive King title by a bowl of odds margin. It would take something special to break the five-year Murphy stranglehold on the King trophy and it would come spectacularly in 2012.

Kelly Mallon remained imperious too in 2011 winning her third queen gong after a thrilling duel with Silke Tulk. The Dutch star’s blistering start gave her commanding odds, but the All-Ireland champion edged a pulsating finish. Kelly also delivered in a hard-fought semi-final with Carmel Ryan, a contest that also included Germany’s Feenja Fredericks. Tulk saw off the challenges of four-time winner Catriona O’Farrell and Denise Murphy in her semi-final.