Agnes O'Gorman, Queen runner-up in 1996/97, and Susan Cullen, Queen champion in 2001, with supporters from Clonakilty, Rosscarbery and The Pike at the 2001 festival.

Part six of our King and Queen of the Roads special highlights a northern double.

THE contribution of Ból Chumann Ard Mhacha has been central to the continuing success of the King and Queen Festival. While they held their own in the many support scores over the years, their sterling efforts to garner major prizes from the feature events had yielded just the one King crown for Michael Toal, won in 1997.

But 2001 changed that sequence as Toal, again, and Susan Cullen scored a northern King and Queen double.

It would be replicated most emphatically in the second decade of the new century. Michael Toal was lording it in the senior championship by 2001. An awesome display at Kealkil had seen off Cork champion Kieran Gould, a victory that completed a four-in-row and saw him eclipse Mick Barry’s record of eight All-Ireland victories in total.

This time Toal brought his best to Ballincurrig. He again defeated Gould in the Saturday semi-final while Phillip O’Donovan staked his credentials with a brilliant victory over the reigning King, Bill Daly, in the second semi. Toal was the complete master in the final, throwing shot after shot with power and precision and was a convincing two-bowl winner at the end.

Armagh’s Susan Cullen, now domiciled in Cork, prepared diligently for her Queen bid. She showed superb form in her qualifying tournament win but the formidable Catriona O’Farrell that year’s championship winner, who defeated Ulster champion Catriona Powell in Friday’s semi-final, lay in wait in the Jim Geary sponsored final and was hoping to win her second crown. It was a titanic battle in which Cullen kept her focus amid a flurry of magnificent exchanges. She garnered a first Armagh Queen victory by a bowl of odds margin.

There was a change from the old order in 2002 when Anthony Gould came and conquered. Brother of 1998 winner Kieran, the new King was a senior of substance in that era and was runner-up to All-Ireland champion James Buckley in the county championship final. At the 2002 festival, Buckley had again proved Michael Toal’s bogey, defeating him in the big-money Saturday semi and was poised to take his fourth King title. Anthony Gould hadn’t read the script and played a faultless score in a ‘gritty, terrier-like performance that silenced many critics.’

Catriona O’Farrell was appearing in her fifth successive Queen final but was still looking for her second win. She achieved it in some style with a terrific victory over Ulster champion Dervla Toal. Two mighty bowls on the long straight secured a richly-deserved second success. Senior champion from that year was Marie Noonan but her hopes were dashed when going under in the semi to the Ulster champion in what was a reversal of their championship encounter at Kealkil.

Following Anthony Gould’s surprise but deserved victory in 2002, the King of the Roads garland would remain firmly ensconced in the City’s northside for two more years. Kieran Gould returned to claim a notable double in 2003 and ’04. Ulster champion Eddie Carr was the new All-Ireland senior title holder and he repeated his championship success over Munster winner Edmund Sexton in the Saturday semi that also included Dutchman Mark Uide Luttikhuis, while the Goulds, Kieran and defending champion Anthony, were joined by Frido Walter of Germany in a contest that 1998 winner Kieran won comprehensively. Leading from start to finish, Kieran Gould delivered a masterful display in the 2003 King of the Roads final defeating the All-Ireland champion by over two bowls. 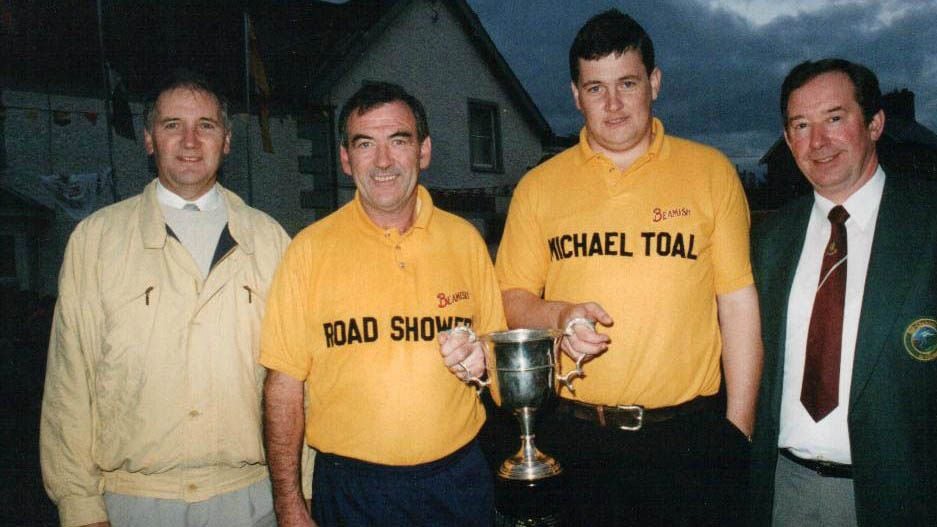 The Armagh contingent had plenty to cheer as Dervla Toal stormed to victory in the Queen final, reversing the previous year’s result, and upsetting the formbook to quite an extent with a thrilling victory over Catriona O’Farrell. A magnificent last shot gave her a first Queen crown. Dervla had to win a hard-fought three-way semi-final on Friday to book her place. Marie Noonan and German champion Kerstin Freidrichs were also in contention. Kieran Gould was at his pinnacle in 2004, All-Ireland champion and reigning King of the Roads as the 20th hosting got underway. He confirmed his dominance with an emphatic two-bowl victory over his northern nemesis Michael Toal in a final that disappointed mainly through the City man’s dominance. When Gould beat a massive opener by Toal, there was no holding him.

His final spot was secured with a hard-earned three-way semi-final win on Saturday when he got the better of county finalist John Shorten and new European champion Henning Feyen of FKV, Germany. Michael Toal just edged a cracking contest with Gaeltacht’s John Creedon to book his place. The Armagh man’s sister Dervla was defending her Queen title, but had to give best in a thrilling set-to with Catriona O’Farrell. Their duels, this their third in row, were now becoming a festival highlight.

The Southern Star report describes the closing stages: ‘The final phase was fought with fierce intensity as, with great bowling, Toal held tenaciously to her 50-metre advantage and that was the way it stood for the last shots. In a final do-or-die effort O’Farrell tracked a mighty drive down the left past ‘Moore’s gate’ to give her opponent a handy mark to beat to retain her crown. To Dervla Toal’s credit she hit the ‘sop’ but the rain-soaked brow was not kind and her bowl fell a metre short to give Catriona O’Farrell the 2004 Queen of the Roads title’.

Dervla Toal had defeated Gretta Cormican and European champion Reena Aldrichs (Germany) in Friday’s qualifier. On the rise, David Murphy won the Jim O’Driscoll Cup in 2004 while Armagh men, Harry and Cathal Toal won the Dick Hudson challenge. There were Cork wins for the Christy Keating/Mike McCarthy combination and for northerners, Cormac Garvey and Bryan O’Reilly.

Parts 1-5 of our King and Queen of the Roads series are available on southernstar.ie