DUBBED ‘The Champions Classic’ by Brian Toal, bowling’s premier non-championship competition, The King and Queen of the Roads festival at Ballincurrig in East Cork, reached a 35-year milestone in 2019.

This phenomenally successful promotion has progressed from humble beginnings in 1985 to establish itself as a bowling event second only in importance and prestige to the All-Ireland finals.

Each participant has earned the privilege of contesting in a King and Queen competition either through possession of provincial or national championship titles or alternatively by qualifying from a specific prerequisite tournament.

Since the turn of the century, it has evolved into a truly international event filled with colour and pageantry. In the following weeks we hope to relive some of the great moments.

The All-Ireland senior final of 1985 was played at Whitechurch and ended in disappointment for Bill Daly’s massive following after a combination of brilliant bowl-playing on the part of Ulster champion Harry Toal, and an ankle injury incurred by the Corkman, saw the Hughie Trainor Cup go northwards by a considerable margin.

Witness to the occasion was the man who would become the King of the Roads foremost advocate and organiser in chief, Lisgoold native Seamus Ó Tuama. In the company of Christy Santry, another leading light in those early days, the possibility of Harry Toal returning to Cork to re-engage with Bill Daly was discussed. The realisation was that it could be the start of something very special, but a major effort was required.

Crucial to getting it off the ground was the co-operation of the very able triumvirate who were responsible for the administration of the sport in Armagh – chairman John Gribben, secretary Aidan McVeigh and treasurer Paddy Comiskey. Gerald McKee, who had close connections with Harry Toal, was also an important conduit and all, including a hard-working organising committee, can take credit for making the King and Queen of the Roads the unrivalled festival of bowling that it is today. 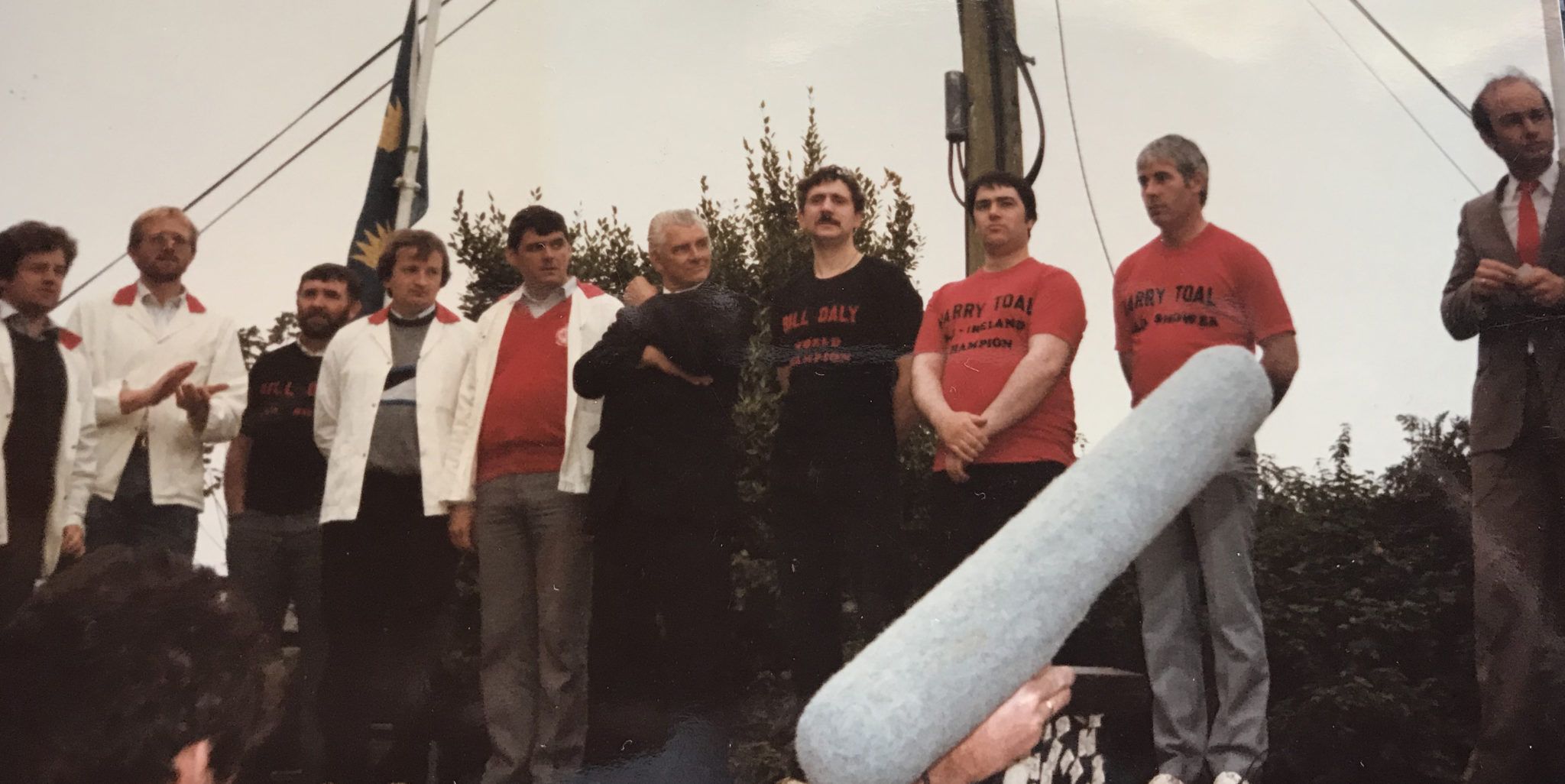 Co-operation was indeed forthcoming from the Armagh executive and soon the stage was stage was set for the inaugural King of the Roads. The event has been a crowd-puller from the start and thousands gathered for the Bill Daly-Harry Toal throw-off on Sunday, October 27th in 1985.

It proved an epic struggle as Toal led early, only for Daly to unleash a 300-metre cannon to the no-play line. It was a shot that stunned the crowd, one that would ultimately have a big bearing on the outcome. It pushed Daly a bowl ahead but Toal fought it tooth and nail. Darkness fell, necessitating a Monday afternoon return to complete the contest with the Corkman holding a bowl lead.

On the resumption the following day, he held his odds and celebrations soon followed as Christy Santry, under the nom-de-plume, ‘28’, reported in the following week’s Southern Star.

‘Champagne corks popped, the crowd cheered, Bill Daly was wearing the laurel garland as he marched triumphantly into Ballincurrig village for the presentation, the undisputed King of the Roads for 1985,’ the report said.

Dick McCarthy, Ballincurrig chairman, asked the victorious Bill to return and defend his title the following year and invited the Armagh men to come and take it from him. The King of the Roads was up and running.

From the start too, a support score was the order of the day and here it was Cork victory also, a surprise one as junior A Dan Kenneally, who would go to win the All-Ireland in the grade in 1990, defeated Patrick Comiskey (Jun), Ulster’s intermediate champion who had just lost out to Mick O’Driscoll, Blarney, in the national decider in Armagh.

There was a heightened sense of expectation ahead of the second hosting. Bill Daly would defend and a qualifying semi-final on the Saturday would see the newly installed All-Ireland champion, Declan O’Donovan of Courtmacsherry, take on the man he defeated in the national decider, Harry Toal, who travelled down for another tilt at the King crown. That whetted the appetite for Sunday’s play-off as Toal, on the cusp of victory, was caught at the finish by the All-Ireland champion’s magnificent late charge.

Over the years the King and Queen of the Roads have produced some incredible finishes and the closing shots of the 1986 final certainly lived long in the memory. Playing into the village, Declan O’Donovan had done the hard work, forging a bowl of odds in front with excellent shot-making, only for a miscalculation with his second last allow Daly to close the gap to 30 metres.  It was the opening the Leap native wanted and he unleashed a monstrous cast past the finish line that gave him his only fore bowl of the score and his second King of the Roads garland.

Armagh scored success in an U18 contest for the Smart Bar Cup when Aidan McCreesh got the better of Cork’s champion, Finbarr O’Donovan.

A new champion ruled the roost when the 1987 festival came round. Seamus Sexton, from Nadd in north Cork, vanquished all before him that summer in a thrilling run to All-Ireland senior glory and was the hot fancy to dethrone Bill Daly. In Saturday’s King semi-final, Daly was in top form, easily defeating his fellow county man Jim O’Driscoll while Sexton was equally impressive in accounting for Armagh’s Pat Comiskey, who substituted for the injured Ulster champion Gerry Boylan.

Sunday’s final played on the inward route was an anti-climax as Sexton strode to a comprehensive victory thanks in the main to a thundering drive down the long straight. Daly was off form on the day and never looked like achieving a hat-trick of King of the Road titles, but he would be back.

Surprisingly, too, for a man of his stature it would be Sexton’s only success at the festival. 1987 also saw the introduction of Michael Toal to Ballincurrig and it was not a winning one as Michael Wall avenged his U18 All-Ireland defeat in a thrilling contest. The doughty Pat Mallon, though, came good for the Armagh men with a spectacular display when defeating Dave Coffey of Cobh.