John O'Driscoll and Antje Schottler were crowned King and Queen champions at Ballincurrig in 1996.

1996 would prove a watershed year for the King of the Roads competition. The tenth European Championships at Tubbergen in Holland had provided some thrilling fare and Seamus Ó Tuama, with his intrepid team, sensed possibilities for expansion of their October festival.

Two major advancements were announced – an international dimension would be introduced and a Queen of the Roads, on a par with its King counterpart, would also now form an exciting new addition to the festival weekend.

The Germans had usurped the Irish at their own game at the Dutch championships five months previously, winning gold in the men’s and women’s road bowling events. They were now in Ballincurrig with lofty ambitions to capture King and Queen of the Roads titles. They made quite an impression.

Frido Walter, the new European champion representing FKV Germany, was pitched in against Cork’s new county champion John O’Driscoll and Templemartin’s Jerry Murphy in a three-way Saturday semi-final. O’Driscoll’s blazing start took him to victory and the place in Sunday’s decider, but Walter showed what he was capable of with a superb finish to outscore Murphy for second spot. Defending champion James Buckley confirmed his dominance over Michael Toal, the then All-Ireland champion, in the second King semi-final which was played in atrocious conditions. In Sunday’s final John O’Driscoll put in one of the great Ballincurrig performances, defeating Buckley by almost three bowls of odds to capture his first King trophy. 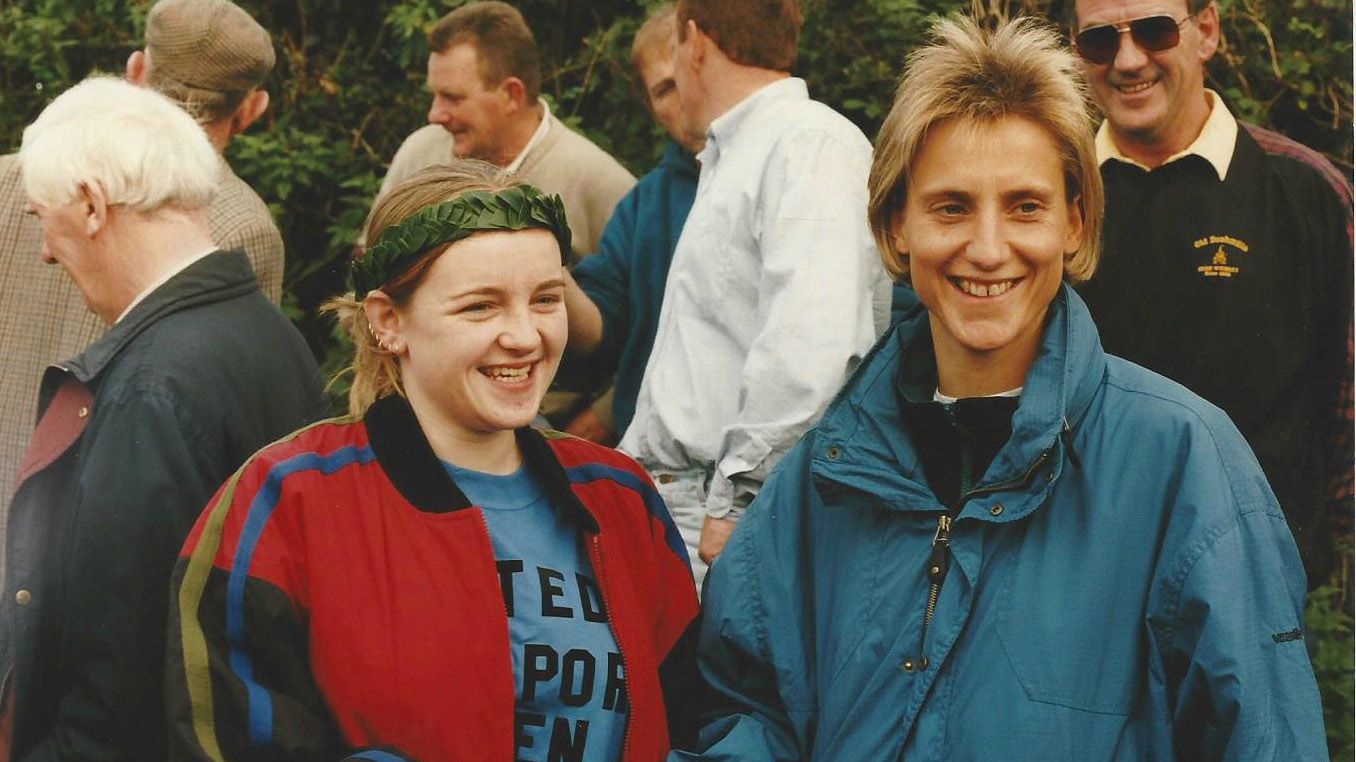 Kathleen Cooney, left, Queen of the Roads winner in 1997, pictured with Antje Schottler.

Meanwhile the Queen of the Roads was up and running. The first event was a qualifier on the Friday between Cork’s Kathleen Cooney and Ulster champion Aine O’Neill from Tyrone. A thriller it proved to be with Cooney shading it in the final throw. A three-way first Queen final had the Gaeltacht lady in against All-Ireland title holder Agnes Hurley-O’Gorman from Clonakilty and the European champion, the formidable German Antje Schottler.

Kathleen Cooney may have suffered from the effects of her Friday exertions and was off the pace leaving O’Gorman and Schottler to fight it out. An epic duel ensued. The Clonakilty champion seemed to have it coming on to the ‘green’ on the inward route but, as the report highlights, ‘she had to give best to the powerfully athletic north German player in a rip-roaring, sensational finish when, with an astounding last throw, Antje Schottler snatched an unlikely victory against all the odds on her first visit to Ballincurrig.’

The 1997 hosting would bring another first. By then, Michael Toal was a five-time national senior champion, having proven himself on the biggest stage in some memorable finals at Ballingeary, Bandon and on his home Cathedral Road. Yet, for his vast following, his King of the Roads performances were disappointing. While he remained a huge draw, his ten years of trying had seen him succumb to a litany of defeats, many from winning positions and he had been a beaten finalist on three occasions.

Ironically, his form coming into the 1997 festival had been patchy. He was below par in losing the All-Ireland final to John O’Driscoll at Fernhill and was not overly impressive in overcoming the challenge of Dan O’Halloran in the Saturday King semi-final. His opponent on Sunday was his old nemesis, Pat Butler, who had defeated holder O’Driscoll in the second penultimate round score and who was the hottest of favourites to claim his fourth King crown.

Sunday’s final was played on the inward route and Michael Toal choose the day to banish his Ballincurrig demons. In a cracking duel, Toal followed a monstrous Butler effort down from the no-play lines and then withstood relentless pressure to claim a historic victory. A rocket of a last shot set in train unprecedented and indeed extraordinary scenes of celebration among a euphoric and largely relieved northern following.

Antje Schottler came to defend her Queen title but was well below her ’96 showing. It was left to Kathleen Cooney and Agnes O’Gorman to battle it out at the front of a three-cornered shoot-out. O’Gorman had defeated Catriona Powell in Friday qualifier. Different to the previous year, the Irish ladies outbowled the German champion with the Clonakilty player to the fore as the closing stages neared. Again, agonising defeat was to be her lot as Kilcorney bowler Kathleen stormed home with a magnificent last shot to become the first Irish holder of the Ulster Transport Queen of the Roads title.

There was a break from the old order in 1998 when new champions were crowned. Kieran Gould had deprived John O’Driscoll of a hat-trick of senior championship titles and, although losing out to Michael Toal in the national decider, was looked on as a real contender for the King of the Roads title. So it turned out as he overcame Dan O’Halloran in the qualifying semi to go head to head with three-time previous winner James Buckley. Michael Toal’s reign lasted just the 12 months as Buckley again proved his master in the second semi.

The final was a hard-fought encounter with Buckley in control for most of the way, but Gould stayed close and from 40 behind for the last shots, fired the winner. 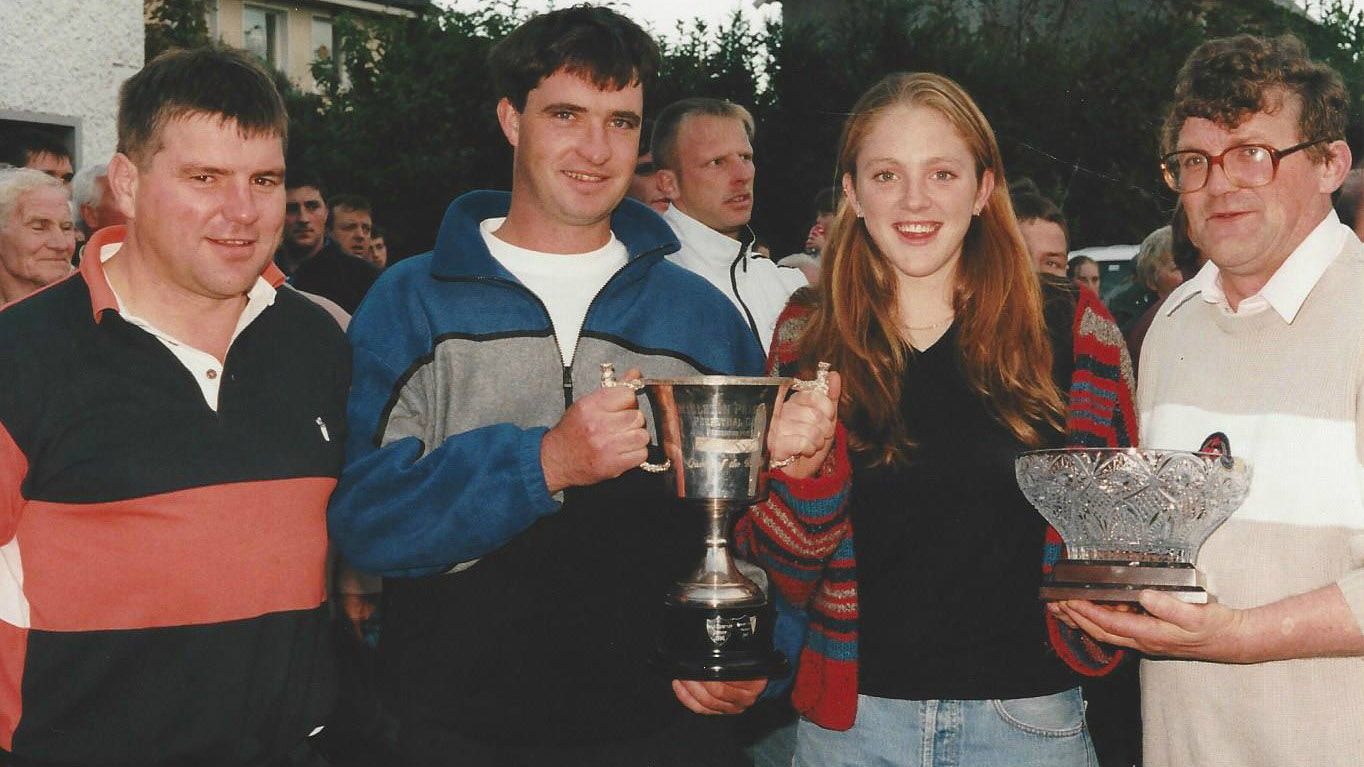 The Queen of the Roads shoot-out unveiled a rising star. Gretta Cormican and her peers had brought women’s bowling to unprecedented heights and the Lyre champion had just won her seventh national title. She was at the peak of her powers and defeated Ulster champion Catriona Powell in Friday’s Queen semi-final play-off. Coming through the qualifying tournament was 19-year old Catriona O’Farrell, a prodigy of rare talent now facing her biggest test. Their final generated enormous interest and it lived up to its billing. Some early chances went a begging and it developed into a shot-for-shot duel. Catriona O’Farrell fulfilled her pre-festival promise, beating a big last shot from the All-Ireland champion for a spectacular success and it wouldn’t be her last.