IT was a schoolboy error that would make Fintan McCarthy wince. Perhaps it explains why he has an Olympic gold medal and I have a pair of white Adidas trainers with faint paw prints on them. You live and learn in this world.

Fintan is the man with an Olympic gold medal and a smile as wide as the River Ilen since last Thursday’s heroics in Tokyo, and he is also a man who likes to plan. That forensic approach serves him well. It lessens the chances of making mistakes, while increasing his chances of becoming an Olympic champion. He can tick that box now.

Then there’s me: The Man Who Thought It Was A Good Idea To Wear New, Brilliant-White Adidas Trainers On The Busiest Day In Years.

That wasn’t a good idea. Fintan wouldn’t have made the same mistake. Neither would Paul O’Donovan or any of Skibbereen Rowing Club’s Olympians. Lesson learned on this end. As Dominic Casey preaches, keep it simple. I didn’t and Fintan McCarthy’s family dog, Albie, the Golden Retriever, took the opportunity to teach me a lesson.

Albie was as excited as the rest of Fintan’s family – parents Tom and Sue, and siblings Jake and Caitlin – when we (Star Digital Manager Jack McCarron and myself) called for a chat for the Star Sport Podcast on Thursday afternoon. Well, Albie possibly wasn’t as excited as Jake who gate-crashed his parents’ interview live on RTÉ in the early hours of the morning after Fintan’s glorious gold in Tokyo, but, still, Albie was in top form. My brilliantly-white trainers paid the price, but those paw prints are one of many souvenirs of a memorable day in Skibbereen. 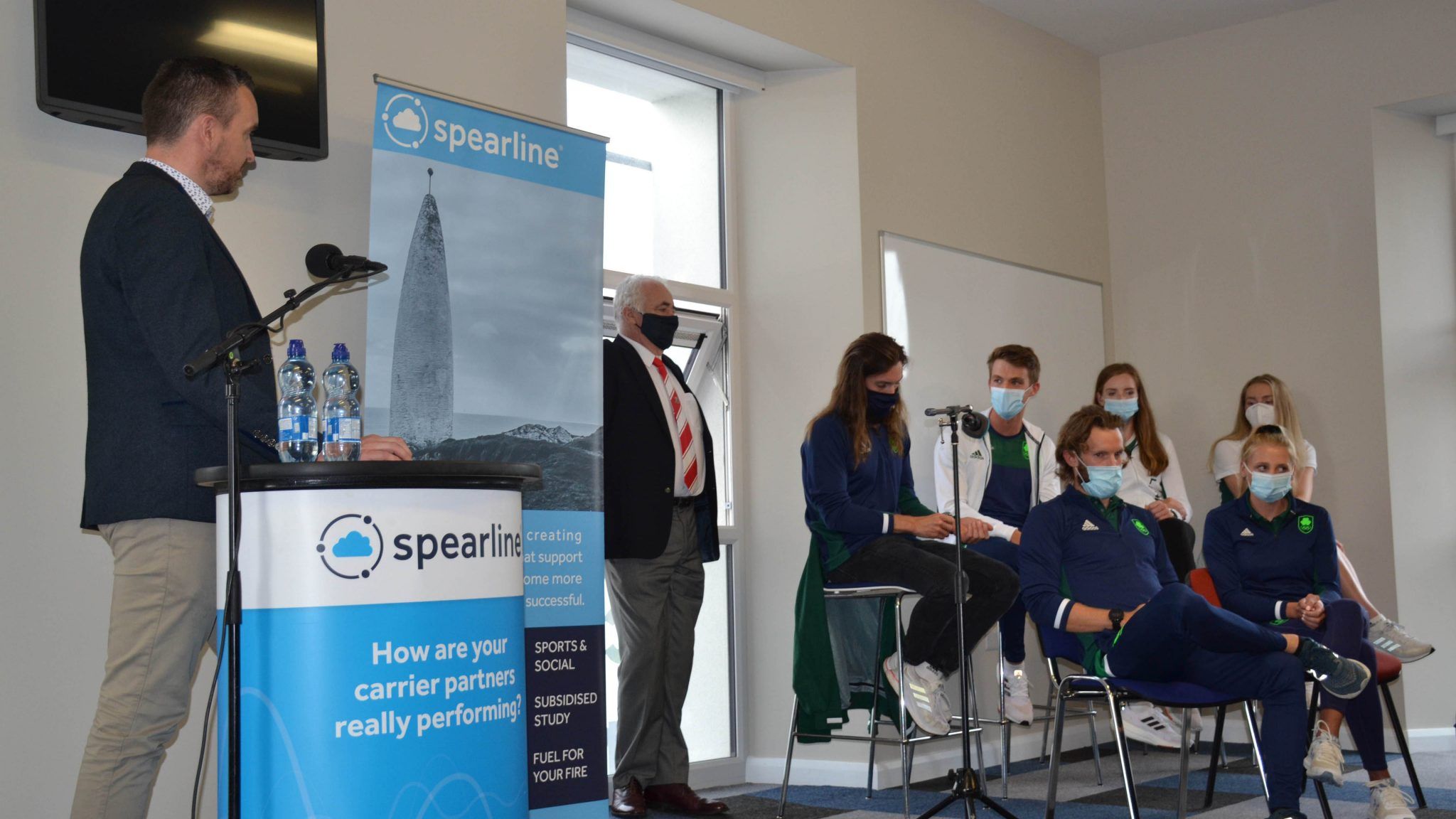 In the early hours of the morning, two men from this town – Paul O’Donovan and Fintan McCarthy – conquered the world when they won the lightweight men’s double final at the Olympics in Tokyo. It’s the first-ever Olympic rowing gold medal for Ireland, and it was won by Skibb men. That’s fitting, as it was Gary and Paul O’Donovan who won Ireland’s first Olympic rowing medal in Rio 2016. They’re keeping it in Skibb.

Thankfully, there was no twist in this Tokyo tale as the favourites, Paul and Fintan, came out on top. As the Skibb duo celebrated in Tokyo Bay, back home the party started, but only after Fintan’s twin brother Jake got his nightly dose of Love Island. The drama there didn’t match what unfolded over the 2000-metre course in Tokyo, but it helped pass an hour before the Olympic final at 1.50am.

‘We recorded Love Island and we were able to watch that around 10 or 11 to keep us at bay for an hour. We are very invested in it this year,’ Jake explained, but the McCarthy’s nightly debrief of the goings-on in Majorca have been put on hold this week after Fintan, Paul, Olympic bronze medallist Emily Hegarty and all the Skibbereen Olympians arrived home on Sunday.

Love Island can wait for now, Jake said on Monday night as Skibbereen Rowing Club held a club reception for its heroes at the HQ of its main sponsors, Spearline. The celebrations, though different to what we saw in 2016, are unique to now, and just as special. They included an impromptu drive-by in Skibb on Sunday night when, with Mary Hegarty as the chauffeur, Fintan and Emily were driven through the town, with locals pouring out of homes, shops and pubs to catch a glimpse of their rowing heroes and their spoils from war: Olympic gold and bronze medals.

Their success has given the town and West Cork a lift. This incredible rowing club sent six athletes and coach Dominic Casey to the Olympics. Three Ireland rowing boats have now won Olympic medals – and all three boats have had Skibb rowers pulling and dragging and inspiring. The club now has the full set: gold, silver and bronze. The secret to winning Olympic rowing medals? You need Skibb rowers.

This town of rowers was alive, too, on Thursday morning, hours after Paul and Fintan’s gold, and just 24 hours after Emily’s bronze with the Irish women’s four; there’s an argument to be made that the legacy of the women’s four’s success, and how it can inspire a generation of young girls, could in fact be the bigger rowing legacy from these Games. 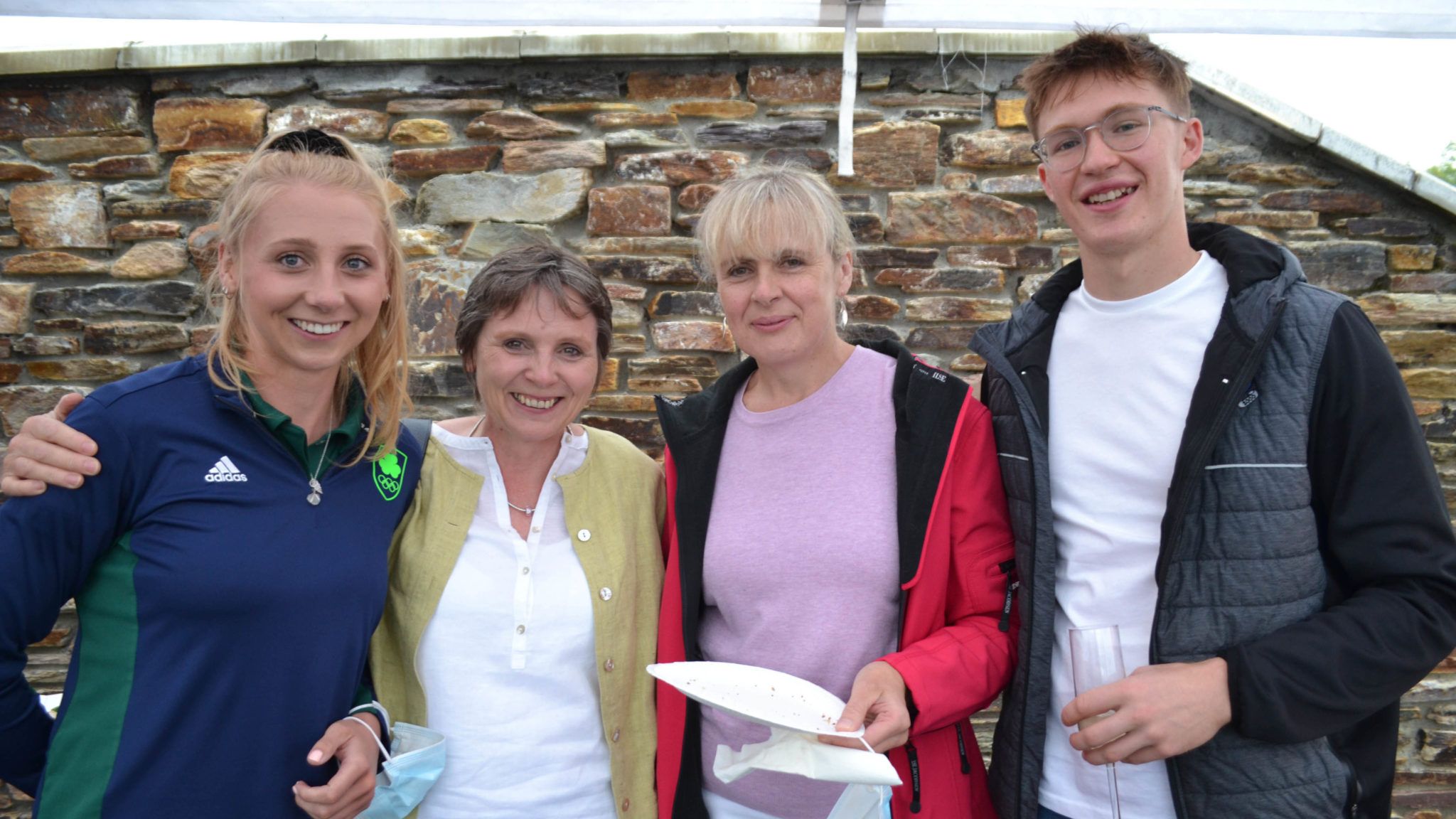 Irish Olympic rower Lydia Heaphy with her mum Debbie and Mary and Dermot Hegarty at the reception in Skibbereen on Monday.

Anywhere you turned on Thursday, there were Skibb rowers, past and present. Club President Nuala Lupton, the club’s first-ever international rower, was putting in her shift in the club’s pop-up shop on North Street that had a queue outside it. Outside, Orla Hayes, one of the club’s most decorated athletes, was chatting to Emily Dulohery, a rower and coach at the club. No guess as to what the conversation was.

Two-time Olympian Eugene Coakley had timed his trip home with his family to perfection. On Thursday he soaked up the atmosphere downtown and had lunch in Field’s coffee shop, looking out at the sign in the square that has a photo of all the current Skibb Olympians. Coakley wanted gold in Athens 2004, but came up short. Now two Skibb men have brought that gold back to the town of rowers. A central character in this blockbuster is the unassuming hero, Paul O’Donovan, a man thrust into the glare of the spotlight again and a man able to reach for quotes from pre-Socratic philosopher Heraclitus as fast as he can move a boat on water.

‘A man can never fall in the same river twice,’ Paul said ahead of the Games, explaining ‘that’s because he’s a different man and the river is always moving and changing as well. I’m a bit of a different person going into this Olympics.’

He landed home from Tokyo on Sunday somewhat different, too, in the eyes of the nation. He’s a man who now has an Olympic gold medal and even in a rowing town like Skibb, where ‘pots’ from the national championships and international rowing medals are accepted currency, gold is different. So, too, is the mentality and approach of these Skibbereen rowers. In a Q&A session upstairs at Spearline on Monday, Paul gave a fascinating insight into their approach. Perhaps, too, revealing more about himself, and his pursuit of perfection. It was also the time to call on Heraclitus again.

‘The method to our success is not this one perfect training plan or one formula, it’s a hell of a lot of hard work,’ Paul explains.

‘Also, it’s a constant strive to be better. It’s never perfection because we know we’ll never get there but we are always looking to get better each and every day, always looking for errors in what we are doing and try to correct that. As I have alluded to in other interviews about my friend Heraclitus, who keeps falling in rivers, God love him, but he said the one thing that is constant in this world is change. That’s also one of the secrets to success, that we are not afraid of change, we are ready to embrace it and take it on, tackle it up front and kick its hole!’ 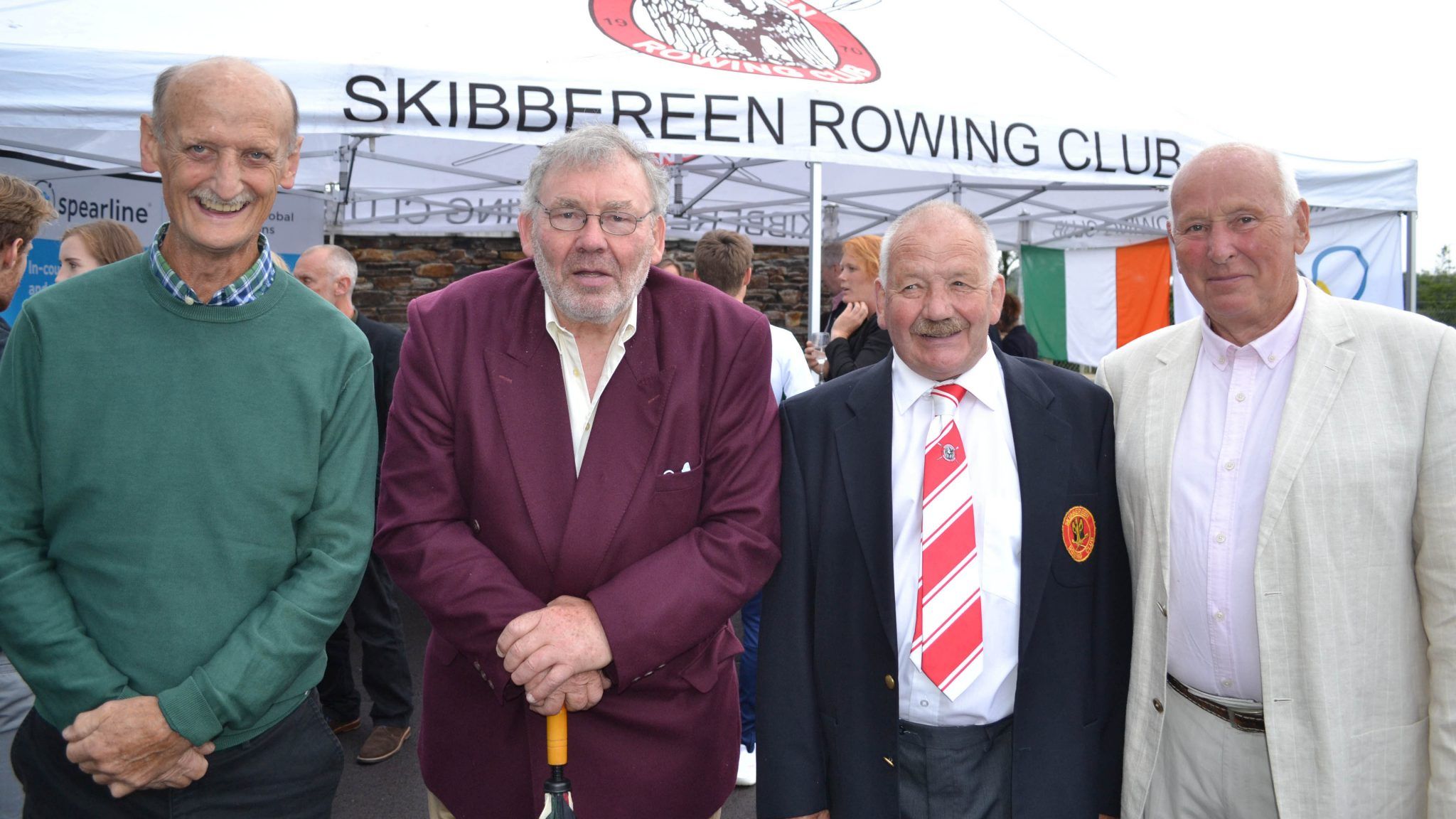 The rowers themselves won’t change, though. Fintan is still Fintan, he explains. It’s just another gold medal, he reasons. Emily won’t change and neither will Paul who, we believe, was out on the water on Monday morning, the day after he arrived back home. Just like the River Ilen, Skibb rowers never stop. Hours after the Olympic gold medals were won last Thursday the club’s young members were on the water, walking the same footsteps as their Olympic heroes. But everyone’s walking that little bit taller now, proud of what Skibb’s rowers have achieved on the world stage, again. Their planning has paid off and they have the medals to show for it. I didn’t plan and I spent five minutes with a cloth trying to clean those white runners: whose shoes would you rather be in?