The moment of truth: Valley Rovers captain Noel O'Donovan lifts the cup after his side's victory over Na Piarsaigh in the county PIFC final at Páirc Uí Chaoimh. 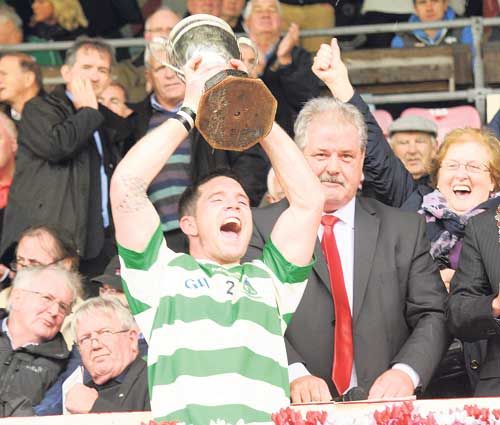 The moment of truth: Valley Rovers captain Noel O’Donovan lifts the cup after his side’s victory over Na Piarsaigh in the county PIFC final at Páirc Uí Chaoimh.

VALLEY Rovers collected a second county premier intermediate football championship title in six seasons when completing a four-match winning sequence at the expense of Na Piarsaigh in the final.

They spent just two years operating in senior ranks following their promotion in 2009, but they have good cause to be optimistic about their prospects of enjoying an extended run in the top flight in the wake of their latest triumph.

Featuring several players involved in the club’s county U21 triumph last year, it’s a fair bet that the best is yet to come from the team, which isn’t lacking in experience either, with such as Kevin Canty, Alan Quirke, David Lynch, Fiachra Lynch, Hughie O’Donovan and Stephen Manning numbered among the survivors from the 2009 side.

Ger Slyne – ably assisted by his co-selectors Mick Murphy, Sean Murphy, TJ Deasy and Martin Cronin – had the satisfaction of steering Valley Rovers to PIFC glory in his first season at the helm, and he admitted he was very hopeful they would go all the way at the start of the campaign.

A selector in 2013, Slyne felt they hadn’t done themselves justice when bowing out to Macroom in a semi-final replay in 2013, insisting they had allowed the Mid Cork side off the hook in the drawn match.

‘We were ahead with a couple of minutes to go, but we didn’t close out the game, and we just didn’t show up at all in the replay,’ Slyne said.

‘With the younger guys a bit more mature, I felt we were capable of going further this year, although I knew we’d have to tread warily in every game, because there are no soft touches in this grade.’

In coming through a couple of tough encounters with Ballinora and Grenagh, Valley Rovers booked a semi-final berth for the second year on the trot, but Slyne felt that more would be required in order to see off Carrigaline at that stage.

‘In our first game, Ballinora came with a game-plan that almost worked, they hardly played any attacking football, and we were made to battle very hard for a seven points to four win,’ he said.

‘There was a bit more football in the game against Grenagh, and we went 1-6 ahead after about 18 minutes, but they came back at us strongly, and we needed a few late scores to secure a six-point win.’

Having earlier eliminated two of the leading contenders in Macroom and Nemo Rangers, Carrigaline would have been brimming with confidence heading into the South-East derby showdown with Valley Rovers, so it was easy to appreciate why Ger Slyne was convinced his charges would need to be firing on all cylinders if they hoped to prevail.

‘Carrigaline had class all over the field, they had three current Cork U21 players, they had a couple of Cork minors as well, and they had the Murphy brothers Nicholas and Peter, who have given the club such tremendous service over the years,’ the Valleys boss said.

‘Fortunately, we produced our best display of the year, with Fiachra Lynch showing the Midas touch in attack on the day to score 2-7 from play.’

Valley Rovers’ 3-13 to 0-13 victory over their Carrigdhoun neighbours was all the more laudable considering they had a player sent off before half time, and Slyne revealed that, after beating Carrigaline, he was satisfied they would take a lot of stopping in the final.

‘It was the proverbial game of two halves against Na Piarsaigh, because of the very strong wind, and we took a long time to make the most of it when we had it to our backs in the first half,’ he admitted.

‘But we got four or five scores in the last five minutes before half time, which gave us a nine-point cushion, and we defended well in the second half to run out winners by four (0-12 to 0-8).

‘It was a tremendous feeling to have won the premier intermediate title, it put the icing on the cake after the county U21 success last year, and it’s obviously a massive boost for the club going forward,’ said Slyne, adding that the depth of the panel was a key factor in Valley Rovers’ achievement.

‘We had 34 players on the squad, and we had identified five or six guys before every game that we could bring into certain areas if things weren’t working out for us.

‘Everybody trained hard going back to last January, we didn’t have fellas giving us petty excuses, because there was a belief there that we could give the championship a right rattle.

‘When you have young fellas thinking like that, it makes it so much easier for the selectors and the management to drive them on, and I suppose the bottom line was that the lads wanted to do it for themselves.’

While accepting it was a fairly young team, Slyne felt that the input from the more experienced players was crucial over the course of the campaign.

‘Kevin Canty was suffering from a long-term injury last year, which prevented him from performing to his peak, but, fully recovered, he was a great talisman for us at midfield this year.

‘It was also a massive plus to have the likes of goalkeeper Alan Quirke, who, having retired from inter-county football, gave us huge commitment, and Fiachra Lynch going so well, and, in the final analysis, that made a big difference.’