IN these unusual times, nostalgia is forming a significant portion of our sporting diet. In motorsport, rallies, particularly the Cork ‘20’ International Rally both in 2006 and ’07, are a great reminder of the glory days and the high calibre entry they attracted.

The 2007 season was always going to be somewhat different for rally organisers and fans, especially with Rally Ireland making its debut as the penultimate round of the World Rally Championship. With many of the top crews never having sampled the Irish terrain, events such as Galway, Donegal and Cork provided the World Rally drivers with the opportunity to gauge the Irish terrain.

Marcus Gronholm (Ford Focus WRC) sampled it (Irish terrain) in Galway, Loeb did likewise in Donegal and both won the respective events. However, the 2007 Cork ‘20’ was notable for the presence of not just one, but three World Rally stars – French ace Sebastien Loeb who went on to become a nine-time world champion was joined by Spaniard Dani Sordo and Finland’s Mikko Hirvonen, who helped Ford win the manufacturer’s title in 2006 and 2007.

Loeb certainly left his mark in Ireland in 2007, winning in Donegal and Cork before going on to win Rally Ireland on its debut in the WRC. On the Cork ‘20’ he had a winning margin of two minutes 21.5 seconds over his Citroen team-mate Dani Sordo. Loeb was behind the wheel of a Citroen C4 WRC with Sordo on board a Citroen Xsara. At the end of the rally Loeb described the stage at Kilnamartyra as the best tarmac stage he had ever driven. That’s high praise indeed.

In recent days The Southern Star caught up with the clerk of the course of that event, Carrigaline’s Frank O’Mahony, a well-known competitor and official within Irish rallying. Originally from Drimoleague, Frank, who won the Fastnet Rally on three occasions, told some interesting stories about that Cork ‘20’.

The date of the 2007 Cork ‘20’ was changed to suit the possibility of allowing the WRC crews use the event as a Rally Ireland shakedown. Having travelled to several rounds of the World Rally Championship earlier in the year (2007) O’Mahony was constantly building a good rapport with the World Rally teams and drivers.

‘Alain Penasse, who is now with Hyundai, was a big help to me in making the contacts,’ O’Mahony said.

While three drivers turned up in Cork, it could have been more, as Frank explained.

‘I spoke with Petter Solberg as well and Phil Mills (his co-driver) was doing his level best to persuade David Richards (boss of the Subaru WRT) to let them come. We had a meeting set up during Rally Norway and I spoke to him, but unfortunately they could not get the budget together, Solberg was very disappointed, O’Mahony revealed, but Solberg wasn’t the only one that slipped through the net.

‘When Marcus Gronholm discovered that Loeb was coming, he also wanted to do the event. Unfortunately, that didn’t work out either.’

‘There was a great buzz all around the place, even at the test stage out in Watergrasshill and at the ceremonial start in the Grand Parade. Aside from the WRC drivers there was a massive entry,’ O’Mahony said. 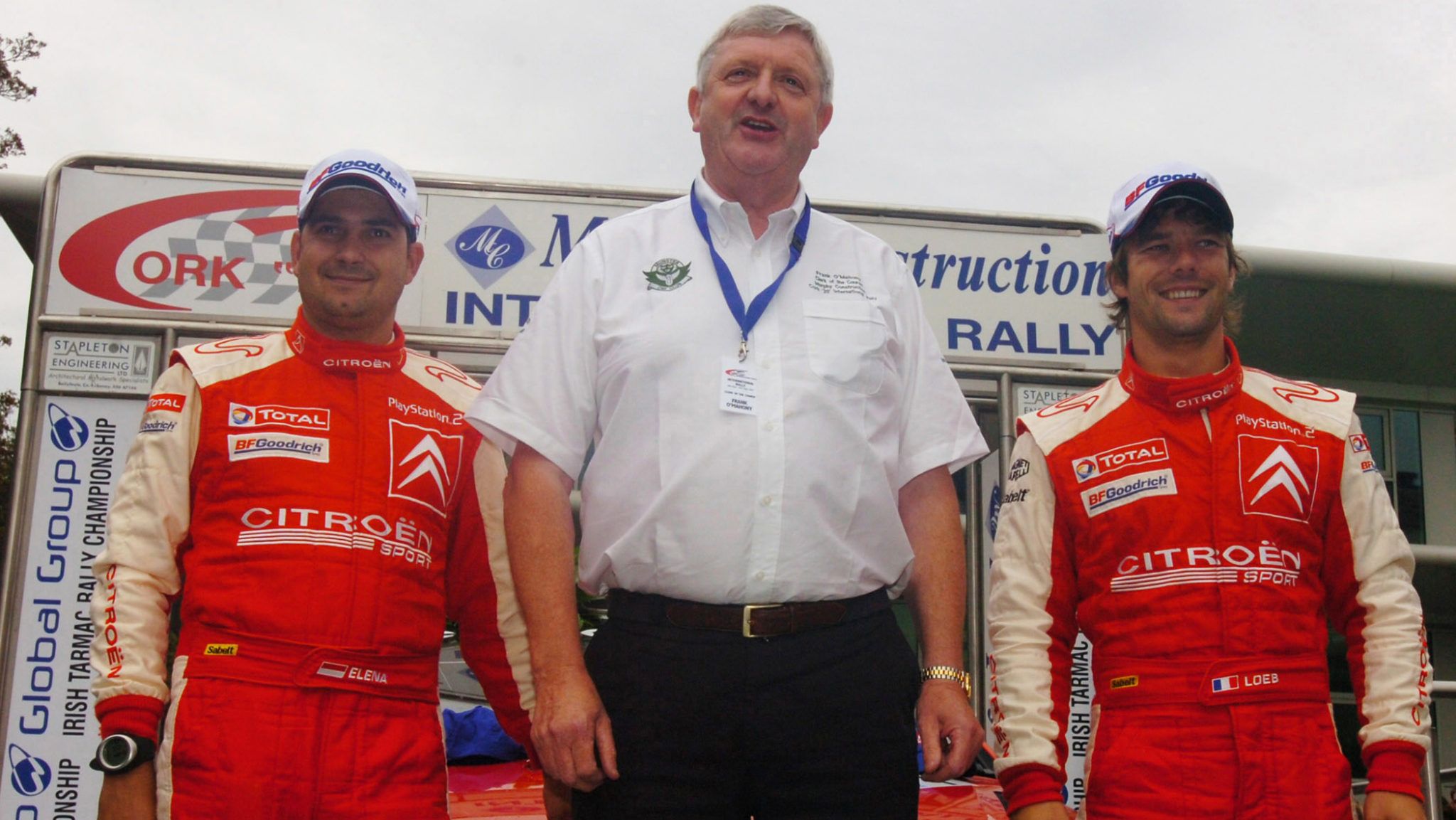 Clerk of the course Frank O’Mahony (centre) pictured with Sebastien Loeb (right) and co-driver Daniel Elena at the winning ramp of the 2007 Cork '20' International Rally.

‘What the WRC drivers found extraordinary was that while the stages were twisty and bumpy, they were still reaching phenomenal speeds whereas on the continent, they were more accustomed to hairpin after hairpin up and down the side of a mountain. They really hadn’t driven on anything like this and, as you know, there is nothing like Irish tarmac,’ O’Mahony said.

At the end of the Saturday’s stages Loeb led his team-mate Sordo by a minute and 14.3 seconds. O’Mahony revealed that Loeb, whom he spoke to at rally headquarters that evening and while he couldn’t pronounce Kilnamartyra, he quoted the stage number.

‘Loeb said to me, “Stage 5, the best tarmac stage I have ever driven”.’

O’Mahony also got a similar reaction from Daniel Elena, Loeb’s co-driver, and from Dani Sordo. Interestingly, O’Mahony also revealed: ‘I found out later that Loeb had only planned to contest Saturday’s stages and had intended going back home that evening – but he enjoyed the day so much, the stages and the atmosphere, that he cancelled his plan and stayed on for the second day.’

Earlier in the same week Loeb/Elena had to attend an FIA function in Paris. Connections and contacts ensured they were able to travel and still be back in time for the event with Kerry driver Alan Ring helping to link up the relevant flights.

During the recce Loeb incorporated a visit to the Toy Soldier factory at Kilnamartyra and after the rally – having posted the fastest time on the stage – he was presented with a very unique chess set.

Many seasoned rally drivers were high in their praise for the rally including the service parks at Macroom and the Cork Racecourse (Mallow). Renowned RPM television presenter Plum Tyndall told O’Mahony it was one of the top three rallies that he have ever been at in the world.

When the pair met at this year’s Galway International Rally, Tyndall reminded O’Mahony of those same words. The RPM presenter was provided with a cherry picker positioned high above the village to get that extra special footage, as Loeb and the rest went through the village watched by hundreds of spectators.

Asked for his own description of the stage O’Mahony said. ‘Kilnamartyra is a stage that may not be as well-known as Moll’s Gap or the Tim Healy Pass. Way back it was a former Circuit of Ireland stage and an old Cork ‘20’ night time stage. It is a very demanding stage. It has everything really – there are fast parts in it, it is bumpy, twisty, the surface, particularly in the dry is good. I would sum it up by saying it’s a real driver’s stage.’