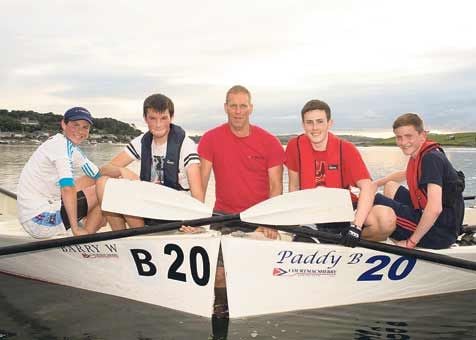 FOUR years after hosting the Cork County Coastal Rowing finals in Broadstrand, Courtmacsherry for the very first time, the Courtmacsherry Rowing Club hosts this year’s county championships at the same venue this Sunday.

Of course, the 2011 event was the precursor for a very successful All-Ireland Rowing Championships at Broadstrand and that event will be the template for Sunday’s event.

The county finals will feature the West Cork coastal rowing clubs against the East Cork counterparts in a regatta consisting of some 25 races with as many as 14 boats per race.

Proceedings begin at 9am with the last of the 25 races – for many the feature race – the senior men’s race, expected to start at around 5pm.

The medal presentation ceremony takes place immediately afterwards. In terms of competitors, it is expected that there will be in excess of 600 individuals participating, ranging from U12 boys and girls to masters’ men and women.

There is no admission fee while the official programme and on-site parking are also free of charge.

The Courtmacsherry organisers are also having on-site catering – a successful part of the All-Ireland series in 2012 – with a range of reasonably priced hot and cold food available.

There will also be specialist food stalls at the event serving tea, coffee, ice cream and pancakes.

The county finals coincide with the final weekend of the Courtmacsherry Harbour Festival that will include a fancy dress parade and a fireworks display.