Having fun: Ann-Marie Daly with Niall and Anna from Bandon pictured at Drinagh for the big game on Saturday. 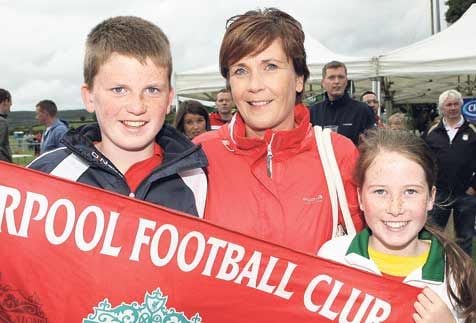 Having fun: Ann-Marie Daly with Niall and Anna from Bandon pictured at Drinagh for the big game on Saturday.

WEST Cork has left a lasting impression on the Liverpool players who turned out for the Anfield club’s Legends’ XI in Canon Crowley Park last Saturday.

‘It is has been an absolute pleasure to travel over to West Cork but we love Ireland in general anyway as the hospitality is always top class,’ commented Liverpool’s Jason McAteer.

‘It is great to help such a worthy charity in Cancer Connect but you can’t do it without a crowd turning out and putting their hands in their pockets so they are the people who deserve all the thanks to be fair.

‘Wherever you go in Ireland you always come across Liverpool and Manchester United fans because of the of those two club’s legacy with this country. I thought this weekend’s event was a great success with so many fans coming to Drinagh and getting behind us.’

McAteer’s teammate Phil Babb was equally impressed with his visit to the region and pleased to be involved in such a competitive game against a committed Drinagh Rangers.

‘It was a great game, as I’m involved in a few of these event every year over here in Ireland and this one was well contested,’ noted the former Irish international central defender.

‘I say yes every time I’m asked to represent Liverpool. It doesn’t matter where the game is, West Cork or the West Indies, I always enjoy representing the club.’

Jimmy Carter and John Wark were two other former Liverpool players to don the famous red jersey at Canon Crowley Park and both made an equally big impression on the local road bowling community.

‘This was my first time visiting the West Cork area but I have to say, as I always do about the Irish people, we were made to feel incredibly welcome by everyone we met,’ commented former Millwall, Liverpool and Arsenal winger Jimmy Carter.

Former Scottish international Wark had previously visited Cork City but, like Carter, was taken aback at the beauty of the West Cork region and friendliness of the local residents.

‘I really enjoyed the weekend and the road bowling was a highlight. I’m hoping to bring it back to Suffolk with me because we have similar roads and tractors there! I can’t believe the way the lads managed to stop the traffic during the bowling but all in all, we enjoyed a great weekend here in Drinagh.’

Euro ’88 and USA ’94 goal-scoring hero Ray Houghton expressed his delight at visiting the south-western part of the county for the first time.

‘I’ve been to many places around Cork but not the west until this weekend but it has been absolutely superb since we got in the van from the airport,’ said Houghton.

‘The hospitality has been nothing short of incredible and our hotel staff were brilliant to us. We played a round of golf on Friday and everyone at the club there couldn’t have been nicer. It has been an absolutely brilliant trip and every one of the Liverpool lads has enjoyed themselves.’