Jake McCarthy - and his twin Fintan - finished fifth in the lightweight men's double at the 2019 European Championships.

JAKE McCarthy admits that he still doesn’t know if he is 100 percent recovered from the back injury that has dented his chances of becoming an Olympian this year.

He’s feeling a lot better than he did for large chunks of 2020, but he’s not at full tilt yet.

It’s a balancing act right now. He’s pushing himself, but not to point that sends him hurtling back to square one that included long days of lying on his back at home in Aughadown and staring at the ceiling.

‘I’m not doing that much still. I have to build it up slowly just in case I aggravate it,’ he says.

‘It’s difficult to know if it’s fully healed or not yet. I’m still getting bits of pain so I’m not completely there. The idea is to see how much I can tolerate rowing and, if I can, build it up slowly.’

He’ll take every little victory as a positive indicator. In mid-January he was back on the water with the Irish men’s lightweight training group that includes his twin brother Fintan and the O’Donovan brothers, Gary and Paul – that was welcome progress after the frustration of seeing them ramp up training while Jake could only watch on.

‘It was hard because you just feel that everyone else is getting away from you,’ he says.

‘At least I’m moving forward now, and getting on the water is a lot more positive then when I couldn’t.

‘I’m taking it day by day because it’s very up and down.’

Jake hopes that he will be in the mix for the final trials for the Olympic-bound Irish men’s lightweight double. Those trials – after which the two men for the boat will be named – are scheduled for March so he knows time is against him. He’s not giving up hope although he concedes he has considerable ground to make up.

While his twin Fintan, and Gary and Paul O’Donovan are in top shape after the winter, Jake is a good few boat lengths behind in the race for those two seats.

‘One day I’d think I could be back. The next day I’m in a bit of pain again and asking myself how am I going to make it in time. It all depends on how I react to the training. If I kick on and the pain gets worse I could be set back for longer,’ he explains.

When Jake first noticed the pain in his lower back, around March last year, he was engrossed in the battle for those two seats in the Irish lightweight double for last summer’s Olympics that had yet to be postponed. It was in the days after a two-kilometre test on a rowing machine that he felt a pain down his leg.

‘I knew something wasn’t right because I never really had anything like it before,’ he says.

‘I tried to row through it for the first week because I didn’t know what it was and I thought it would go away. My usual injuries had never been long term.’

The pain didn’t go away. Then the country was plunged into the first lockdown. Jake and Fintan found themselves based back at home in Aughadown, just outside Skibbereen. He couldn’t get access to a physio and it wasn’t until he was sent for a MRI weeks later that the injury was diagnosed: he was suffering with a L5 S1 disc protrusion.

‘It’s a herniated disc in my lower back so it bulges out and presses onto the nerve, and it was causing pain down my leg too,’ he says.

‘It can be common in some rowers, just because of the repetitive nature of the sport. You use your back a lot. When you take the stroke it puts a good bit of force on it.

‘The injury is quite notorious for being a slow healer.

‘It’s hard to know what caused it, to be honest.’ 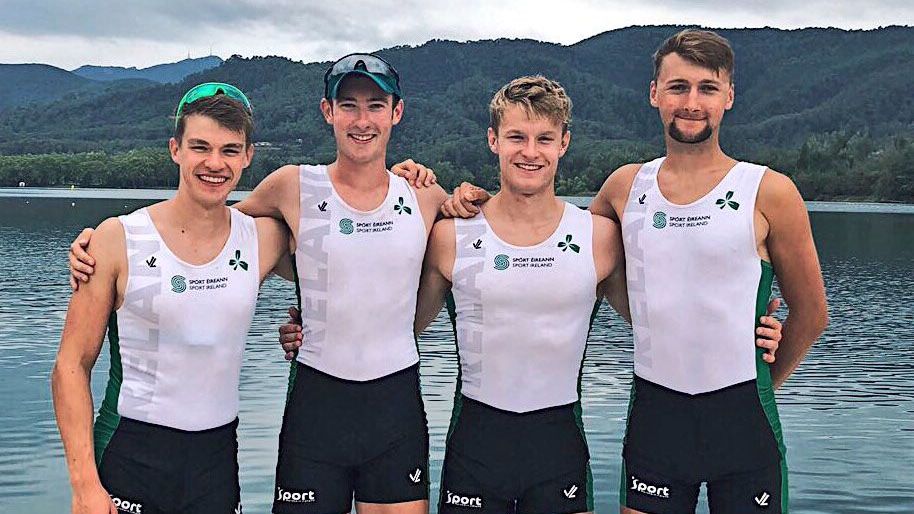 Jake McCarthy (third from left) and the Irish men's lightweight quad crew (which included his brother Fintan, left) that qualified for the A final at the 2018 Worlds.

As an elite athlete Jake is constantly active. As an international rower he trains more than most. But he had to slip from top gear down to walking pace, literally.

‘Initially you have to rest, but then when you’re active and moving around it keeps the nerve healthy so it helps with the pain,’ he explains.

‘Sitting down places a lot of pressure on the disc so that was even aggravating me initially. I wanted to keep doing what I could but it was aggravating it. I hate not training and I probably didn’t help myself. Soon after, even sitting down and getting up was hard. I spent a lot of time just lying down for most of the day. I was lucky we were in lockdown because I couldn’t do normal day activities. I tried to go for a few walks but the pain would kick in after 500 metres.

‘Staying active for me is a lot different then it would be for other people. Active could be just going for a short walk every couple of hours whereas I wanted to do a lot more to maintain my fitness.’

A silver lining for Jake was that the 2020 Olympics were postponed until the summer of 2021. If the Games had gone ahead last year he would have had no chance of being considered for the Irish men’s lightweight double. With the Olympics pushed back and him being unable to train, Jake needed a distraction.

‘I signed up for a CFA (Chartered Financial Analyst) exam, it’s a professional exam similar to accounting exams, but it’s for investing,’ explains Jake, who has a Bachelor’s Degree in Economics from UCC.

‘There are three levels to that – and my first exam is in August – and the qualification is that you’re a chartered financial analyst. It’s for investing professionals. I was interested in that from my degree in economics.

‘I thought it would be good to take my mind off the injury and focus on something else as well. You do need to give your head a break from thinking about the sport. Rowing won’t last forever either.’

More good news arrived last December when it was, unexpectedly, announced that lightweight rowing will be an event in the 2024 Olympics in Paris. The event had been expected to be culled from the Games. It means Jake and rest of Ireland’s lightweight training group will have another Olympic cycle to target. For Jake it’s a second chance to become an Olympian, given how the past ten months have panned out.

‘Initially I was quite stressed about the news because I had planed the next couple of years based on lightweight rowing being gone after Tokyo. I’ve had to scrap that plan now!’ he says.

‘It definitely has taken the pressure off. I had been thinking that Tokyo was my last chance and that was adding a good bit of pressure. Adding that on top of recovering from an injury isn’t a good combination.

‘In the back of mind I know I don’t have to rush myself back. I don’t want to train and be in pain. I want to get it sorted so I can go again.

‘I feel when I do get back that there won’t be anything stopping me because the hunger will be greater than ever.’

Jake is still in the mix for selection for the Tokyo Games but he knows the odds aren’t in his favour, given his injury, how much training he has missed, that the final trial is next month and that the other three men, all from the same parish, are all world champions and firing on all cylinders.

Victory right now is being back on the water, firing up his muscles and feeling that speed in the boat again, without suffering a setback. That’s progress. The hope is that the investment he puts in now will pay off in the future.