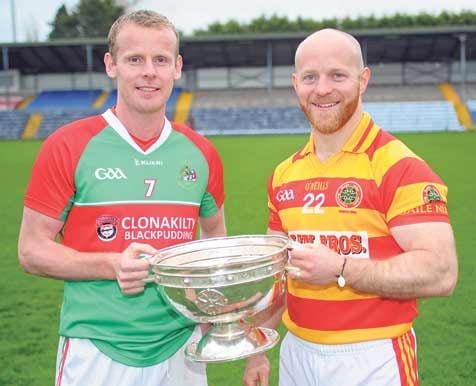 A FORMER Clonakilty player is plotting their downfall in the first round of this year’s county senior football championship.

The clash of Carbery clubs, Newcestown and Clonakilty, in Dunmanway this Sunday evening, May 3rd, at 7pm, is one of the ties of the round.

It’s expected to attract a large attendance in what should be an extra-special occasion for former Clon stalwart Martin O’Brien, who currently lines out in the colours of Newcestown.

‘I’m really looking forward to the game and will always be grateful to Clonakilty GAA Club during my time there,’ O’Brien told The Southern Star.

‘It was great coming down from Mallow to a footballing town like Clonakilty and representing a club with such a rich history. I’m looking forward to this first-round clash mostly because I’ll be facing guys I soldiered alongside and ultimately won a county title with.

‘Going up against the likes of Denis Murphy, Donal Lyons, Timmy Anglin and Tony Anglin will be special. That group of lads and I went to the well many times in the Clon colours.’

O’Brien admits one of the main motivations for transferring to Newcestown was for family reasons with daughter Molly starting school in the area, but he is delighted to have made the move.

‘I am lucky enough to have experienced the exact same buzz that I got playing with Clonakilty since transferring to Newcestown,’ O’Brien said.

‘The amazing thing about this particular club is the fact 13 or 14 line out in both codes – senior football and premier intermediate hurling. It is phenomenal what Newcestown achieves year after year, winning hurling titles as well as maintaining their senior football status.’

Meanwhile, Donal Lyons is a Clonakilty player O’Brien knows well and the experienced Brewery Town campaigner will be pivotal to his side’s chances of success.

‘It is all about winning the first round of the championship rather than focussing on the fact it is a local derby, to be honest,’ stated Lyons.

‘The threat of relegation has given some badly needed impetus to the first-round ties that were otherwise meaningless for a few years. If you can get over your first opponent then you can focus on a long summer and have time to prepare for the fourth round.’

The introduction of successful U21 and minor talent has strengthened Clonakilty’s senior panel and will be crucial to the Brewery Town’s chances of making an impact in this year’s championship.

‘We were fortunate to have the core of a county winning squad together for about nine or ten years before losing most of those individuals in over the past couple of seasons,’ admitted Lyons.

‘Our dressing room lost some big characters because of that. There is no doubt that some of these young fellas coming through the ranks are quality footballers having recently won a third Carbery U21 title in a row.’