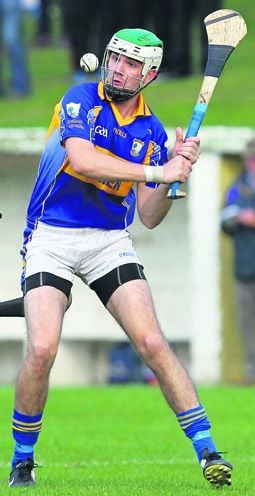 Eyes on the prize: Diarmuid Ó Mathúnas’ Patrick Crowley has been in top form en route to the West Cork semi-final.

Reigning champions Newcestown lost the first round to Dohenys, recovered in the second round against O’Donovan Rossa but departed the scene in the third round when beaten by St Plunkett’s.

Among the favourites for the title, Plunkett’s themselves then fell at the quarter-final stage to neighbours Clonakilty. Another fancied side, Ballinascarthy, were surprisingly beaten in the third round by Kilbree, who then fell to experienced Diarmuid Ó Mathúna in the quarter-final.

The championship is now down to Clonakilty, who have reached the final with an impressive semi-final win over St Colum’s, and Mathúnas and Dohenys, who play their semi-final this Sunday, August 30th in Ballinacarriga, at 6.30pm.

Mathúnas met Plunkett’s in the first round this season, way back in May, and looked to be heading for a surprisingly easy victory when they led by 0-11 to 0-2 at half time, courtesy of some fine free-taking by the ageless John Paul O’Callaghan.

However, the wheels came off a bit in the second half as Plunkett’s, minus the services of star duo Conor O’Driscoll and MP Keohane, staged a fine comeback. It finished 0-14 to 0-8, with question marks hanging over the real worth of this Mathúnas’ side.

The Castletown men then had to wait until two weeks ago for their next championship outing, against surprise packets Kilbree in the quarter-final.

This game showcased the talents of the maestro and the young prodigy as John Paul O’Callaghan again gave a masterclass in scoring 2-6, 0-4 from placed balls, while young Kevin O’Donovan, captain of the winning Carbery minor team last season, was outstanding at corner forward. Mathúnas were clearly the better side on the day, registering a 2-14 to 0-8 victory to qualify for the semi-final.

For this semi-final, Mathúnas will again look to O’Callaghan and O’Donovan to get the scores on the board, with Ted Lordan and Tim Crowley forming a very effective midfield pairing. At the back, centre back Patrick Crowley has been in sparkling form, well assisted by experienced goalkeeper Johnny Nyhan, young Gearóid O’Donovan and Sean Crowley.

When Dohenys met Newcestown in the first round, they were looking for revenge for the previous year’s defeat by the St John’s men and they duly got it on a score of 0-12 to 1-7. Noel Collins at corner back was their star performer that day and young sub Mark Buckley played a vital role with three points.

The Dunmanway side then faced Bandon in a third round encounter and it took a very late goal from ace centre back Jerry McCarthy to salvage a draw, 1-11 each. The replay saw both sides fielding under-strength sides and goals by Patrick McCarthy and Stephen Collins, who came on as a sub having returned from Scotland for the game, gave Dohenys victory on a score of 2-10 to 0-7.

Dohenys have found it difficult to field a settled 15 this season, although they have a fine league record, because of injuries and emigration.

Alan Sheehan, gone to Australia, is a huge loss to the side. Veteran Noel Collins, goalkeeper Vincent Healy, Tom Collins and Jerry McCarthy, if he doesn’t line out at midfield, will backbone the defence, while Eoin Lavers has the ability to dominate midfield. Much will depend on the talented McCarthy.

In attack, a fit Mark Buckley should make a big contribution, with Jamie Carroll, Patrick McCarthy and Stephen Collins are all capable of taking scores.

Prediction: There has been little between these two sides for the past six years with both made up of a mixture of good veterans and budding young talent.

Dohenys’ preoccupation with football in recent weeks won’t help their cause while Mathúnas have been on a hurling roll in junior A, junior B and U21. A draw wouldn’t surprise us but a tentative vote goes to Mathúnas to advance to a final meeting with Clonakilty.