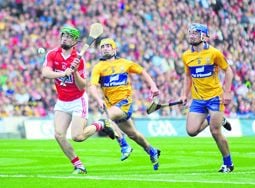 Once again on Saturday last we saw the two sides of this Cork team, the Jekyll and the Hyde. We thought all our birthdays had come in one go as we watched them dismantling Wexford in a first-half display that was full of determination, classy hurling, magnificent scores, total focus and superb stick work.

This was Cork at their sublime best, albeit against a Wexford side totally short in confidence and skill, who stood off Cork and allowed them to hurl. Even the dogs in the street know that if you stand off these Cork players, especially the forwards, they can destroy you with their skills.

Wexford played into Cork’s hands first by deciding to play against the strong wind although winning the toss, and then withdrawing one of their attackers to play in defence. This meant Cork had a loose player in defence and Mark Ellis filled the role to perfection. He sat in front of the dangerous Wexford full-forward line, on the 20-metre line, and cleared a world of ball, as well as bursting forward in possession.

As well, Brian Lawton, named as wing forward, lined out at midfield and spent much of the time supporting the Cork half-back line. The other wing forward, Bill Cooper, also did a lot of defending. This meant the Cork defence, which had been conceding huge scores all season, was much tighter and well on top.

Vital, too, was the strength of the wind as Nash’s long puckouts were dropping right into the full-forward line, resulting in the two Cork goals and a few points. Bypassing the half-forward line, which struggles to win primary possession in most games, was vital for Cork in that first half.

It was also noticeable that Pat Horgan was drifting out from the Wexford goal, doing well, and leaving Conor Lehane and Seamus Harnedy inside nearer to goal. This worked a treat, too, with Lehane, at last, displaying the huge talent we all know he possesses but doesn’t always show. Some of his point-taking was sublime, one in particular from the sideline.

Lehane has undergone innovative eye laser surgery recently and this is bound to have a beneficial effect on his game. He looked a different player on Saturday.

After the best half hour of hurling we have seen from Cork in many a long day, they had an amazing 2-17 on the board and led by 14 points. In truth the game was over as a contest at that stage, against a very limited-looking Wexford side.

So, what happened in the second half? Where did Mr Hyde come from?

True, it was probably not easy for the players to motivate themselves to keep up the fierce pace and pressure when they were so far ahead but motivation has been Cork’s problem far too often this season.

When Kilkenny were hammering Wexford in the Leinster semi-final, they had no trouble in keeping it going for the full hour. Likewise, Tipperary against Limerick, but Cork never possessed this killer instinct and hammering teams is not in their nature.

Cork fell back into all their old failings as Wexford upped their game in the second half and the Slaney men must have been regretting their first-half slumber as they cut the lead to six points. Luckily, they never looked like scoring the goals that would really have put Cork in serious trouble.

In that second half, Nash’s puckouts began to land on the half-forward line and again Cork couldn’t win them. The backs, under pressure, began to lamp long, aimless balls into attack, where the extra Wexford defenders gobbled them up.

The Cork forwards, so sharp in the first half, couldn’t win an argument in the second half and just stopped fighting for possession.

Luckily, the backs remained tight in front of goal but Wexford hit eight unanswered points in a row and Cork went 20 minutes without raising a flag before Lehane’s two pints stifled the Wexford comeback.

Wexford didn’t help their cause with some bad wides in the closing stages. We dreaded to think what Kilkenny or goal-hungry Tipperary would have done to this Cork team in the second half.

Time was when it was the Cork footballers who produced these Jekyll and Hyde performances but now it is the inconsistent hurlers. Granted, winning any game in Wexford Park isn’t easy, as Clare discovered last season, and Cork deserve great credit for emerging convincing winners, but it was the performance itself that again had Cork supporters worried.

Cork have now been drawn against Clare in the qualifiers, the Banner men getting back on track against hapless Offaly last Sunday. There were signs in this game that Clare are regaining their cutting edge and the return of Colm Galvin from America is a huge plus.

Shane O’Donnell is in rampant form up front and with Darach Honan will create big problems for the Cork full-back line. Add in Kelly, McGrath, Conlon, the Ryans and Golden and an improving Clare have serious scoring potential.

The Cork we saw in the first half against Wexford stand a good chance of beating Clare, the Cork we watched in the second half will be blitzed out of it.

Which Cork will we see this weekend, Jekyll or Hyde?