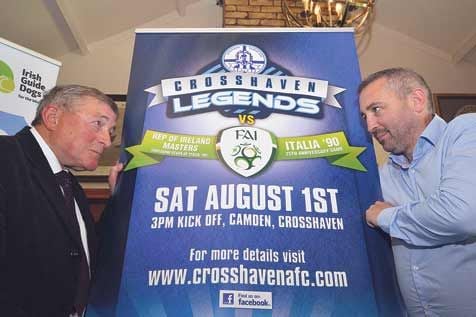 ITALIA ’90 heroes Packie Bonner, Ronnie Whelan and Ray Houghton will be part of the Republic of Ireland Legends team taking part in a charity challenge match against a select Crosshaven XI this bank holiday Saturday, August 1st at Camden in Crosshaven.

The Crosshaven team will be managed by Chelsea FC legend and Crosshaven resident Bobby Tambling, who has chosen a strong team ahead of the charity match, selected from numerous local players including former Cork City players Jim Mulcahy and Greg O’Halloran.

Details of the event were announced at a reception held in the RCYC recently, where club chairman Seamus Murphy outlined the logistics of the event which is expected to attract upwards of 2,500 spectators to the match at Camden with funds being generated for the Irish Guide Dogs for the Blind and the Irish Cancer Society’s Action Prostate Cancer campaign.

Funds are also going towards the club to redevelop part of the grounds, especially the all-weather playing area in order to cope with the enormous growth in numbers playing football at the club.

Tickets are available on www.crosshavenafc.com, priced reasonably at €10 per adult, €5 for U16s and U5s free with the kick-off planned for 3pm.