Player of the year: Bandon's Conor Hourihane has enjoyed a terrific first season in League One with Barnsley. 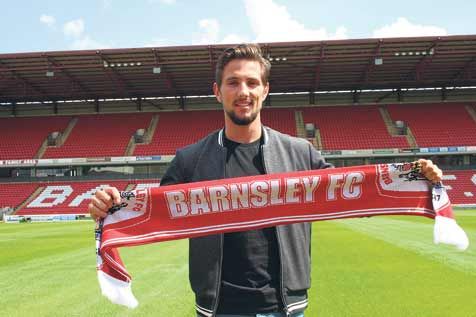 Player of the year: Bandon’s Conor Hourihane has enjoyed a terrific first season in League One with Barnsley.

BANDON’S Conor Hourihane finished his first season with Barnsley in style by scoring one goal and setting up three more in their 5 – 0 League One thrashing of Rochdale at Oakwell on Sunday.

It was the perfect end to a terrific debut season with Barnsley for the West Cork man, who was also named the club’s Fans’ Player of the Year. He also finished the season as Barnsley’s top goalscorer, with 14 in total, 13 coming in the league and the other in the FA Cup.

Not only that, but the classy midfielder also had the most assists this season of any Barnsley player, with an impressive 15 assists in all competitions. He also played the most for the club this season, with a total of 53 appearances (46 in the league, seven in cup competitions). Barnsley finished the season in 11th place in the League One table, seven points off the promotion places.

Speaking after Hourihane’s latest man-of-the-match performance against Rochdale, Barnsley manager Lee Johnson commented: ‘He is just so effective isn’t he, got player of the year and rightly so because of the influence he has had.’

Former Plymouth Argyle captain Hourihane joined Barnsley last June on a three-year contract. The 24 year old was also named the Sky Bet League One Player of the Month for August after an impressive goal-scoring start for Barnsley.