It’s been another incredible year for the talented sportspeople of West Cork on the local, national and world stages, and, after much head-scratching, sports editor KIERAN McCARTHY looks at ten magical moments that captured the imagination in 2019.

Sit back, relax and relive these feats that show, again, why West Cork is number one for sport.

BEST IN THE WORLD

This was the year that the O’Donovan brothers were split up – for how long, we don’t yet know – but the good news for Irish rowing is that the Irish lightweight double still proved itself to be the best in the world. Another Skibbereen Rowing Club oarsman, Fintan McCarthy, a rising star, won his seat in the double alongside Paul O’Donovan. Together, this new pairing clicked – and they stormed to a sensational gold at the 2019 World Rowing Championships in Linz, Austria.

The all-Skibb act won their heat, quarter-final and semi-final, but they looked in trouble in the A final, as they were sixth after 500 metres. Oh we of little faith, we should have known better. The Irish double didn’t panic. Instead, they pulled themselves into contention and powered into the gold position and stayed there. An incredible performance that earned them gold – Fintan’s first senior world title and Paul’s fourth.

And, having qualified for the A final, they also booked the Irish double’s place at next year’s Olympic Games in Tokyo. Now the battle for those two seats is well and truly on.

Losing one final is hard to take. Losing two on the bounce is a sickener. But imagine losing three consecutive county finals? That surely leaves psychological scars. 2019 Dohenys captain Martina Collins admits she broke down crying at work after losing the 2018 county junior B football championship final.

But Dohenys ladies showed immense mental strength to come back in 2019 and battle their way to a fourth successive county junior B decider. They faced Midleton in October, on a wet and miserable day in Kilmichael, but this was the day when the bridesmaids of recent seasons took centre stage and all eyes were on them.

It proved to be fourth time lucky as Dohenys, thanks to a late winning point from minor Mairead Crowley, beat Midleton by 0-9 to 0-8. Ruth Collins, Aileen Murphy, Melissa Duggan, these are some of the heroes, as Tony White’s team showed that good things do come to those wait. As a reward, Dohenys have the county title they craved and now also look forward to junior A football in 2020.

Where do we start with this one? It’s early August in Portlaoise. It’s Cork v Dublin in the All-Ireland U20 football final. Twelve minutes in, the Dubs led 1-6 to 0-0. Uh oh. Cork looked in trouble. But then it all changed.

As O’Driscoll told the celebrating Cork fans after the cup presentation, ‘We’re back, baby!’ 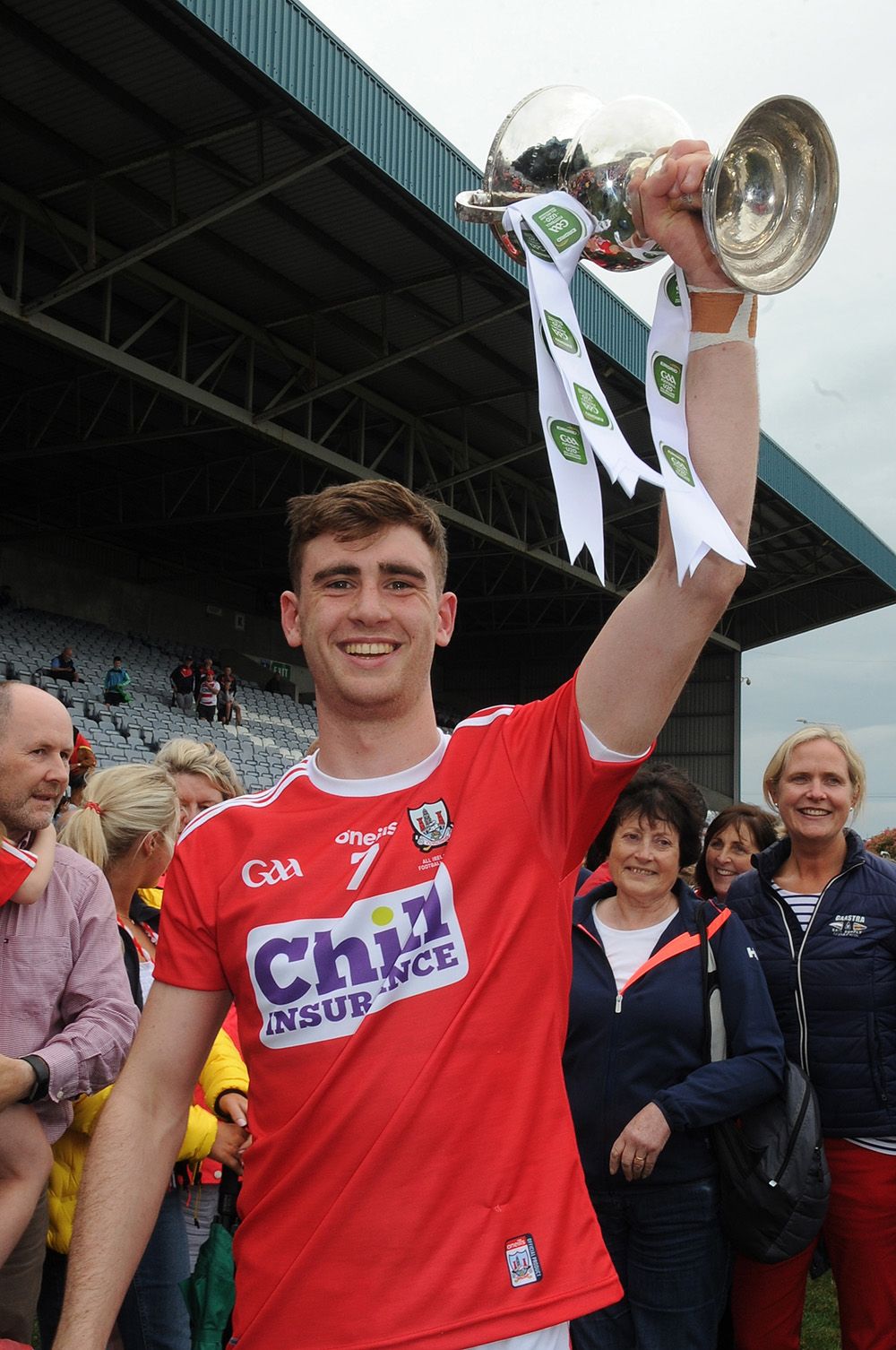 There’s a very good reason why Phil Healy’s coach, Wexford man Shane McCormack, referred to the Ballineen bullet as a ‘warrior’ after her 2019 season finished up at the World Athletics Championships in Doha in late September. It’s because Ireland’s fastest woman battled back from a broken foot, injured in April, that threatened to rip up her entire season.

Incredibly, 12 weeks after she broke her fifth metatarsal while walking through the cobbled streets of Valetta in Malta after one of her best-ever training sessions, Healy lined up in a 200m heat at the World University Championships in Naples. In reality, she shouldn’t have been competing (she had only started back running six weeks earlier), but she did, won that heat and went all the way to the final where she finished sixth. A fully-fit and firing Healy would have been in line to win a medal.

Still, to even race at those championships highlighted her steel and determination. Warrior.

We’ve all known for some time that Darragh McElhinney is a little bit special and the Glengarriff teenager showed in 2019, again, just why he is so highly rated. He flew out to the U20 European Championships in Sweden as a genuine medal prospect in the 5000m, having topped the European U20 rankings in both the 3000m and 5000m.

Still, championship racing is different and there was no guarantee that he could translate his impressive form into an actual hard medal. He held high expectations himself – and that’s why he was initially disappointed when he finished third to win a European bronze medal.

‘It is a bit of an anti-climax,’ he sighed afterwards, but as the days went by, Darragh realised what he had achieved is quite special. He had become only the third Irishman ever to win a 5000m medal at these championships. That’s a unique club that includes John Treacy’s silver medal in 1975 and Mark Carroll’s gold in 1991. Lofty company for the then 18-year-old West Cork athlete. And we all know that there’s more to come. 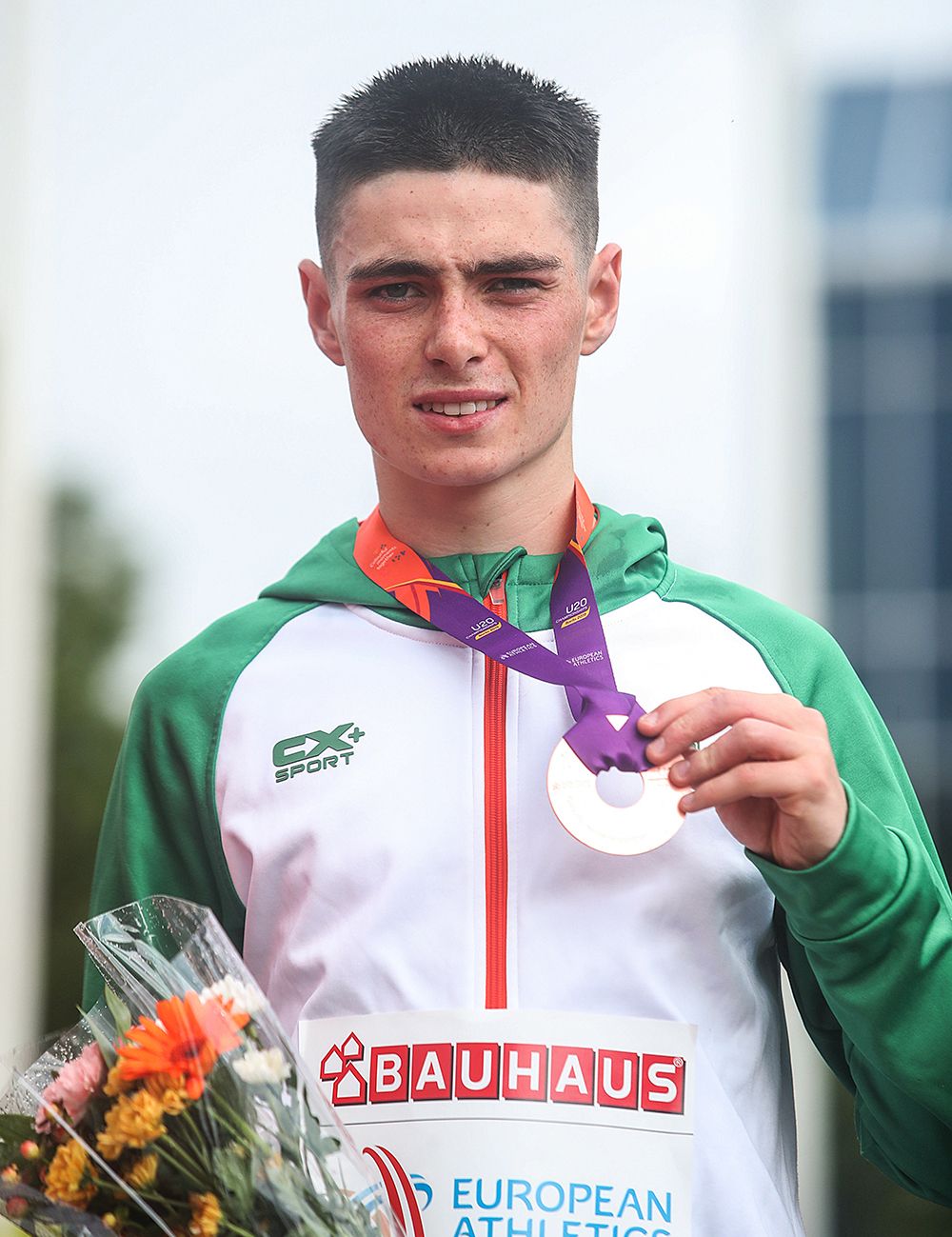 Never before in their 127-year history have St James’ GAA Club enjoyed a season like this. Ranked as one of the outsiders before a ball was kicked in the Carbery JAFC, they built up a head of steam, beating Plunkett’s twice, then Tadhg MaCarthaigh and Argideen Rangers before defeating Ballinascarthy by 0-11 to 0-9 in the division’s showpiece football game to clinch the club’s first-ever Carbery JAFC crown.

Incredible scenes, as this club that couldn’t field U16, minor or U21 teams in 2019 battled their way to the biggest prize in Carbery football. It’s the stuff of dreams, pure magic. Into the county series then and the St James’ juggernaut continued as they reached the county final, and while they had to give way to Kilshannig in Páirc Uí Rinn in November, this is the season that the Mountain men will never, ever forget. Heroes and legends were born.

It’s been another incredible year for Bandon soccer hero Conor Hourihane. He became West Cork’s first Premier League footballer and scored his first Premier League goal – for Aston Villa against Norwich in October – but our standout moment was when Hourihane rattled the back of the net with his first goal for the Republic of Ireland in March. It turned out to be the winner in a 1-0 victory against Georgia at the Aviva Stadium in a Euro 2020 qualifier.

The game was 36 minutes old when Hourihane stood over a free kick, and with his magical left foot, he bent the ball around the wall and high into the goal. Ireland boss Mick McCarthy hailed the strike as ‘something special.’ And it was. Not even a shower of tennis balls that rained down on the Aviva pitch, from Ireland fans in protest against John Delaney, rattled the ice-cool Hourihane, as he waved his magic wand and conjured up a stunning strike.

ON TOP OF THE WORLD

We do like our world champions here in West Cork, and West Cork Kickboxing Club is a consistent source of international titles.

Bantry kickboxer Tony Stephenson is no stranger to World and European titles, but what is remarkable about his success at the senior WAKO World Kickboxing Championships in October is that there was a ten-year gap between this win and his first, as a teenager in 2009. He doesn’t hide that this latest triumph means the most to him.

Out in Sarajevo and up against fighters younger than him, the 28-year-old – under the guidance of coach Ian Kingston – fought his way past four opponents and earned his spot in the -69kg final before beating Italian Mattia Amatuzio to win the big prize.

‘I was 18 when I won in 2009 but this win means more – and it was a lot harder,’ Stephenson remarked, as he returned to the top of the pile as the best in the world.

West Cork’s growing reputation as a hotbed of rugby talent was enhanced even more in the past 12 months at all levels – club, provincial and international – with a Rosscarbery man and a Kealkill man at the forefront of this surge.

Former Carbery Rangers’ footballer John Hodnett from Ross and Josh Wycherley (younger brother of Munster man Fineen) from further west were both powerhouses on the Ireland U20 team that won the U20 Six Nations Grand Slam in style earlier in the year.

Wycherley was man-of-the-match and scored two tries in the 31-29 victory against France that clinched the championship, and they went on the following week to beat Wales and complete the Grand Slam.

‘Absolutely unbelievable,’ is how prop Wycherley described their success, and with himself and powerful number eight Hodnett two of the real stars, the Ireland U20 success was celebrated in West Cork too, another sign of the rise of rugby locally.

In the end it was a short goodbye, but that’s just what Coppeen jockey Noel Fehily wanted. At the Cheltenham Festival in March, after riding 50-1 Eglantine Du Seuil to victory, he announced he was going to retire. Nine days later, he rode 1-3 hot favourite Get In The Queue to victory at Newbury – and it was all over. The end of a glorious era, but what’s important is that it was on Fehily’s terms.

‘To be able to do it the way I wanted to do it was special,’ Fehily told us afterwards, and what’s also special is his stunning career that rightly sees him hailed and remembered as one of the greats.

He rode 1,350 winners over jumps in Ireland and Britain since 1998. There were the major wins in the Champion Hurdle at Cheltenham – with Rock On Ruby in 2012 and with Buveur d’Air in 2017. There was success in the Champion Chase on Special Tiara in 2017 and impressive back-to-back wins in the King George VI Chase on Silviniaco Conti in 2013 and 2014. What a career. What a legend. And he bowed out on his own terms.