THEY’RE seen as the outsiders, but Courcey Rovers are primed to spring a shock in Sunday’s Co-op Superstores Senior A Hurling Championship final at Cork GAA HQ (4pm).

Manager Sean Guiheen is well used to winning county titles as a player with Na Piarsiagh and is bringing that winning mentality to a Courceys team that are up against title favourites, Fr O’Neills.

‘From day one, Fr O’Neills have been the raging-hot favourites to win the competition. They’ve been knocking on the door in the last few years and have been very close,’ Guiheen told this week’s Star Sport Podcast.

‘They narrowly lost to Charleville a few years ago, and when you look at Charleville’s results this year, they drew with the Barrs, they led for the majority of the time against Blackrock and those two sides are in the (premier senior) county final.

‘Likewise with Kanturk, they were very close coming down the home straight last year, but Kanturk pipped them. They knocked out Midleton this year.’
Courceys and O’Neills did meet already in the group stage with the Imokilly side coming out on top, 2-20 to 0-19. Na Piarsiagh man Guiheen was happy with his players’ display, however.

‘Against Fr O’Neills, we were competitive, conceded a goal late in the game but we found we could compete and it gave us hope,’ he said.

‘Finals are there to be won. We just want to get our performance right on Sunday and perform to our very maximum. If it’s good enough to win, it would be fantastic. If we lose, we’re expected to lose.

‘You’re in there, you want to win. We’re up against it, we know that. When you look on paper at what they have, Deccie Dalton I think by all accounts is back on the Cork senior hurling panel. Billy Dunne is lighting up the lights this year … then you have Ger Millerick.’ 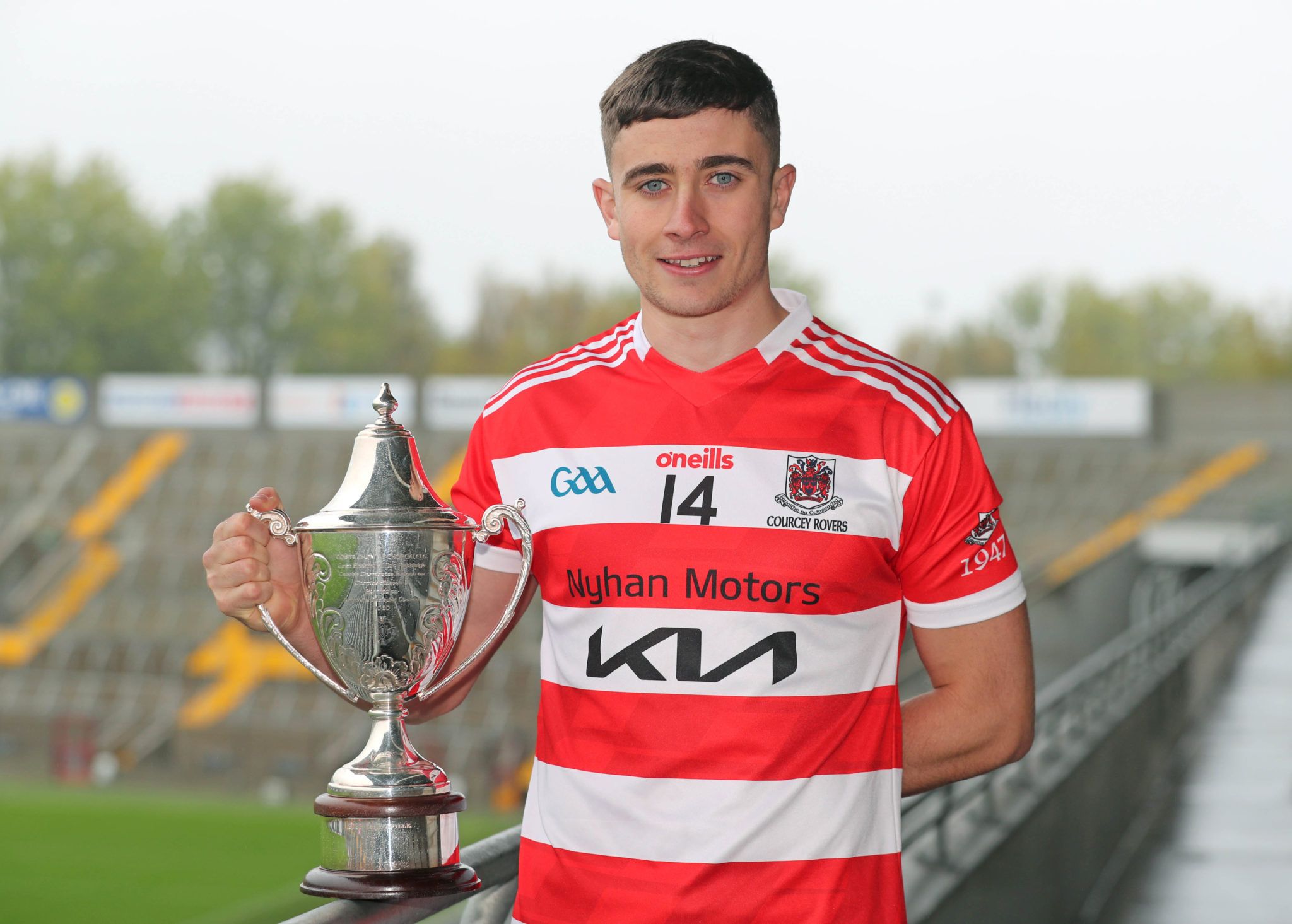 Tadhg O'Sullivan, Courcey Rovers, will be hoping to get his hands on this cup this weekend.

While the favourites do have past final experiences, the underdogs are well set when it comes to county final day too. They beat Castlelyons in the 2021 county Premier IHC final, 1-19 to 1-18. The big day won’t faze Courceys.

‘They’re in great form, to be fair, very relaxed. It’s handy that we were in a final last year, similar situation as this year. They’re familiar with the dressing room, the field, winning the county last year. It’s nothing new to them and they’re really looking forward to it,’ he said.

At the start of the year, Guiheen’s troops were tasked with arguably the ‘group of death’ in alongside O’Neills, Blarney and Killeagh.

‘When the draw was made, it was an extremely tough group we got. Don’t get me wrong, every game at that level is hard and tough because they’re all 50/50 games but when you go up, you would have hoped to get something easier than the three teams we got,’ the manager explained.

‘Even Killeagh are a very traditional hurling club, they beat a lot of senior teams in the league. Midleton, Na Piarsiagh, Bishopstown, and they kept their status.

‘By winning that first game, it certainly brought us on with belief and a lot more hope going into the next two games.

They then disposed of Ballyhea (0-17 to 0-16) and Fermoy (5-14 to 0-14) in the knockout rounds. In the latter game, Sean Twomey provided a goal-scoring master class with four net-rippers.

‘He’s a fabulous player, he’s a big player for us. A very honest guy, great guy. I think he has shown this year what he can bring to the table. You can see he’s a Cork player. He can win his own ball, high or low. He’s always a threat but he also works, chases and harasses defenders,’ Guiheen explained

There is an argument to be made about Twomey starting for Pat Ryan’s Rebels next year, provided he continues his electric form.

‘With Sean, he’s been on the Cork panel in the last few years. He’s 22 now. He’s done his time, three years. It’s time to give him an opportunity,’ Courceys boss said. ‘He certainly is someone Cork might need, he’s the type of guy who can win hard ball, high ball, low ball. He’s very physical.’

Even if they lose on Sunday, the Ballinspittle community can be very proud of their hurlers’ efforts to date.

‘The journey we’ve been on is incredible. We’ve got a great response from the players. Every game they’ve played, they’ve been superb for us,’ Guiheen said.

‘For the supporters even to come down on the field after the semi-final shows their happiness. These days don’t come every year and that’s my point to the players and supporters. You have to make the most of them.’