Conor Hourihane (left) and Fineen Wycherley both played GAA before they pursued their other sporting loves.

Kieran McCarthy picks a team made up of local sportspeople who started off in the GAA before answering their calling in other sports. With Conor Hourihane pulling the strings at centre forward, Barry O’Driscoll buzzing around the goal and Enya Breen commanding the half-back line, this team will take some stopping

1. RYAN PRICE – Okay, maybe we are cheating a bit here because the Skibbereen man is still between the posts for O’Donovan Rossa but we have to make sure our goalkeeper is reliable. Up until he turned 20, soccer was Price’s number one sport and he still lines out for Skibbereen AFC when he’s needed. Go back further and he played with Cork City FC’s U18s and U20s and he also had a short stint on the bench for City’s first team in 2010. Add in a couple of seasons with UCC in the Munster Senior League, then it highlights the former Cork football shot-stopper’s soccer pedigree, and that qualifies him for this team.

2. RONAN HURLEY – These times the Schull man lines out at left back for Cork City FC, but rewind a few years and Ronan was filling various positions for Gabriel Rangers. Though for his club he was mainly centre back or full back, Ronan was used as a corner back when he was involved with Cork underage football squads at U15 and U16 levels. He was full back when Gabriels won the Rebel Óg county minor B1 football championship in 2017.

3. FINEEN WYCHERLEY– The giant Munster man might be better known for his scuffle with Johnny Sexton in a PRO14 game in December 2018, but in his GAA days with St Colum’s the Kealkill native manned the full back position. His height and strength were already evident back then. That Colum’s team captured U14 and U16 West Cork and county C titles. He wasn’t the most skilful footballer but he has the physical presence to anchor this full-back line. We’d fancy him under the high ball.

4. LAURA SHEEHAN – The current Munster and Ireland rugby winger lined out with the Beara ladies’ football team in the past, usually as a corner back or wing back. A speed merchant, Laura won’t get caught out of position, her forward won’t get away from here and, crucially, she also enjoys the art of defending – she wants to be a back. She said: ‘I just liked stopping people and getting the ball to our forwards as quick as I could.’

5. PAUL O’DONOVAN – Details of the O’Donovan brothers’ underage football careers with Ilen Rovers remain sketchy. We know they did line out with Ilen before they got the rowing bug and we’ve also heard they liked to get stuck in – but that’s about it. Given the level they’re reached now, we know they’re hard workers, disciplined, tenacious and blessed with incredible engines, so we’re slotting them in the half-back line.

6. ENYA BREEN– Ladies’ football loss was rugby’s gain, as the former O’Donovan Rossa player is now regarded as one of the brightest talents in Irish women’s rugby. The senior Irish international caught the eye at centre back when the Skibb team drew the 2018 county junior C football final. She’s strong, aggressive and powerful, and she has the ability to power forward. Breen would also keep the O’Donovan brothers on either side of her in check.

7. GARY O’DONOVAN– The same applies to Gary as we wrote for Paul. They'd leave everything on the pitch, and while we have reservations about them under the high ball, we’re willing to give them a chance, until half-time at least.

8. DARREN SWEETNAM – Granted, the former Doheny (pictured below) was more of a hurling man and played in the 2012 All-Ireland SHC semi-final for Cork at Croke Park, but given the Munster rugby star’s sporting versatility, he’d find his feet fast in this midfield. He has the ability, skill and tactical knowledge to drive this team on from the centre of the park. 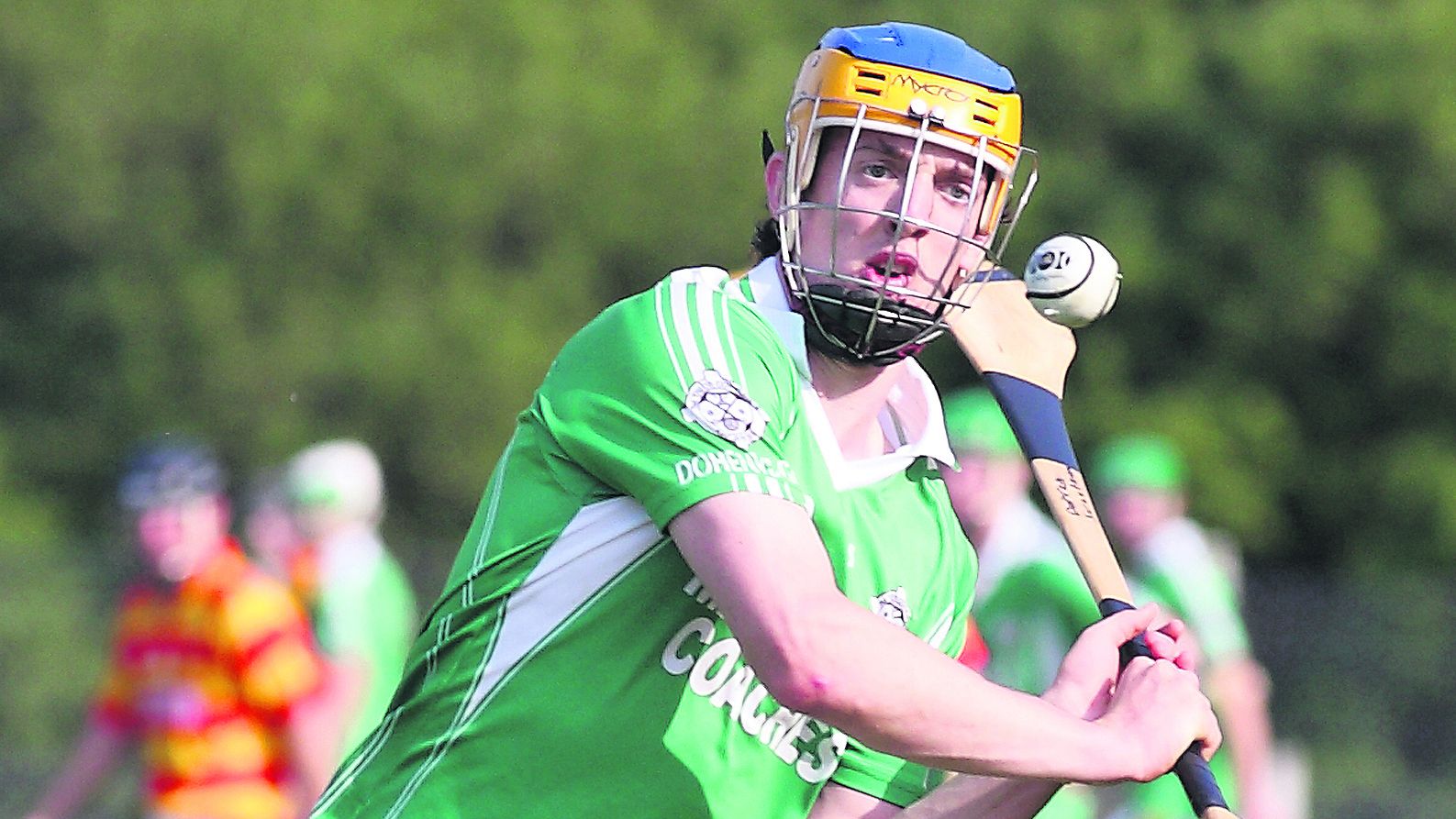 Darren Sweetnam in action for Dohenys' hurlers in the Carbery JAHC before he switched his attention to rugby.

9. ALAN SHEEHAN – It’s an all Dunmanway midfield as Doheny man Sheehan is picked to partner Sweetnam. Sheehan was playing GAA up to recently, before signing on with a soccer club – Casey Comets, a State One team – in Melbourne where he is living now. It’s worth noting too that Sheehan was on the books of Cork City before. GAA wise, if Sheehan was home in Dunmanway he’d start for the Dohenys. Last season he was home for his wedding and lined out in the Cork SFC win against Kiskeam.

10. DARRAGH McELHINNEY – Rated as one of the top young athletes in the country now, the Glengarriff teenager (19) was also considered a real football talent. He was involved with Cork development squads but decided in 2015 to concentrate on athletics, bowing out after helping Beara win the U16 county Premier 1 football championship final. A versatile player, Darragh slots in at wing forward here, using his pace and engine to get up and down the wing.

11. CONOR HOURIHANE – Before he followed his football dream across channel, the Bandon man lit up GAA pitches here at home. Brian Hurley tells the tale of Hourihane scoring 2-5 for the Cork post-primary schools’ football team at half-time in a Munster final in Killarney. Legend has it too that in the early noughties, at the West Cork Sciath na Scol finals, baby-faced Hourihane set the place alight, scoring 'six or seven goals' in one game. Brian Hurley says: ‘Conor was a step ahead in everything, his runs, his anticipation, he was always a move ahead of everyone else.’ Given his creativity and ability to spot a pass, we're backing him to make this attack tick.

12. CHARLIE LYONS – The Valley Rovers club man is now a defender with Cobh Ramblers but it’s no surprise to learn that Lyons shone in his GAA days, both in football and hurling. He was involved in the Cork football development squads. A defender now, playing GAA he impressed in midfield and attack.

13. BARRY O’DRISCOLL – The most prolific striker in the West Cork League in recent seasons, it’s no surprise that the Drinagh Rangers ace played in attack for Clann na nGael, either wing forward or corner forward. He stopped playing GAA when he was 15 years old, and we think he’s a good bet for a goal or two.

14. JOHN HODNETT – Another of the current Munster rugby brigade from West Cork, the Ross man lined out with Carbery Rangers all the way up to minor and he lists full forward as his preferred position. Strong and powerful, he'll take some stopping close to goal, and we've surrounded him with two corners forwards who have speed and can finish.

15. DENZIL FERNANDES – The Shelbourne FC wing wizard caught the eye in his underage football days with Clann na nGael. Corner forward suited him, allowing him a freer role to roam the pitch and make an impact. We’d fancy him to turn a few defenders inside out and he’s a player who wants to get on the ball. Notable mention too for former Cork City and Limerick FC striker Conor Ellis who was a stand-out footballer for St Colum’s underage teams and a former team-mate of Fineen Wycherley.

MANAGER: JOHN CAULFIELD – Who else but the Enniskeane man? He is a Cork City legend, but his place in the annals of St Mary’s GAA is also secure. Caulfield played with the club up to 2007 and was part of the management team when they won the club’s first-ever Carbery JAFC title in 2009. He’s the right man to manage this team.