FORMER jockey Stephen O’Donovan hung up his football boots and got back in the saddle just days after raising the West Cork League’s Beamish Cup trophy aloft at Turner’s Cross last September.

O’Donovan has been one of the West Cork League’s most consistent and versatile players over the past decade. In that timeframe, his Mohona-based club won three Premier Division titles and finished runners-up on three other occasions. A Beamish Cup was won in 2015 before Dunmanway reached the 2020 cup decider at Turner’s Cross.

Town edged Clonakilty Soccer Club 2-0 courtesy of a superb Cathal Daly brace. Unsurprisingly, the winners’ success was celebrated wildly over the following days – but the team captain had little time to bask in the glow of winning the West Cork League’s most prestigious knockout trophy.

A new life beckoned across the water, or rather, a return to a former life: riding horses.

‘As a former jockey, I am back working for Noel Williams, a famous Scottish racehorse trainer specialising mainly in National Hunt racing, and am based near Reading in England,’ O’Donovan said.

‘Noel is an unbelievably nice person to work for and I am back riding horses which is something I have always loved. I’d have previously worked with him back in 2009. Noel would have been Alan King’s assistant at that time.

‘The original plan was for my partner Tara and I to go to Australia last June but as with everyone else, the Covid-19 outbreak meant we had to reassess everything.

‘Thankfully, I had been speaking to Noel on and off after he had started up training horses. Noel always told me to let him know if I ever had plans to get back involved in the horse industry. So, once the move to Australia wasn’t likely to happen anytime soon, I got in contact with Noel and straight away, he said no problem. Everything just fell into place for us from there.

‘Tara was looking to complete her Masters in School Teaching and found a college close to Reading. Her placement isn’t far from Noel’s stables, so we moved over and everything is going great for us now, thank God.’

Life has changed considerably since O’Donovan stopped lining out for Dunmanway Town in the West Cork League. Nowadays, he is at work at 6am each morning in Noel Williams’ stable yard. There are stables to be mucked out before riding out three or four different horses.

He finishes around lunchtime and returns later in the afternoon. It’s late in the evening before O’Donovan’s working day ends.

A demanding schedule, yes, even though O’Donovan has every second weekend off, as Noel Williams has regular runners almost every week.

Stephen O’Donovan wouldn’t have it any other way. Working for Noel Williams has rekindled memories of growing up with horses and moving to England as a conditional apprentice jockey 11 years ago. 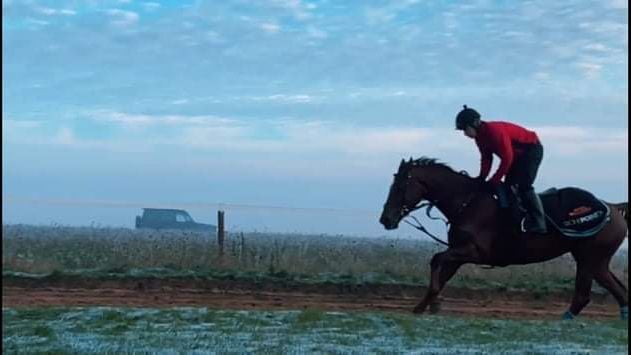 Stephen O'Donovan is now based near Reading in England as a work rider for trainer Noel Williams.

‘Noel has a couple of nice horses that could yet end up running at the Cheltenham festival, you wouldn’t know, if everything goes right,’ O’Donovan said.

‘When I first came over as a jockey in 2009, I made a real go of it. Things were going really well for me back then. I had nine winners ridden during my first proper season between October and November of that year.

‘I remember the last heading in the Racing Post about me was “promising conditional (apprentice) O’Donovan breaks wrist”. I just couldn’t get going after that and ran about seven or eight winners in the next two years.

‘It was costing me to go racing at that stage so that’s when I decided to come home.

‘Now, things are working out for Tara and I over here in England and we are happy. I know now that I am not going back horse riding even though it is something I grew up with as my Dad always had horses. I turned apprentice when I was 15, turned amateur, then professional, and back amateur again when I came back to Ireland.

‘I had 19 winners ridden in England so couldn’t turn back amateur there. So that’s why I went home. I grew up with horses and knew nothing else only horses. It is a profession I am very comfortable with and it’s in my blood. I love my job, so life is good.’

The days immediately after his final appearance in a Dunmanway Town jersey are precious to Stephen O’Donovan, albeit a little hazy due to the celebrations involved.

Saying goodbye is never easy and even harder when you are leaving behind the friends you grew up with. Representing his hometown club one last time, in a cup final at a League of Ireland ground, was a fitting farewell.

‘As much as I enjoyed all the celebrating afterwards, I was thinking these are the lads I grew up with, played GAA and soccer with and now I am leaving them,’ O’Donovan commented.

‘I remember having a conversation with Mark Buckley at the end of the previous season just after we won the West Cork League Premier Division. At the time, we still had plans to head off to Australia, but I remember telling Mark how much I would love to win another Beamish Cup if it was at all possible.

‘The Monday night (after the Beamish Cup final) was goodbye as Tara and I were leaving for England on the Tuesday. The rest were heading back to work with sick heads!

‘I am not going to lie; things did get a bit emotional at the end of the night alright. Just saying goodbye was hard. I remember being on The Southern Star podcast with Kieran McCarthy before driving to Rosslare and listening back to it on the journey.

‘Even on that drive, I was thinking, Jesus, the West Cork League will be starting again soon. Now that we are over here and settled, I am happy but for the first few weeks, I was thinking could I knock another few months out of the soccer!’