BY JACKIE KEOGH EIBHLN O'Sullivan has, for the second time, been appointed chairperson of the Federation of Irish Fishermen (FIF). 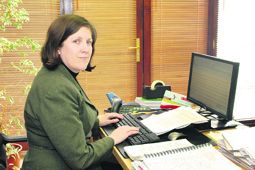 Eibhlín O Sullivan is back in the chair at the FIF.

EIBHLÍN O’Sullivan has, for the second time, been appointed chairperson of the Federation of Irish Fishermen (FIF).

In an industry that is traditionally predominately male, she first made headlines when she replaced Gerard O’Flynn as chief executive officer of the Irish South and West Fish Producers Organisation in January 2010.

Speaking to The Southern Star after her appointment Eibhlín said: ‘2015 will be yet another challenging year for Irish fishermen.’

As chair of FIF, she said she has a number of priorities for 2015, including the implementation of the Landing Obligation, which means that vessels will now have to land all fish they catch.

According to Eibhlín, the reductions in the 2015 quotas for key species such as cod, haddock and whiting in the Celtic Sea and Pelagic species, such as horse mackerel and herring, will have a significant impact on those involved in those fisheries in 2015.

Challenging the penalty points system implemented in 2014 will also form a significant part of FIF’s work for 2015, she added. ‘While FIF understands there is an obligation on Ireland to implement a penalty points system, we have written to Minister Coveney on several occasions – both before the new system was implemented and after – setting out what we believe regarding the obligations on Ireland under EU Law, and pointing out that in our view the way the system has been implemented by the minister is unconstitutional,’ she added.

To give an example, she said: ‘A person will be given points when an SFPA office believes an offence is detected, and these points stand, even if a subsequent court case finds the person not guilty. This is clearly contrary to the ‘innocent until proven guilty’ principle.’