Guy Pendred, who spoke movingly about the loss of his father in the Fastnet race, when he was aged just 12. 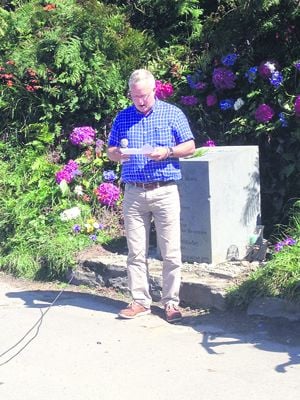 Guy Pendred, who spoke movingly about the loss of his father in the Fastnet race, when he was aged just 12.

A MEMORIAL service was held on Cape Clear Island last week to honour the memory of those who died, both in the race and as spectators.

The ceremony was facilitated by Norma McElligott in her capacity as a Humanist chaplain.

In 1979, the Fastnet race began in fine weather and high spirits, but in the space of forty-eight hours, the event had turned into every sailor’s worst nightmare. A violent Force 10 storm swept across the Irish Sea, catching the sailors and weather forecasters completely unawares.

A freak storm wreaked havoc, culminating in the most disastrous episode in the race’s history.

The storm struck in an era which was still without the modern navigational aids that we take for granted today.

Some crews who escaped to the presumed safety of inflatable rafts were horrified to discover that they disintegrated under the force of the waves.

Only 85 boats reached the finishing line in Plymouth, five sank and 15 were abandoned.

Norma McElligott reminded the audience that we are challenged as human beings to accept that some things are beyond our control. ‘It is hard to put a meaning to such an event, all we can do is learn from it,’ she said.

‘Indeed as a result of the comprehensive investigations afterwards, many compulsory safety precautions have been put in place that have since saved lives.’

‘It is indeed fitting that we commemorate such an event today in such a setting as the beautiful island of Cape Clear, surrounded by the sea, reminding us of its beauty, its vastness and its power,’ she added.

‘As Jimi Hendrix said, “Even castles made of sand fall to the ocean.” We are in the midst of a community who are only too aware of the power of the sea and of the sense of loss it has caused them. They, too, have experienced loss and today remember loved ones who were once part of their island community.’

In 2003, as part of Lifeboat day, the islanders in Cape Clear erected a stone with the names of the 15 competitors who were lost in the race.

Then Guy Pendred, son of Richard Pendred, contacted the committee and reminded them that his father, a spectator, was also lost in the tragedy. It was not only competitors who lost their lives, but spectators from two boats who were shadowing and watching the race.

The two boats were Bucks Fizz, with Richard Pendred on board, together with crew members Peter Pickering, Olivia Davidson and John Dix. The other boat was Tempean, from which Denis Benson and David Moore lost their lives.

The committee arranged for the six names to be added to the memorial stone in the harbour.

Guy Pendred was in attendance last week with his mother Sally, who was widowed in the tragedy. He spoke movingly of his memories at the age of twelve and of being told his father, Richard, had died at sea. His brother, Mark, was only eight. He thanked the committee and especially Mary O’Driscoll, on behalf of himself and his family, for acknowledging the loss of the life of his father and the other spectators, by adding their names to the stone.

He said he had been overwhelmed by the warm hospitality that had been shown to him and to his mother Sally by the islanders.

Anne O’Regan spoke of the losses endured by many island families over the years, reminding us of the dangers of the sea.

There was a minute’s silence to give those present time to reflect on the many lives lost during the years.

Norma McElligott concluded by acknowledging the Trojan work done by the Lifeboat Service in The Fastnet 79 and the Baltimore 15, and indeed in the many other rescue missions that they have been involved with.

‘The Lifeboat Service has shone a light and given back hope to so many in their darkest hours.’

It continues to be a beacon of hope especially in coastal communities, she said.