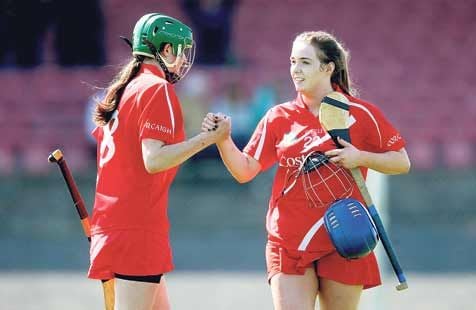 PAUDIE Murray has given Cork camogie youth its fling – and it has responded in style.

The former Doheny footballer, now in his fourth season as Cork camogie manager, guided his team back into the Division 1 final of the Irish Daily Star Camogie League after a 1-12 to 0-10 semi-final win against Limerick at Charleville on Sunday.

‘I’m delighted with the way we have gone about it,’ Murray told The Southern Star.

‘We have gone the youth route. Ten of the players that played a part in the league semi-final win were under 21 years of age. To get to a league final playing with such a young team is a great achievement.’

Sunday’s semi-final, against an up-and-coming Limerick, was close for the most part, and it was only in the last ten minutes that the All-Ireland champions’ experience showed as they pulled away for a five-point victory.

Cork went ahead early on with a goal from Amy O’Connor and she added a quick point before the Limerick defence, in which Sarah Carey excelled, managed to put the shackles on her. Cork led 1-5 to 0-7 at the break. It was nip and tuck in the second period, with Orla Cotter, who finished with six points, and Limerick’s Niamh Mulcahy (0-7) exchanging scores.

Aisling Thompson and Cotter showed well when it really counted, while Briege Corkery had a massive impact off the bench in that closing period, as Cork are back to defend their league crown – Galway to provide the opposition on Sunday week.

This final will be another step in the development of this team, explains Murray, who had experienced duo Briege Corkery and Gemma O’Connor on the bench for last Sunday’s game.

‘Over the last two years we have been developing the senior B team – I am involved with them as well – with an eye to girls making the step up. It’s so far, so good, but there is a long way for them to go to play senior A championship,’ Murray said.

‘If I looked at Laura Treacy this time last year she was struggling to hold down a corner back position, but this year, and if you have seen her displays to date, she is certainly the form full back in camogie, and possibly the form back. It shows that anything can happen, provided they want it.’

After established figures like Jennifer O’Leary and Joanne O’Callaghan retired, Murray commented: ‘I am never afraid to give young players their chance but our hands were being forced, as we had to find replacements for three players from last year. We had to find a corner back and two forwards.’

While the championship offers the big prize that Cork have their eyes set on, early-season silverware in the league, while a nice trophy to win, is not the priority.

‘We’d be looking to start a lot of those young girls in the final,’ Murray said.

‘The league is not the concern for us. It hasn’t been since the start of the year. What matters to us is finding new blood, so win, lose or draw, all I am looking for is the players to perform well and show that they are able to play at this level.

‘If we come away with a victory I would be over the moon when you consider that we have not trained hard yet. I think we have 23 sessions done, and six of those would have been of the level required. Even at that we have been missing some of the senior players. The final is before the national league hurling final in Thurles, which is great for us, with the Cork hurlers being in that final too.’

Meanwhile, in their semi-final, it was easier for Galway than many would have expected as they beat champions Kilkenny by 5-7 to 2-9 at O’Connor Park – Ann Marie Starr and McGrath getting the key Galway goals.