ONE of the highlights of social distancing has been the various sports stars who have taken to social media to show and share their talents, and from a Ladies Football point of view, Cork’s Orlagh Farmer has excelled.

For the last five days, she has posted a daily video for aspiring and current footballers to work on the basic skills of the game. As well as working the core skills like passing, kicking and movement, she even delved into the world of Chinese martial arts with Tai Chi Thursday.

Like every sports team in the country, the Cork ladies footballers are on a break from collective training due to the Covid-19 outbreak, but with four wins from their five league games, Cork finished joint top of the Lidl NFL Division 1 with Galway and face into TG4 Senior Championship with confidence.

But now Farmer (27) has put her full attention into completing her PhD – the Design, Development, Implementation and Evaluation of the Gaelic4Girls intervention – as well as the five-day online challenge.

‘My research is heavily involved in promoting sport, particularly for girls. I’m nearly finished my PhD in UCC. I’ll be submitting in the next few weeks,’ said Farmer.

‘I have always tried to be as creative as a I can. After my years of working with young girls and doing my research, I said I put together the five-day challenge to get everyone out and about.

‘Tai Chi Thursday was just something different. I gave it a try and I got a great response. We could all do with a bit of relaxation these days. We’re all a bit overwhelmed and a bit stressed.

‘People are more open than ever now – they are all going off their heads at home – so I brought a bit of football into it too and it went down well.’

With her brother Kian – a software development student at CIT – and sister Sinéad on camera duty, Orlagh has produced this week’s video content, which has attracted thousands of individual views all week, and her drawing board is already populated with plans for next week’s sessions.

As part of her PhD research at UCC’s Department of Sports Studies and Physical Education, Farmer came to some staggering conclusions though, which underline the importance of sport in the lives of young girls. With an estimated 50 per cent drop out rate by the age of 12, keeping girls in the game can be tough, but according to the Cork forward, it’s vital that coaches and parents tap into their interests.

‘I focused on eight to 12-year-old girls. Working with Gaelic4Girls (an LGFA programme that targets girls who are not already registered players) one of the main conclusions I reached was that young girls aren’t reaching the recommended 60 minutes of moderate to vigorous activity per day. Only about 20 per cent of girls reach that target.

‘We also noticed a skills deficiency when it came to fundamental movements: running, skipping, hopping, jumping. Less than two per cent were fully proficient and met the criteria.

‘Then there is the psycho-social wellbeing side of things. The big motivators for young girls are friendship and fun. On the other side of it, a lack of enjoyment and coaches being too strict were big turn offs for girls.

“Confidence was also a big issue. They wonder, ‘Am I able to do this? Can I kick the ball? Do I feel good about myself?’ Girls need confidence to be physically active. That is so often the most important aspect.” 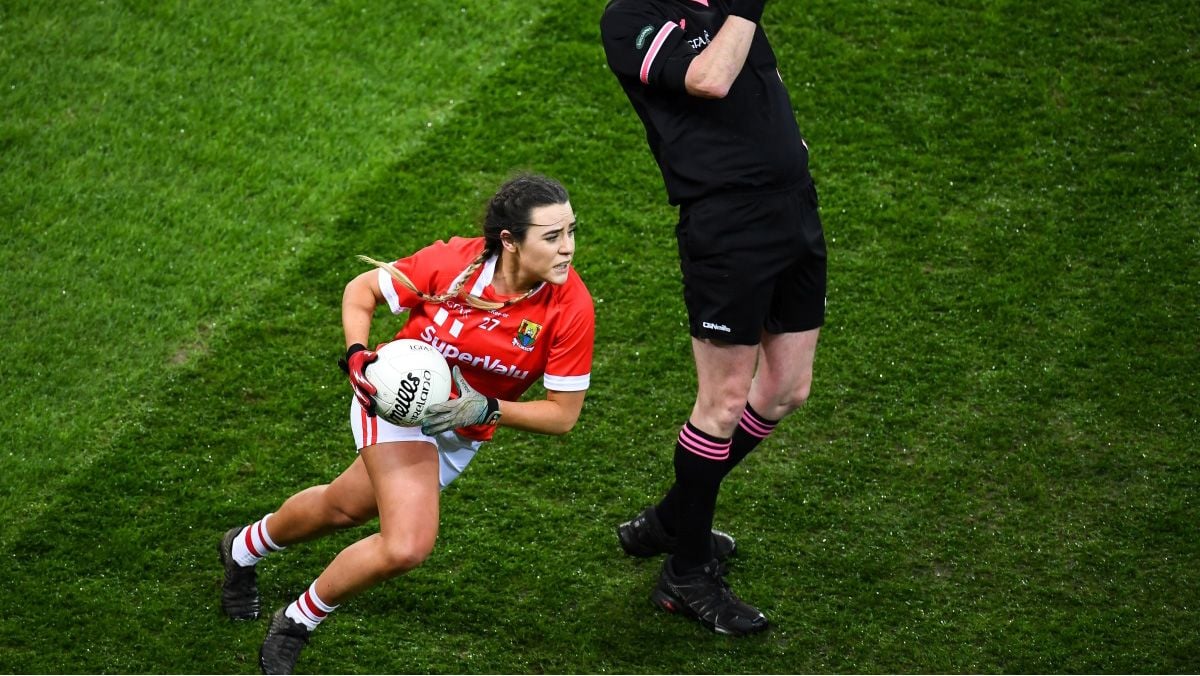 Orlagh Farmer in action for Cork.

Like the rest of the sporting population, Farmer has had to be happy to try to stay fit in her own back yard or on the green in front of her home in Midleton. After a hectic few months of the season it is tough to press pause, but she has big plans for later in the year.

Once Cork’s inter-county season is over she has pencilled in a spell travelling abroad, where she hopes to introduce her ‘multicultural movement mission’ to the world.

‘I was in my car one day and suddenly I realised how I could get more girls active: merging the skills of Ladies Football with basic fundamental skills and a movement dance, which is accompanied by music. Girls love to dance: it’s a perfect form of expression in terms of skills and confidence.

‘After chatting it through with my supervisors, Dr Wesley O’Brien and Dr Kevin Cahill, I went out to my back garden with my speaker. I didn’t have a clue what I was going to do, but I followed my gut feeling. I started to choreograph the dance to the song Galway Girl. I even fell through my decking doing it and nearly broke my leg!

‘When I put it together we then did it for 20 minutes before each session at Gaelic4Girls and performed it at the end of the eight weeks. The response was great, they really enjoyed it. It created a positive buzz for the girls and boosted their confidence.

‘As a result I want to develop this further. I am hoping to eventually hit schools and clubs, but also to bring it over to other sports. When I go travelling I want to trial it out in different cultures. While I’ll be travelling South East Asia, Australia and New Zealand the plan is to record a documentary on how I get on with different sports and cultures. How it can be translated from football to other sports is key.

‘It’s a common goal across the world: how can we impact girls all over the world to stay in sport. You know when you have a fire in your belly, you just have to do it.