Not so fan-tastic: With an empty terrace and stand in the background (a regular sight at women's GAA games), Cork's Jennifer O'Leary takes a free with a late chance to win last season's epic Liberty Insurance All-Ireland camogie championship semi-final ag 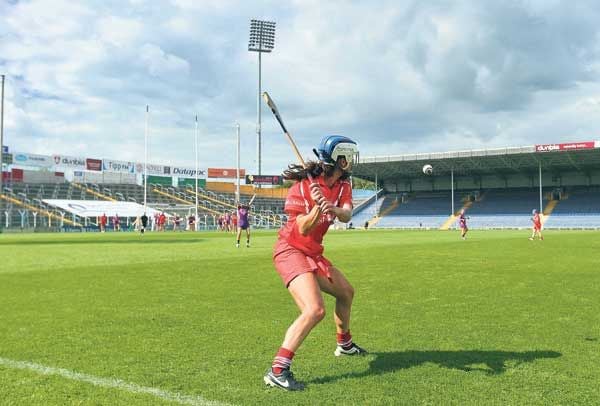 Not so fan-tastic: With an empty terrace and stand in the background, Cork’s Jennifer O’Leary takes a free with a late chance to win last season’s epic Liberty Insurance All-Ireland camogie championship semi-final against Wexford.

IT’S getting better. It’s moving in the right direction. But the questions still remain – why is the media coverage of women’s games still so far behind our male counterparts? And what can we do to improve it?

Women’s sport has timelessly elevated the hearts of many an onlooker and given sheer joy to the people of Cork.

Our camogie and ladies’ football teams have continuously reached their highest peak and ensured the Brendan Maher and O’Duffy cups have, time and time again, returned to the Leeside.

They have willingly approached each season with a drive and hunger for success. But what motivates them each year? What relentlessly drives their appetite?

Is it the fame, the recognition and acknowledgement from others of their success? Is it the feel-good factor of being immensely fit? Or is it just the pure love of the game?

It may be a combination of everything but I know from experience, it definitely isn’t solely for fame or love of media coverage, because this is one element of playing sport as a woman that is seriously lacking.

Having played with the Cork senior camogie team for over 12 years, I know only too well the amount of time and dedication that goes into playing for your county.

It is a welcome commitment, one that I relished every gruelling step of the way, training three times a week out on the field and twice in the gym, and in my final year I was commuting from home in Armagh to Cork on a regular basis. Not to forget giving valuable time to your club on top of this.

It was a lifestyle that was addictive and normal when you are part of it. Even now in retirement, that pull to fill your time with sport still remains.

Now, put yourself in the shoes of an inter-county dual star, who, without question, spends every evening attending various training in different codes, working diligently behind the scenes, not asking for any praise in return.

But my question is, why is very little of the hard work of the women not documented or highlighted on television?

How are we not afforded the opportunity to promote our game as much as men in GAA are? Why are women reluctant to support other women in sport?

As I replayed these questions over and over again in my mind, I didn’t want to sound like I was complaining or comparing ourselves to men, but, unfortunately, I couldn’t help making the following assessments.

Yes, physically men are stronger, they are probably faster in most cases and have the ability to excite many an onlooker while skilfully playing football or hurling.

But aren’t women exceptionally skilful, tactically aware and astute at making quick decisions on the field?

Are we not speedy, getting stronger each year and quite able to play a game that lifts a crowd on a wet Sunday afternoon? Why is it that we don’t get the same recognition as the men?

Through further reasoning with the those points, I looked at the numbers who actually attended women’s games. In the 2014 All-Ireland senior camogie final, the recognised attendance in Croke Park was just over 15,000. Not a staggering figure when you acknowledge that the stadium can hold well over five times this amount.

Further to this, the number of people who watched the game on the television was close to 300,000. Again, with a population of over four and a half million people, how come the viewing figures are so low?

It goes without saying that without a generous amount of support at games, the options to view games on the television will greatly suffer. If the interest isn’t there from the public, it generally doesn’t translate onto the big screen.

Also, from a camogie perspective, the only full game – apart from the Munster final – to be shown on television was the All-Ireland final.

We all know that finals can sometimes turn out to be a disappointment due to players’ elevated stress levels, an over-hyped game that is not allowed to flow, teams adopting anti-playing tactics by focusing on defence rather than attacking forward and some other elements out of our control come into play – the unpredictable Irish weather.

Some of the finest games are played mid season, in the height of championship season, when qualification for the latter stages of the season is so important.

Our All-Ireland semi-final replay against Wexford last year was one of the best games we played all year, a great promotion of camogie and a brilliant display of skills from both sides for many people to admire. Yet, only five minutes of the actual game was shown on The Sunday Game. That’s disappointing.

While this lack of coverage is annoying for the players, the biggest losers are the young, avid camogie girls who would be enthralled and inspired by the game and perhaps motivated to try the game for themselves after they watched how exciting camogie is.

Even better, being at the game itself would have given them food for thought in their own playing career.

There will always be those dedicated and loyal supporters of the teams who go to every game like they are following a religion. They are the parents and relatives of players, the friends who understand your commitment, the young club girls who aspire to follow in your footsteps or those in search of a new role model.

While our achievements would mean nothing without this valuable support, honestly, I think the current players of today deserve more.

Sadly, I feel that we sometimes talk the talk but fail to walk the walk. We have this overpowering inclination to complain about it yet complaining doesn’t get you anywhere unless you act on it.

It’s up to us to promote change by attending those games ourselves and by using various social media, like Twitter and Facebook, to alert followers of the women in sport’s progress.

It’s up to us PE teachers and us coaches to educate our pupils on the women’s games and make them aware of upcoming fixtures, take the initiative and bring them to these games ourselves.

It’s imperative that we promote an attitude of support as opposed to reactive following. After all, nothing beats being there.

We need to regularly do what the Ladies’ Football Association cleverly did in the promotion of the Monaghan v Cork league game over a month ago by sending their football stars into schools to give out free tickets to their game in Castleblayney, Monaghan.

Our associations need to keep coming up with new and inventive initiatives that draw our young players from over 500 clubs around the country to the games.

Young players deserve to see their role models. Us women need to support women. We don’t need to change the name of our sport, we just need to change our attitude towards women in sport. Get out and support your ladies’ teams. They won’t disappoint.