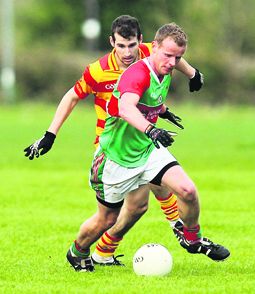 Race for possession: Donal Lyons in action against Newcestown in the first round Cork SFC game.

THERE has been plenty of soul-searching in Clonakilty these last few weeks in the aftermath of their first-round Cork SFC defeat to Newcestown.

It wasn’t the result (0-16 to 0-8), as Clon agree that the better team won, but it was the manner of the performance that has rankled Clon – they were miles off the pace required. Their first-round report card read: must do a lot better. Selector Eoin Ryan agrees.

‘We didn’t perform at all against Newcestown so we need to prove to ourselves that it was a once-off. We have to play to our full potential against Skibbereen on Sunday to have a chance of winning,’ he said.

‘Bishopstown are one of the fancied sides in the competition, semi-finalists the last few years, and Skibbereen could have turned them over.’

With the club’s junior footballers and then the U21s, last weekend to Nemo, both losing, it’s been a bad couple of weeks for the club, but the seniors have to respond on Sunday – or face a tricky third-round test.

‘No matter who we would be playing it’s a huge game, whether it’s a derby or not doesn’t really matter, the bottom line is that we have to perform. It doesn’t matter if the opposition is from West Cork, North Cork or the city,’ Ryan said.

‘There is a back-door again but no team wants to be going into round three this year. There’s going to be some good sides in there when you think that Clyda will be there.’

Looking back on that loss to Newcestown, despite trailing by eight points at the break, they battled well in the third quarter, with Sean White, Tom Clancy, Fionn Coughlan and Sean McEvoy all prominent.

‘The positive was that we fought hard in the second half after being 0-10 to 0-2 down at half time. We didn’t lie down, we didn’t accept defeat and we did fight back – that’s a good sign of the team,’ Ryan said.

‘I know the lads are a lot better than they performed that night and they know that can play a lot better as well. The bottom line is that we need to turn in a performance to have any chance.’