MICHAEL Hourihane has more in common than most with Ireland’s greatest ever rower Paul O’Donovan.

Both row for Skibbereen Rowing Club. Both have won national championships in the famous red and white singlet. Both are physical beasts, though Michael towers over Paul by six inches. And both hail from agricultural backgrounds that hardened them for the uncompromising rigours of rowing.

Paul has previously given a nod to his farming background – his dad, Teddy, had a small dairy farm in Lisheen – and how his younger days helping out gave him – and his brother Gary – a good work ethic that transferred to rowing.

‘There is definitely something in that,’ Rosscarbery farmer Michael agrees. He works on the family farm in Reenascreena, just outside the village, and is no stranger to long days.

‘It’s hard work but you get used to it. You’re not afraid of the cold or the wind or the rain, you just get on with it.’

Six-foot four-inch Michael doesn’t balk at hard work, on the farm or on the water, and his application to work – and training – is one of the main reasons this late starter to rowing, in his first full season, won a ‘pot’ at the 2022 Irish Rowing Championships: he was 27-years old when he won the men’s club single sculls title.

He exceeded his own expectations. 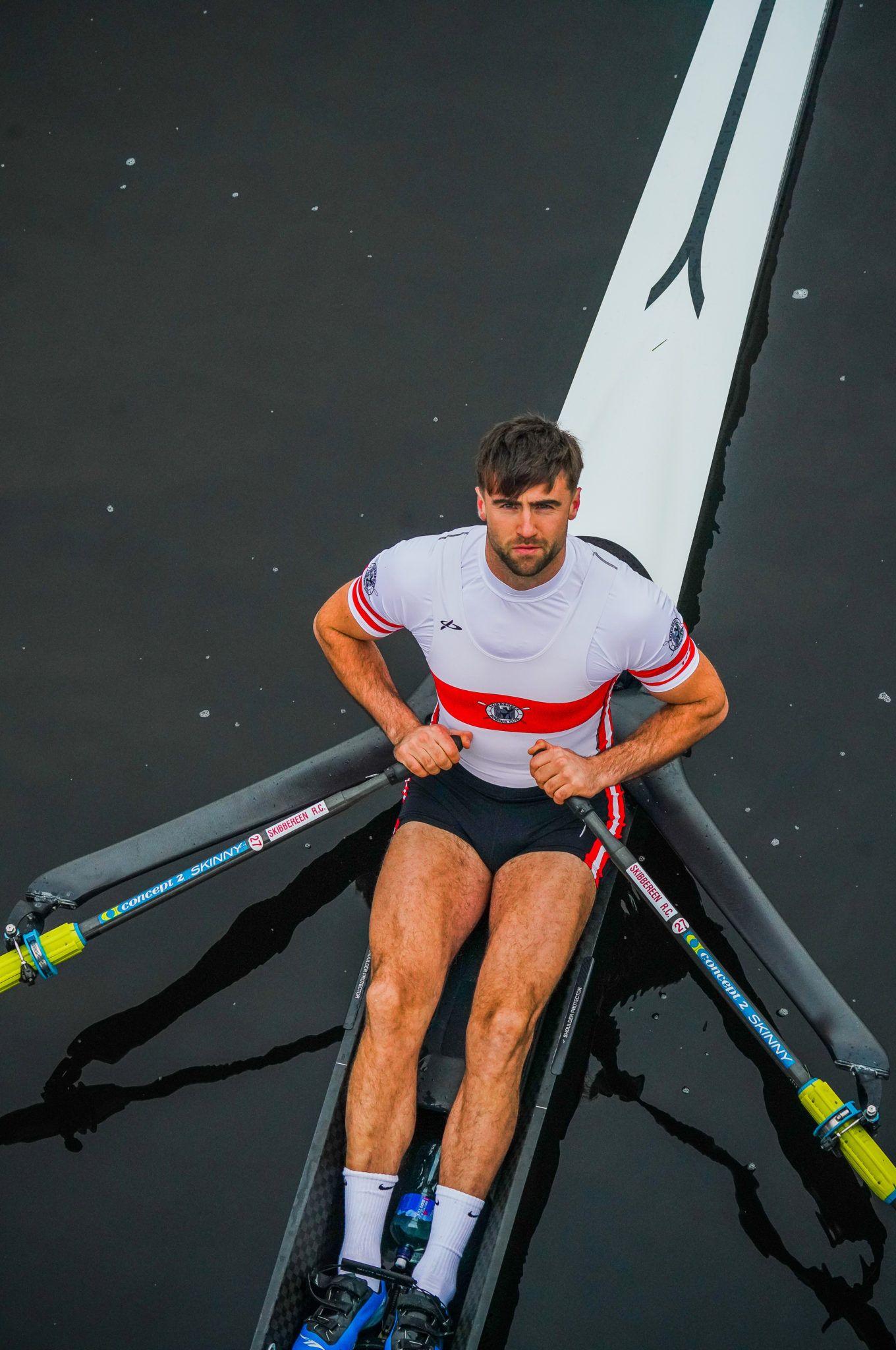 ‘When I first started with Skibbereen Rowing Club (in 2021), I didn’t envisage I’d get to this level or stage,’ he admits.

He started taking training seriously in December 2021, under the guidance of coach Denise Walsh, and by the following July Michael had his giant hands clasped around a national title at the championships. It’s one of four titles Skibb rowers won that weekend, with Olympic champion Fintan McCarthy bringing two back west. Michael was in good company in the Skibb tent at the National Rowing Centre.

It’s a remarkable rise: from new kid on the block to national championship winner in eight months.

‘When I joined up with the club in 2021, I had zero sculling experience; nothing. Plus I was old (26 at the time) so it was difficult to start and see where I would fit in,’ he admits, but Denise Walsh took him under her wing.

‘I started training more consistently in December ’21 because I wanted to make a go of it. I came every single day, went out with Denise’s group and tried to learn the ropes. It was a slow start but as the year progressed I was going from strength to strength, thanks to Denise and the time she gave me; I really am grateful for the work she put in.’

Michael has a background in coastal rowing from his teenage days, with his local Rosscarbery Rowing Club. He played football with Carbery Rangers, too, but a nasty snapped ACL while playing football derailed his sporting adventures.

Before the injury the Ross man had dipped his toes in the River Ilen with Skibbereen, and wanted to test himself in river rowing. It was a very brief stint. The knee injury kept him off the water and off the football field for years – but rowing was always in the back of his mind.

‘After college I started cycling and going to the gym, but what I was missing was the competitive element, and that drew me into it,’ he explains. Friends with Bernadette Walsh, sister of Denise, the dots were joined from Rosscarbery to Skibbereen.

‘I was very aware that if I was to make a go of it I would be single sculling because I wouldn’t be depending on anyone else for training. The single sculling was a big learning curve,’ he says.

Michael was starting from scratch, but had a good base: he had rowed before, was fit and strong, and he embraced the challenge.

‘Rowing as a sport, it is more intensive than any other sport when you compare the training load,’ he says. ‘You are training every day, at least once. It was figuring out how to make things work at home while progressing with the rowing, and I’m still figuring it out.’

His parents John and Maura and younger sister Anna help out on the family farm, giving Michael the flexibility to chase his rowing dream – and he has grabbed it, with the stars aligning at the Irish Rowing Championships on Saturday, July 16th at the National Rowing Centre. Michael’s convincing triumph to win the men’s club single sculls – he used every inch of his giant frame to power to glory – means his name will be etched on the championship board that dominates the hallway of Skibbereen Rowing Club. This is a symbol of its greatness. Skibbereen is the country’s most successful rowing club and has now won 190 national titles, with Michael playing his part; his name sitting amongst the club’s greats, including his coach Denise Walsh.

‘When people see the board, they might not say it but they want to get their name on it,’ Dominic Casey previously explained. Michael’s name is now there.

There is more to come, he feels. He turned 28 years old in December and with his first ‘proper season’ of rowing under his belt, he is more focussed on what he could actually achieve on the water. Everything in 2022 was a first: his first Skibbereen Rowing Regatta, his first Irish Rowing Championships, and so on.

‘We want to drive it on this season. I have a bit more experience under my belt. At any level, with the scull and rowing in general, it’s like compound interest, what you put in you will get out. It’s continuous and it’s never a finished project; there is always something to be working on,’ he says, as this late starter to rowing makes up for lost time.