AT present the West Cork GAA Board is redrafting its byelaws to keep up with the many changes that have taken place since the last set of byelaws were drawn up in 2014 and to have the new byelaws firmly in place when the division celebrates its centenary in 2025. One of the issues to be decided in the redrafted byelaws is the name of the division itself.

The present name is ‘South-west Cork GAA Division’, which dates back to 1926. In Irish, it is ‘Roinn Iar-dheisceart Chorcaí.’ From 1887 to 1899, the GAA in West Cork was under the direct control of the Cork County Board and in 1900 a sub-committee of that board was set up to manage affairs in West Cork.

The West Cork Gaels wanted their own county board but that was turned down and the sub-committee was given instead. That West Cork committee, the only one in county Cork, had its highs and lows over the following 25 years, right through the troubled times in Ireland, but by 1924 it was struggling badly to organise affairs following the aftermath of the War of Independence and the Civil War. In 1924, the county board set up the other divisions in the county to manage GAA affairs and the West Cork committee was given official recognition as a divisional board.

However, in 1925 because of the inactivity of the West Cork committee, five clubs, namely Bandon, Kilbrittain, Kinsale, Knockavilla and Innishannon, all of whom had been playing in South Cork leagues, decided to break away from the West Cork Board and to ask for permission to set up their own board. The county board granted that permission and the new board, consisting of the five clubs, was named ‘The South Cork Board’. Bandon became the first football champions of the new board, and went on to win the county junior title, while Kilbrittain became the first junior hurling champions.

In 1926, the Clonakilty club applied for, and were granted, permission to join the new South Cork Board and because they were the most western of the clubs, the board changed its name to ‘The South-west Cork Board’. In 1926 only two clubs took part in the old West Cork Board championships and by 1927 it was gone out of existence, with all the clubs from Bantry to Innishannon then part of the South-West Cork Board. The division retained the name ‘South-west’ even though the board catered for all clubs from the whole of West Cork.

In 1930 the South-west Board, as there were no senior teams in the division at that time, applied for permission to enter a divisional football team in the county senior football championship – and permission was granted. It was officially decided at board level to name the new divisional team ‘Carbery’ after the old Gaelic name for the West Cork area. A Carbery hurling team was entered for the first time in 1933. Over the years the name ‘Carbery’ became associated not only with the two divisional teams but also with the division itself, especially over the past 20 years. Many supporters outside West Cork would be more familiar with the ‘Carbery division’ rather than the official ‘South-west Cork Division.’

Clubs are now being asked to air their views on which name should be included in the new draft bye laws and should become the official name of the division. But maybe it would do no harm to look at the name ‘Carbery’ before that decision is made and see where the name originated, as many are of the mistaken opinion that it is an English creation and would not be suitable as the official name for the division. 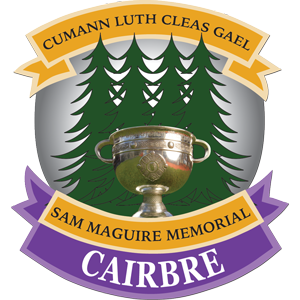 The meaning of ‘Carbery’ is unclear but it is thought to be named after a clan called the Uí Chairpre, part of the O’Donovan Clan, who were forced to leave Limerick and came to West Cork about 1200 AD. They settled around the Drimoleague area and brought with them the name ‘Cairbre,’ from their ancestral home in Limerick, Cairbre Aebha. Some experts believe the name is much older, dating back to 300 AD. It may have been named after a chieftain called Cairpre or Cairbre. The Uí Chairbre clan was part of the Corca Luidhe (O’Driscoll’s) who ruled much of West Cork, especially along the coast.

Carbery became a semi-independent kingdom, founded by Donal Gott McCarthy in the 1230s and ruled over by the McCarthy Reaghs. They had broken away from the large Kingdom of Desmond. Carbery was one of the wealthiest principalities in Ireland, the wealth coming mostly from the many excellent harbours along the coast and its proximity to France and Spain. Some of the eastern part of the principality was quite fertile and the McCarthy Reaghs were reported to have the greatest income of all Gaelic princes in Ireland, except for the Earls of Desmond, who often forced the McCarthy Reaghs to pay tribute.

The principality lasted about 300 years and began to decline in the late 16th and early 17th centuries. It officially ended in 1606 when Donal of the Pipes, the 17th Prince of Carbery, chose to surrender his territories to the Crown of England. His descendants maintained their position in Carbery until the Crowellian confiscations and settlement, following McCarthy's participation in the Rebellion of 1641.

In 1628, the English Earldom of Carbery was created by John Vaughan, who became the 1st Earl of Carbery, and this became extinct in 1713 with the death of the 3rd Earl, also named John Vaughan. Two years later, 1715, the Barony of Carbery was granted to the Anglo-Irish politician, John Evans, whose descendants still hold the title, Baron of Carbery. Their castle was Castlefreke, near Rathbarry. The name Freke came into the family from Grace Freke, daughter and heiress of Sir Ralph Freke. She married the Hon. John Evans, younger son of the 1st Baron of Carbery, and the Baronetcy of Castlefreke was created in 1768 for their son, John Evans-Freke. In 1807, the 2nd Baronet of Castlefreke became the Baron Carbery and the two titles have remained united ever since.

In 1892 John Evans-Freke, 10th Baron Carbery, was born and in 1920, because of his nationalist views, renounced his title which passed to his nephew. The present Baron Carbery, the 12th, is Michael Peter Evans-Freke, born in 1942, who took the title in 2012.

When the Normans conquered Ireland after 1169, they divided the country into ‘Cantreds’. The cantreds were often based on old Gaelic tuaths and were used mainly for the raising of taxes, and to a lesser extent, for administrative purposes. Baronies replaced the cantreds during the Tudor reconquest of Ireland in the 16th century. Whilst there were 184 cantreds, there were 252 baronies. The baronies were sometimes subdivided, as was the case in Carbery, which was divided into East and West Carbery. Many towns were granted Royal Charters in the beginning and were independent of the baronies. The Local Government Act of 1898 introduced elected County Councils for the first time, the county being divided into urban and rural districts. County Councils ended the administrative duties of baronies but the baronies continue to be used in land registration and planning permissions.  Carbery was the largest Barony in Ireland, stretching from Bantry to the Bandon River before being whittled down by warfare between the various clans. The old Barony of Carbery is now divided into East Carbery and West Carbery and both of those are again sub-divided into East and West divisions. The boundary between East and West Carbery is a line from Glandore Harbour, through Leap to the Muskerry border.