THE 2022 International Mixed Ability Rugby Tournament (IMART) World Cup took place in Cork recently after being postponed in 2020, with players from West Cork competing across the week-long programme of games.

The West Cork Jesters made it to the Men’s Plate Fifth-Place Playoff and drew with Halifax Magpies on a score of 75-75, while a group of West Cork ladies teamed up with Ballincollig Trailblazers to win the Women’s Bowl final, finishing third overall.

The tournament took place at Musgrave Park, with teams travelling from all around Ireland, the UK, Spain, Argentina, Chile, Ecuador, Canada, Italy and Belgium to compete.

The West Cork Jesters were one of three Munster-based mixed ability teams that competed, with the Sunday’s Well Rebels and the Ballincollig Trailblazers being the other two.

Nobby Dunne is a founding member of the West Cork Jesters. He says that they are in a much better place in the sport than they thought they were.

‘Before the World Cup, we were just looking for a learning experience, and we learnt a lot of things we didn’t know from a tactical point of view, but on top of that, we had a blast,’ says Nobby.

‘The week was full of challenges, victories and losses, and we learnt more over the course of the week than we would have in a full season.’ 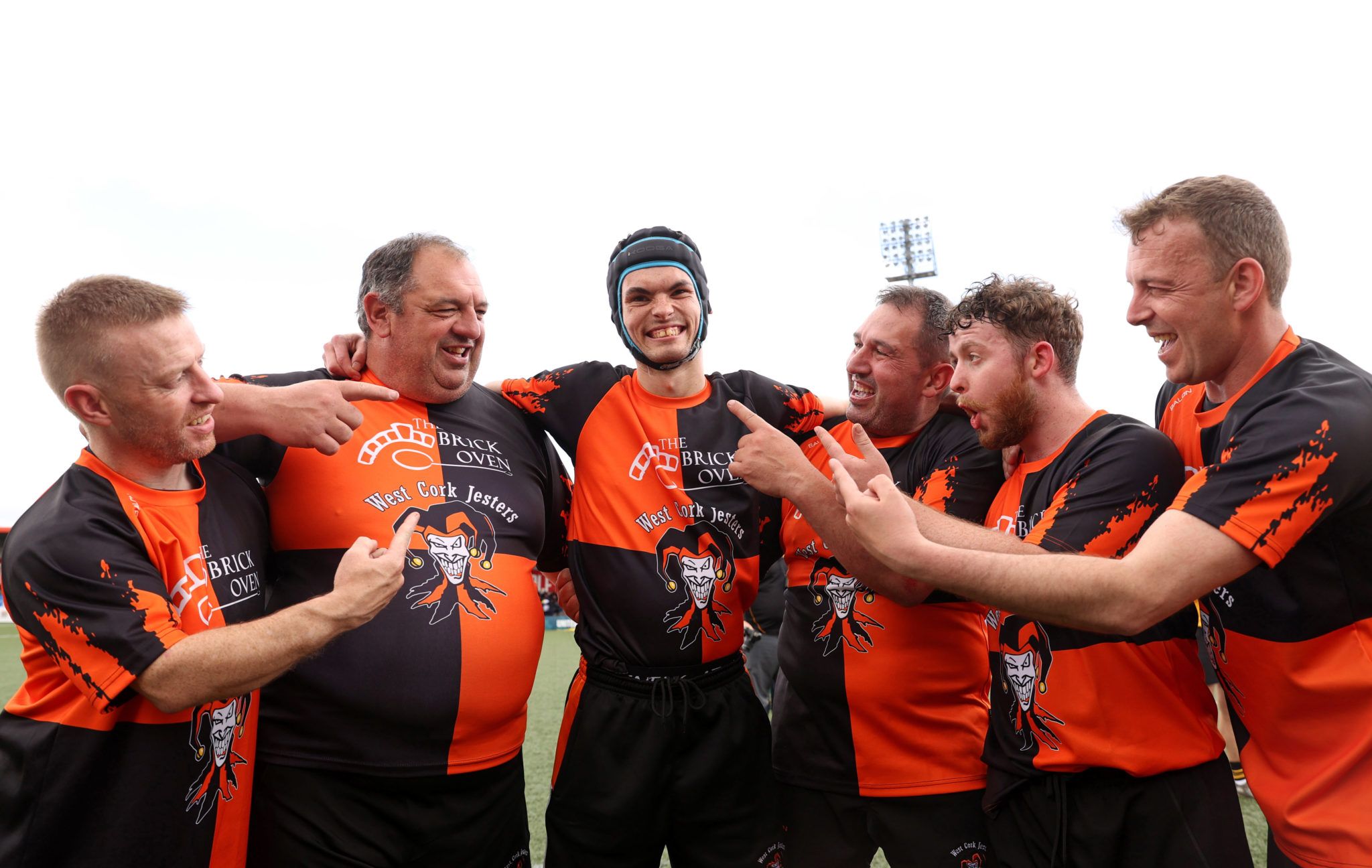 The West Cork Jesters played multiple games over the course of the six-day tournament, and while the first few games were like life or death, things lightened up for the final game.

‘It was pure fun. We took the laws of rugby and destroyed them. Officials were playing, supporters were dragged onto the pitch to play, it was mayhem. Five Munster Rugby Development Officers lined out for us at the matches. It was all down to a love of rugby!’

This year’s event saw 24 men’s teams competing for the overall winner’s trophy and it was the first time that a Women’s Mixed Ability Rugby Tournament was held as part of IMART. The female West Cork Jesters players joined up with the Ballincollig Trailblazers for this inaugural tournament, but the West Cork club will have enough players to field their own ladies squad very soon.

‘Currently, we have about 35 men, eight to 10 underage and 12 to 14 ladies. But we are always looking for new members,’ says Nobby.

Mixed Ability Rugby enables players with and without physical and learning disabilities to play alongside each other, in the same 15 a side full-contact rugby game.

‘There is no paramount when it comes to age either,’ adds Nobby. 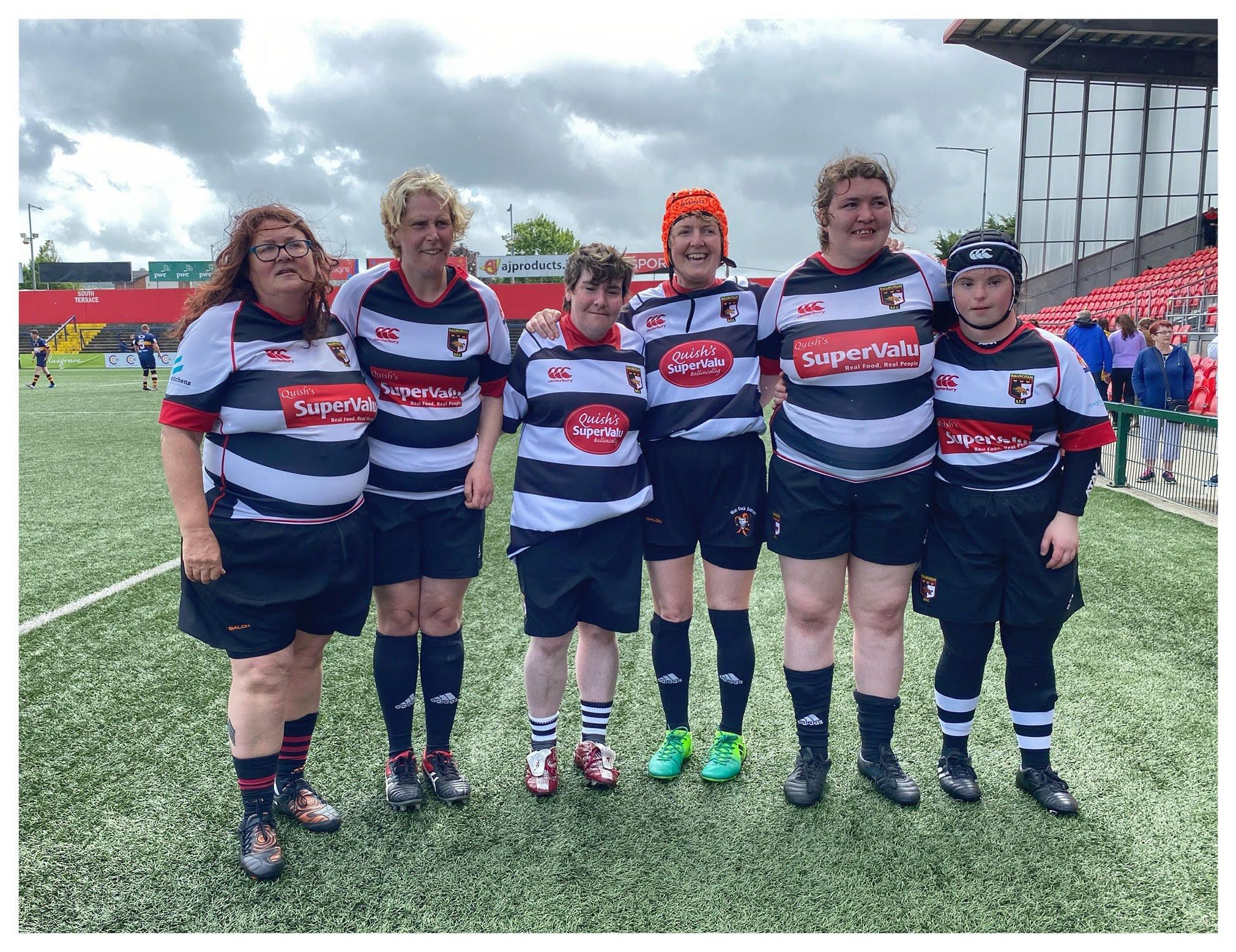 The club is made up of players from all over West Cork, as well as people who travel from Cork city and Kerry. Currently they train in Bantry and Dunmanway but are hoping to have sessions available further afield across West Cork in the near future.

The whole movement started in 2017 when Eugene McCarthy, the Munster Rugby Development Officer, approached Nobby who was working in Co-Action. He asked Nobby if he would be interested in starting tag rugby with those he worked with.

‘We started playing tag rugby and I heard whispers about mixed ability full contact rugby existing and we said we’d like a piece of that,’ he explains.

‘We are always looking for new members. Anyone who steps on the grounds will get a job. Even if it’s turning on a kettle or using a stopwatch for time trials. We are looking for a big family feel to this.’

Sue Nicholson is one such person who is involved with the squad. Nobby describes her as being great with a camera, and she looks after the photography and shares the work of being one of their online administrators. She used her photography skills to capture the atmosphere of IMART.

‘It was the most amazing event to be part of. This is sport as it should be. Most sports we watch on television these days, it’s just business. There were guys being brought on in wheelchairs to score tries, the whole atmosphere was electric,’ says Sue.

‘The hint is in the name, Jester. It’s a bit of craic for everyone involved. Everyone that comes picks up a nickname based on their personality. The rugby part is serious, but we don’t take anything else too seriously,’ concludes Nobby.

The focus for the West Cork Jesters over the coming weeks and months will be on developing the ladies and underage squads, as well as training newbies. For anyone who would like to get involved, visit West Cork Jesters Rugby on Facebook, or call 083-2037838.