One-wall indoor alleys may be the future for handball in West Cork.

In part three of our series highlighting the decline of handball in West Cork, TOM LYONS chats to Tom Ahern and Peter Dennehy, and also asks what can be done to revive the sport locally?

EVEN though there was a revival of handball nationally, and in West Cork, when the new Irish Free State was set up in 1922, it was strange that when the GAA handed over control of athletics to the ‘National Athletic and Cycling Association’ in 1923, a real effort wasn’t made to promote handball instead.

True, the GAA, for the first time, took control of the game properly in 1923 when the provincial handball councils were set up and followed in 1924 with the establishment of the Irish Handball Council, but at local level not much changed from the ad-hoc organisation of the game.

Strange, too, that the West Cork GAA Board never attempted to take control of the game or to run official competitions. Matches were arranged but it was left to the various clubs to do the organising or to run their own tournaments.

Nothing much changed down the years except that better alleys were provided in a few West Cork locations. In Clonakilty and Bandon, it was the CYMS that provided the facility. In Bantry, it was the Boys’ Club. There also was a fine and busy alley adjacent to the church in Ardfield. In Skibbereen, traditionally one of the strongest handball areas in West Cork, we see 25 years of campaigning for a new alley finally coming to fruition in 1947 when the new alley was blessed and opened.

One club that was very active in the 1960s and 1970s, was the CYMS club in Clonakilty, situated in Emmet Square. One player attached to the club, who won numerous county titles, was Tom Ahern, a member of the famed Ahern GAA family in the town. Ahern played three senior football finals with Clon in the 1960s and recently served as president of the Clonakilty GAA Club. We had a long chat with Tom about handball in his time, which was, in fact, practically the end of handball in West Cork.

‘As kids we played handball against the gable of Houlihans and then in 1959 a group of us in the CYMS got together and formed a handball team,’ Ahern explained.

‘We paid our own way, hired a self-drive car to travel to venues for competitions run by the county handball board. There were no West Cork competitions as there was no handball board in West Cork. We actually won the county novice and minor county single and double titles in 1959 and then Tim ‘Noss’ Downey became secretary of the local GAA club in 1960 and he was very interested in handball. He took us under his wing and we were properly affiliated under the club name then.’

Just how popular handball was among young players was shown by the numbers playing in the Clon CYMS alley.

‘We organised our own tournaments,’ Ahern pointed out.

‘We could have 64 players involved and we had our own handicapping system which worked very well. Some very good players came through that system between 1959 and 1974 when it all came to an end with the sale of the CYMS building.

‘At that time, we would play challenge matches with clubs like Bantry, who were very strong, and against Bandon. Bob O’Brien was a very good Bantry player in the 1970s. Some very good players came out of the Ardfield alley and there was a busy alley also in Castletownbere. Tom McGrath was the man who had handball going in Timoleague, in the alley beside the hall. We would play in the CYMS every Sunday morning and on summer’s evenings when there was no GAA training.’

In order to play official county board competitions, the Clon players had to do an awful lot of travelling.

‘Most of the handball in Cork was being played in North Cork, still is,’ explained Ahern.

Unfortunately, it all came to an end for Clonakilty, as it did for the few handball areas in West Cork, when that generation of players grew too old in the mid-1970s for competition. Ahern, himself, played in four or five senior finals but never brought home that elusive title.

‘We had some excellent players in Clon, like Nealie O’Neill and Jim McGrath, the Garda, John Fox O’Donovan, Denis Collins and Joseph Walsh. Noel Rick O’Donovan was superb and all the Tanners. Sam Tanner, the Cork football goalie in the early 1960s, was a fine player,’ Ahern said.

‘We always played 60x30 hardball but St Finbarr’s introduced the first American 40x20 court. Sam was a member there later on and won a few county titles, I think. We did run a special tournament in the old CYMS alley in GAA centenary year, 1984, and there is a small alley in the new Ahamilla complex but attempts to get the game going again haven’t worked.’ 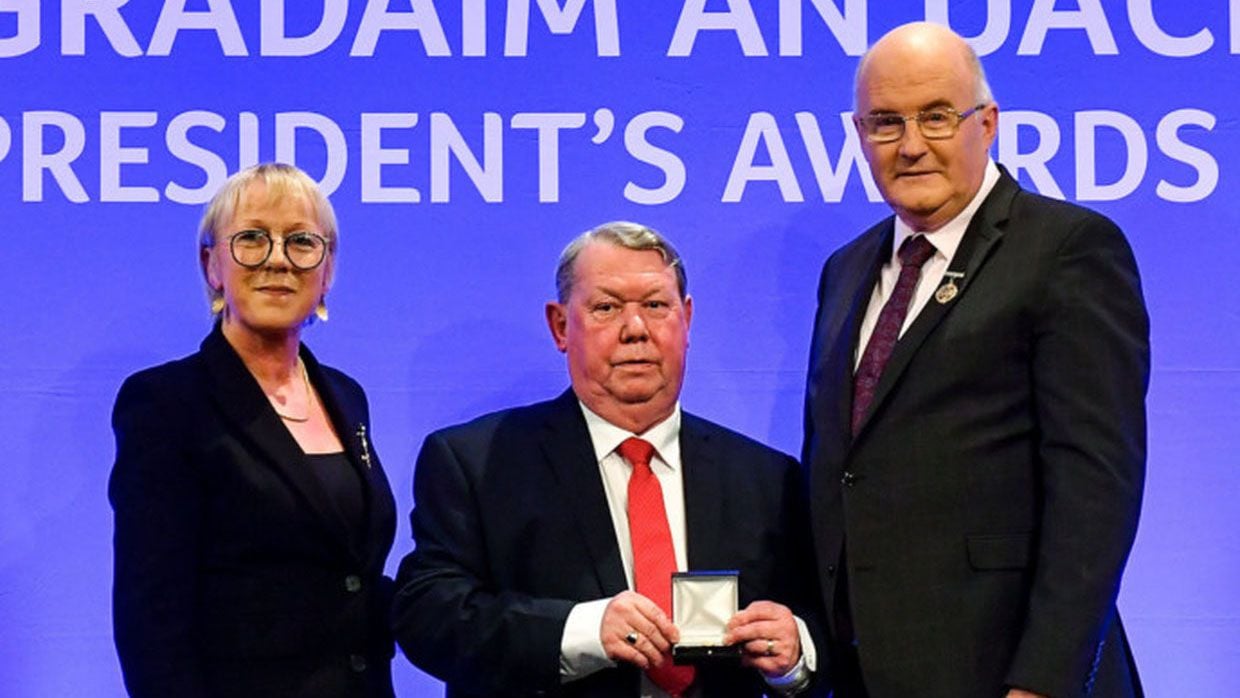 Peter Dennehy, Cork Handball PRO, receiving a GAA President's Award in 2020 for his contribution to handball.

Handball was dying all over the county when Peter Dennehy of Liscarroll, the present voice of handball in Cork and PRO of the county board, got involved in 1971. The old handball board was almost defunct in Cork. With five or six enthusiasts, he set about reviving the game through the clubs. The present success of Cork handballers on the national scene, especially underage, is a testament to the amazing work done during the past 50 years, except, unfortunately here in West Cork. Peter Dennehy was awarded a President’s GAA Award in 2020 for his contribution to handball over the years.

We spoke to Dennehy about the present handball scene and about what happened in West Cork and what could happen in the future.

‘There are 20 clubs in the county at present, stretching from Youghal to Macroom, mostly in North Cork,’ Dennehy explained.

‘St Finbarr’s is the only club in the city, with none in West Cork, not for the past 30 years since Bantry dropped out. We tried a revival in Bantry but that that ended when a storm blew the roof off the alley about 2007 and damaged the walls.

‘The game was very strong in Castletownbere almost 50 years ago with All-Ireland champions like Mícheál Lordan and Billy Power. Pat Murphy won the very first minor All-Ireland title in 1975. Their court at Brandy Hall, built in the 1930s, deteriorated and was demolished not too long ago.

‘There is a court still in Garnish but they say they are too far west to play in competitions. A new alley was built in Skibb about 30 years ago but they took away the spectator area and the referee’s box so it couldn’t be used. Ardfield was also very active in the past but it would have cost too much to renovate the alley, which is also gone.’

So what of the present situation and the future for handball here in West Cork?

‘All the alleys now, bar one in Ballydangan, are indoor courts and the one wall version is becoming very popular,’ said Dennehy.

‘The only way forward for handball in West Cork, apart from finding people interested in the game, is to incorporate one-wall alleys in any new community halls that are being built. Once the height is there, the rest is easy, but we may have missed the boat in a lot of clubs in that respect. If that could be done, then there might be a revival.

‘The provision of proper alleys was always a major problem in West Cork and that is still the case. The Handball Board would only be too delighted to hear from any club or community interested in reviving the game in their area.’

Is it possible to revive handball in West Cork? Are there people out there interested enough to make the effort, as Dennehy and his friends did in 1971? Could one wall alleys be included when building hurling walls or even new community centres? We refuse to believe that the efforts of our ancestors who kept handball alive in West Cork 100 years ago could not now be matched by the efforts of the present Gaels in Carbery.