Despite being a small nation, Ireland is one of the elite handball countries in the world.

In this first of a three-part series, TOM LYONS takes a look at the origins of handball, how it was once prevalent all over West Cork and speculates as to a revival of the ancient game in Carbery

HANDBALL-LIKE games have originated in several places at different times. Hieroglyphs in the temple of Osiris in Egypt portray priests taking part in a game similar to handball. Civilizations in South and Central America had a form of handball game, which was a big part of their culture in pre-Columbian times.

Handball was played in pre-Christian times in Ireland, when it was part of the Tailteann Games. At that time, it was played by tossing the ball from one person to another and the presence of people from Spain, France and Greece helped to spread the game to those countries. It is recorded that it featured in the first Olympic Games held by the Greeks and the modern game of Olympic handball is probably based on it. The Irish version changed over the years.

The modern game of handball originated in Ireland and Scotland. The earliest written record of a handball game can be found in the Statutes of Galway which, in 1527, forbade the playing of ball games against the walls of the town. Galway had many trading links with Spain, especially the Basque regions, where a similar game of Pelota is played. It is likely that one game is derived from, or influenced by, the other.

Irish immigrants brought the game to many countries in the 18th, 19th and 20th centuries. Although often regarded as the least important of the GAA sports, it is in fact the only true international sport promoted by the association. It is played in the USA, Canada, Mexico, Puerto Rica, Australia, New Zealand, Wales and England, as well as emerging countries like Holland, Italy, Belgium, Argentina and India.  A world championship now takes place every four years with representatives of all ages, male and female, taking part.

It was said that handball was once the most popular sport in Ireland before it began to disappear in most places in the 19th century. Challenges for side-bets, often extremely large, were frequently held and the top handballers were known country-wide. During the 19th century the game was rarely reported in the newspapers and lost much of its former appeal. While most towns contained some kind of handball alley, which was often the only sporting facility in the parish or village and a meeting place for the young men of the area, when the  GAA arrived in 1884 little effort was made by the infant association to promote the game and it died out in many areas as  athletics, football and hurling took prominence.

It wasn’t until 1923 that the GAA became officially involved in the sport and in that year, they oversaw the establishment of provincial handball councils. In 1924 the Irish Handball Council was established, an independent body intended to promote the game but remaining part of the GAA. In 1925 the first All-Ireland championships were held.

The game included different-sized alleys and different types of ball, hard and soft. The traditional Irish game was hardball and 60 x 30, while the international game is 40 x 20 and softball. In America, the smaller court gained favour, 40 x 20, and this court was fully enclosed, the roof being used as a fifth wall. Having a roof meant the game could be played in all kinds of weather. It is now the most popular of the handball codes in Ireland. 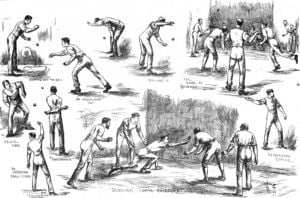 The fastest-growing code is the one-wall game, now being played in over 33 countries. Despite being a small nation, Ireland is one of the elite handball countries in the world, boasting numerous world champions in the men’s and women’s game.

Here in West Cork handball was played mostly in the towns and large villages and very often the alley was attached to a drinking establishment. It was up to the owner to maintain the alleys and this resulted in many of them being in very poor condition. The Catholic Young Men’s Society also took an interest in the game and built alleys onto their premises. These were much better maintained.

Just as it affected all sporting activities in Ireland, the Great Hunger of 1845-1847 resulted in the near extinction of the game of handball. When the GAA arrived in 1884, it decided to include handball in its group of Gaelic activities that needed reviving but, strangely, the ancient game of road bowling was not included in the list.

Despite the supremacy of the imported sports of cricket and rugby, and later, hockey and soccer, in the garrison towns, the game of handball clung to existence in the towns. Skibbereen, in particular, seems to have produced some very good handballers at the time of the founding of the GAA and Rosscarbery also had a strong handball presence.

In 1889 the Rosscarbery GAA Club staged what was billed as ‘the double handball championship of West Cork,’ the first of its kind ever held in West Cork. The prize was a solid silver medal. The players who took part were mostly from Ross and Skibbereen. The event took three Sundays to complete and among those taking part were Con Hurley, baker, and his son (Skibbereen), Pat Driscoll and Tim Leary (Skibbereen), John Hurley and Tim McCarthy (Skibb), W. Finn and T. Casey (Rosscarbery), P. Deasy and Shears (Ross), M. Hubbert and T. Donoghue (Ross), M. Hayes and C. Fitz (Ross).

The tournament was opened by the very same men who had played in the first-ever official football match under the Gaelic rules played in West Cork in late 1887, Rosscarbery v Skibbereen. The final, on the third Sunday, 3rd August, came down to P. Driscoll and T. Leary (Skibb) against W. Finn and T. Casey (Ross). Skibb won the first two games, Ross took the third but then the contest was adjourned for some reason until August 17th when the medals, made by J.F. O’Crowley of Cork, would be presented but, unfortunately, there is no report available of what actually transpired  on the 17th, or who the doubles champions of West Cork were in 1889.