Wayne O'Sullivan in action for Adrigole against Erins Own in the 2007 county intermediate football championship clash in Ballineen in 2007.

WAYNE O’Sullivan admits swapping London for Adrigole in 2007 was a culture shock. It wasn’t just the contrast in views, but also the difference in attitudes.

The former Arsenal trainee was coming from a professional football background in England to an amateur, rural Beara GAA club campaigning at intermediate level.

‘It was refreshing, there were no big-time Charlies walking around, thinking they were it, and there was no-one thinking they were better than anyone else. There were friends, relations, and they were there because that’s their parish, they love the game and they love to play it,’ O’Sullivan (35) tells The Southern Star from his home in Northolt in London.

He only played one season for Adrigole – but he loved every minute of it. He left an impression, too.

John Crowley was the Adrigole manager in 2007, the season after the club won the Cork junior football title, and he was impressed by their London import who had very strong local links.

‘Wayne was a very good footballer, a very good corner forward, he was very fast, not afraid to get stuck in and for a fella who came with a soccer background he had great Gaelic skills,’ Crowley says.

‘In a place like Adrigole where every player counts, he was welcomed with open arms.’

That’s the warm embrace that O’Sullivan also remembers – but how exactly did a former Arsenal trainee, who was in the same group as Seb Larsson and Justin Hoyte at the Gunners, end up playing one season with Adrigole GAA Club?

‘My dad, Patrick, is from Adrigole,’ O’Sullivan explains, ‘and so are my grandparents. They were born there, went to school there, grew up there.

His family then moved to Portlaoise before settling in Kilburn, London, when he was four years old. That became home and while his trips to Adrigole were rare, his father has a farm in Drimoleague and was back and forth between London and West Cork.

In fact, it was his dad that brokered the deal, which was made possible thanks to the hard work of current Adrigole GAA Vice President Tadhg O’Sullivan, that saw O’Sullivan swap the concrete high-rise sights of London for the sweeping views of Adrigole, looking out towards Hungry Hill and the dramatic Beara Peninsula.

At the end of the 2005/06 campaign, O’Sullivan finished up with Newport County after one season there. He headed back to London and got involved again with St Kiernans GAA Club. In fact, he actually played GAA before focusing on football.

‘When I was young my dad found a local GAA club, St Kiernans, so he’d take me and a few friends to training and then he got involved himself with the club, training underage teams,’ O’Sullivan explains.

‘I played with St Kiernans from when I was nine years old until I was 13 or 14. By then I was playing full-time with Arsenal and we were training pretty much every day so I had to knock Gaelic on the head until I was in my early 20s.’

‘You have people who play semi-pro or professional football and it’s about picking up a wage or trying to get a bigger contract somewhere else, but when I started out at St Kiernans the trainers taught us from the beginning about the importance of playing for your local GAA club and what that means,’ O’Sullivan says. Those lessons stuck with him.

In the summer of 2006, after swapping Arsenal for Plymouth Argyle in 2002 (having been a trainee at the Gunners) and then having stints with Exeter City and Newport, O’Sullivan returned to his GAA roots and was back in St Kiernans colours. That opened another door.

‘I managed to get on the London football team for the national league and All-Ireland championship that year,’ he explains.

‘I played with London until we got knocked out of the championship, we played teams like Mayo, Clare, Limerick, and I thought I did alright.

‘I also thought if there was an opportunity to go to Ireland and play Gaelic football, then maybe that was the way forward.

‘At that time in football, I was getting signed by managers, they promised me all sorts, then they’d leave or go to a different club, a new manager would come in, shake things up and I would be the unlucky one.’

Around the same time, his father, still back and forth between London and West Cork, engineered Wayne’s move to Adrigole GAA Club.

‘I remember the first time I played in Adrigole and I could see the mountains and I thought, “this is a bit strange!” It’s a lot different to seeing high-rise flats and concrete everywhere like in London,’ he says.

They were new surroundings but he settled fast. 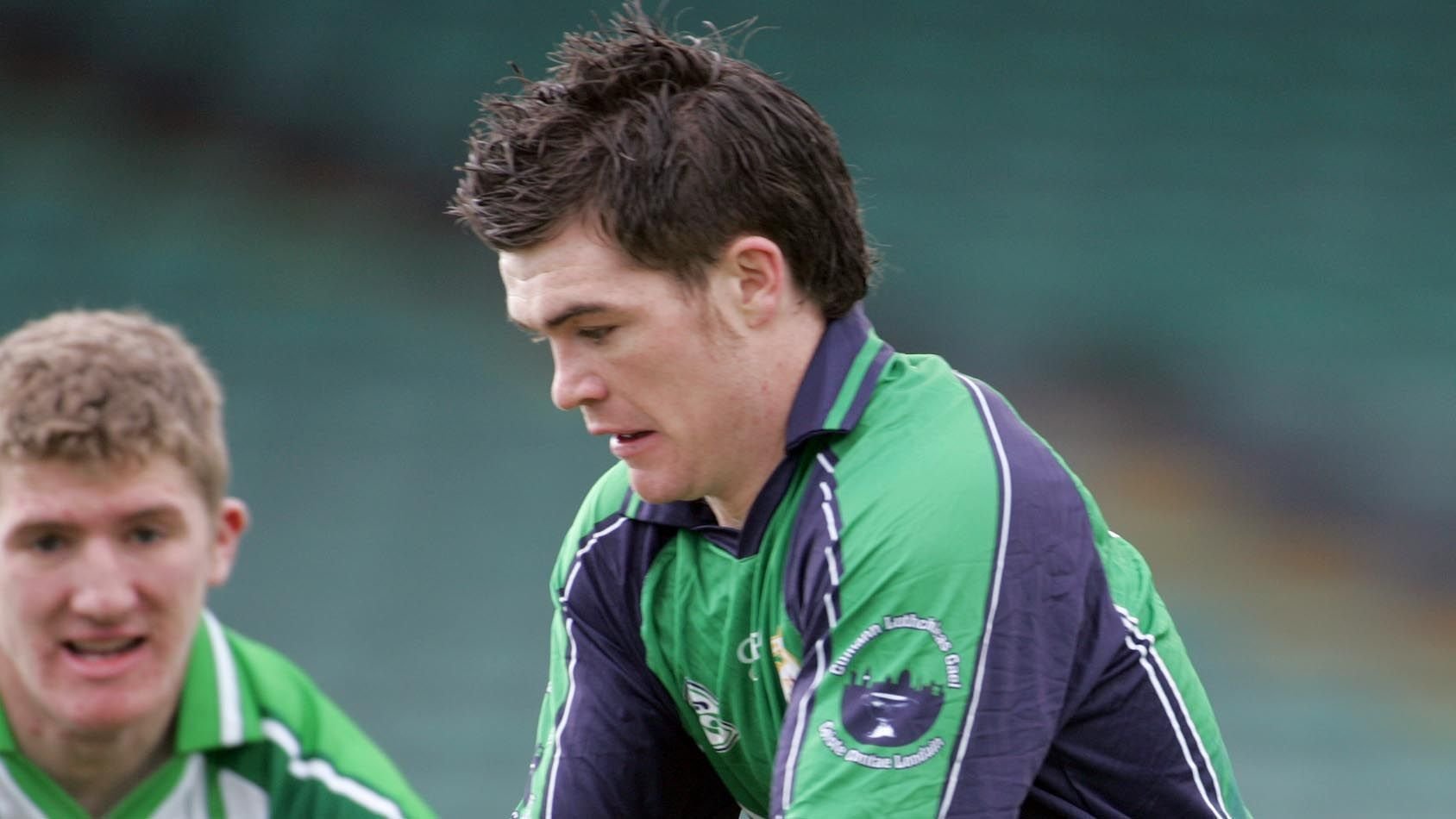 Wayne O'Sullivan in action for London against Limerick in the 2006 National Football League.

Not surprising, given he was born in London, moved back there when he was four years old and grew up in the English capital, O’Sullivan has an English accent – but during one game for Adrigole, a Cork referee thought he was a West Cork local trying to make fun of him.

‘I got blown for a foul. I asked the referee what it was for, he said something back and I said I still don’t know what the free is for. Then he said he’d book me for being cheeky!’ O’Sullivan says.

‘I worked it out afterwards that he didn’t realise I was reared in London and that I was talking in my accent. He thought I was putting on an accent.’

O’Sullivan’s football did all the talking that was needed. Adrigole played him at full forward. He had speed to burn.

‘I wasn’t too bad in front of the goal, but accuracy kicking points wasn’t my strong point,’ he concedes now, but he did enough at Adrigole to impress Beara selectors and was called into the panel for their Cork senior football championship derby against Carbery in May 2007.

He came on as a sub for Lorcan Harrington, but a wasteful Beara, who shot 15 wides, lost 1-7 to 0-8 against their divisional rivals.

‘Playing for Beara was a big thing,’ O’Sullivan says.

‘I didn’t know too much about how the championship works before I came, but my dad explained it all, how it’s the small parishes joining together.’

O’Sullivan also started for Adrigole in their intermediate championship matches – the 1-16 to 0-3 win against Erins Own in Ballineen in April 2007, followed by the third-round loss to Macroom, 0-9 to 0-8, in Inchegeela.

He was travelling back and over from England to West Cork for matches because he was also playing in attack for a semi-professional local football club in London, Hendon FC, as well as working for his father’s company, POS Rail Services.

‘It was hectic at the beginning, I’d play on the Saturday for Hendon and then fly over to Ireland to play for Adrigole on the Sunday. I did leave the soccer alone when we got further into the championship,’ he explains.

His form at Hendon was impressive and he finished his first season as Hendon’s Players' Player of the Year. An impressive goal return (22) saw Stevenage Borough sign him in January 2008 on a 18-month deal. That ended his hopes of returning to Adrigole for a second season.

‘The plan was to come back,’ he says.

‘But Stevenage Borough picked me up, they were full time, and that meant I was contracted to them so I couldn’t play Gaelic and I couldn’t go back to Adrigole.’

The move to Stevenage didn’t work out. A new manager arrived in the summer of 2008 and O’Sullivan wasn’t part of the new plans. They shook hands and he left the club.

These days, he’s married to Tania, they have three kids – Riley (8), Teddy (5) and Nellie (4) – and GAA is a big part of their lives. His two sons play football and hurling locally, and they’ve learned that their dad is one of the rare few who was reared in London, played soccer professionally and who also played GAA in Ireland.

‘I wanted to play at the highest level I could at whatever I did,’ he says.

‘When I was with Adrigole, I thought I handled myself well. I didn’t get much of an opportunity at senior level because we were beaten in the first game. I’d love if I had played more for Adrigole and Beara, but it didn’t work out that way.’

But he’ll always have that one season with Adrigole.