TEARS of joy flowed from Hannah Looney after John Dermody blew his whistle for the last time at Croke Park last Sunday week.

Cork had just gotten over the line by a point against Kilkenny, as they had done so many times in previous finals but in that moment, this semi-final victory felt just as good.

Looney has always worn her heart on her sleeve but it was striking to see her so emotional about reaching the decider. The ladies’ footballers had lost their semi-final to subsequent awe-inspiring champions Meath, but to Cork, and someone like Looney, who was six years into her senior career before failing to reach an All-Ireland senior final, a three-year absence seems an eternity.

As a pure athlete with a strong physical presence and a good skill level, involving the Killeagh woman in the play as often is just sensible.

Initially a carrying attacker, Paudie used her in the rampaging half-back role, a few years before Kyle Hayes made it popularly and in a similar manner now illustrated by teammate Saoirse McCarthy, another converted forward.

Midfield had been a problem in recent years though and after trying countless pairings, Cork found chemistry in Looney and Ashling Thompson, who is approaching her best form once more this term.

Looney had a crucial role in Linda Collins’ injury-time winner against the Cats. It was she who won possession back after the sliotar had slipped from Grace Walsh’s grasp from Amy Lee’s free, drawing four wasp-like black and ambers to the honey of the ball before offloading a perfectly-weighted hand-pass to the supporting Fiona Keating.

The rest is history as Keating, completing her part in a game drill they have worked on so often in training, found her Courcey Rovers clubmate. Collins was the hero, but without Looney doing the heavy lifting, we could have a different result.

‘We were just glad to come out of it but oh my God, what a game. The buzz was unbelievable when Linda sent that point over.’

Collins is the captain and had been left out of the side. The reaction of her teammates, while a natural one for any match-winner, spoke of a real bond.

Looney reckons that a significant reason for what she considers an increased camaraderie this season is the impact of Covid-19 on the potential for socialising as the squad went through a major transition and a number of young players were introduced.

Looney points to the reaction to Mary O’Connell’s third-quarter goal in the semi-final, and the Kilkenny whirlwind it prompted as a four-point lead turned into a two-point deficit with the clock ticking down.

‘It says a lot of the character in the squad and how united we are now, how much we will fight now. I think if that would have happened to us last year we would have collapsed maybe.

‘When I think of it, I would barely have spoken to Fiona Keating and Ciara O’Sullivan last year and Covid would have been the main reason for that. But this year, we can go for a coffee, or have a chat and get to know one another, and I think you can see that now in how we are playing and working for one another.

‘Everyone was smiling, everyone was buzzing to be here, to be a part of it, to be playing for Cork Camogie. There’s such a great energy around the place that mightn’t have been there the last year or two.

‘Now, everyone would do that extra bit and that’s a key bit. In the past as players, we have gone out as individuals. We have been criticised for that over the past year or two. That’s out the window. It’s all about the team. It’s all about Cork Camogie.

‘There’s something special there. It will mean nothing if we don’t get over the line (against Galway) but it was a big monkey off the back getting over Kilkenny.’ 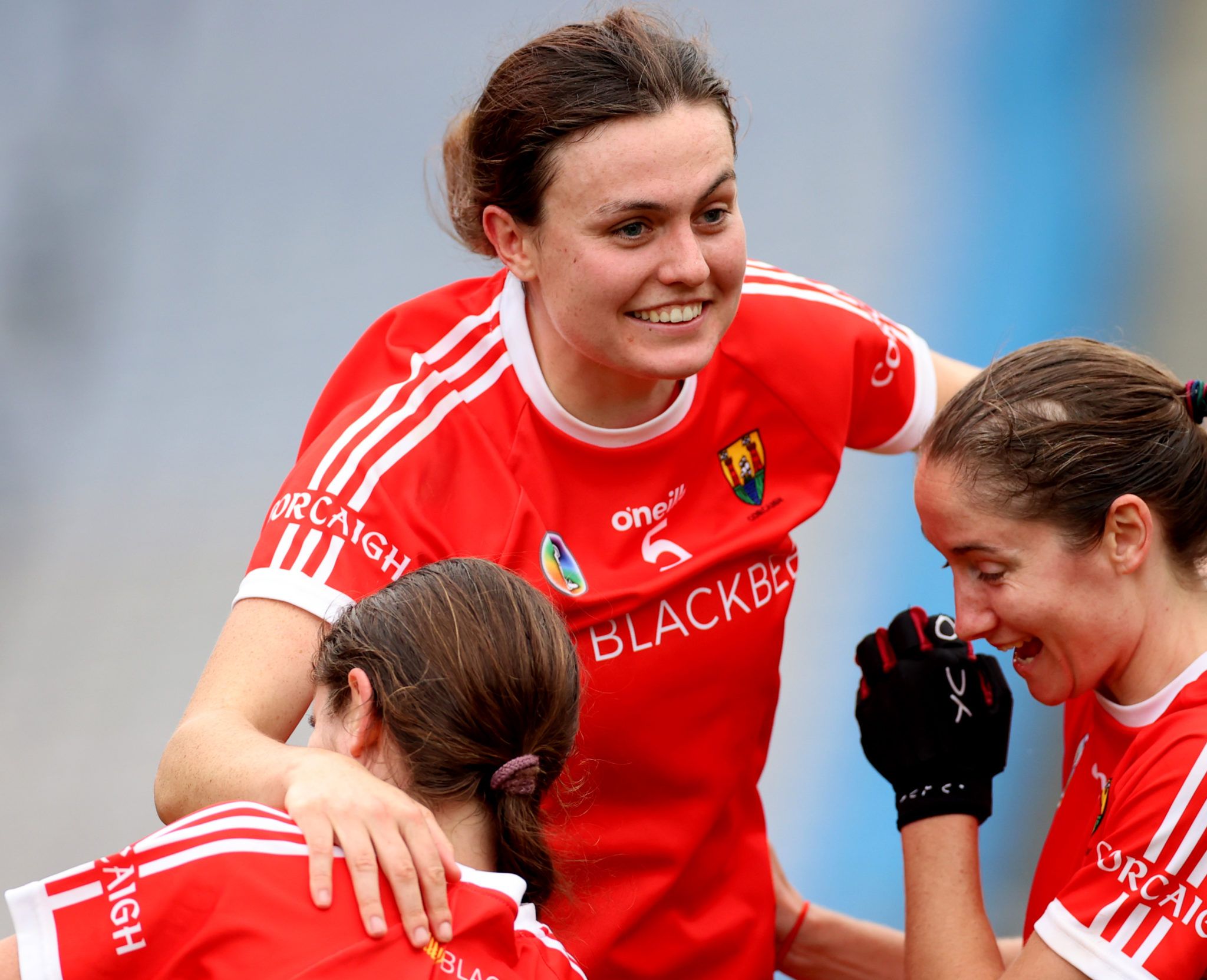 She plays down the significance of her own mammoth contribution but admits to enjoying being right in the mixer, taking hits and giving them, as the game of camogie catches up with the professionalism of the players.

‘The refereeing was brilliant. There was some real good physical action, shoulders, and he was letting it go and players were just getting on with it. Two years ago it would have been about who had the best freetaker but it was a much more enjoyable game to play in as a result of it being let go more and I would imagine it was more enjoyable to watch too.

‘When I went back wing-back first it was something new for me and Saoirse McCarthy has been flying there all year now, and she was brilliant against Kilkenny. But I really do enjoy playing at midfield and being involved in the play more, trying to get on ball and link the play and just be involved as much as possible.

‘I think myself and Ashling complement each other well, we work well together and hopefully that will continue to be the case.’

The 24-year-old chemical engineer in Carlow MSD lives in Kilkenny, which means she may have had to keep the head down a bit in the last fortnight, but she is enjoying the build-up, admitting that she missed it.

‘If I’m looking back, particularly with the camogie, I wonder did I take it for granted. I joined the panel in 2014 and I was in All-Ireland finals straight through until 2019. There’s something extra special about this one now because of the last two years. So I will relish it, I will take it all in.

‘But at the same time you can’t get carried away with the occasion. There’s still a job to do.’

‘I always have such a soft spot for Killeagh Camogie, especially as I’m not actually from Killeagh, I’m from Aghada and I joined them when I was 11 or 12. They’ve been my biggest supporters ever since. There’ll be some buzz now with the three of us going up and we hope now that we go out there and do Killeagh Camogie proud.’

The final pairing is a repeat of the tumultuous semi-final of 2019, one of the great games of the modern era, where Galway got over the line by a point before claiming their third All-Ireland title.

After last year’s quarter-final defeat of Clare, Looney spoke of how they felt they were outworked that day. That is something they have emphasised but what really stood out against Kilkenny was how often they were able to maintain possession, create space and overlaps in wide positions, while also mixing it up with the direct ball on occasion to Amy O’Connor and Katrina Mackey having worked it to the appropriate position. It was evident how suited they were to Croke Park and a dry sod.

‘That’s a testament to the work we have been doing in training. I must say, I was a little bit nervous beforehand. It’s hard to know from training, you’re wondering, ‘Are we really going as well as I think we are?’ And we hadn’t played in a while. But within ten minutes, we knew it was. We worked really hard and you could feel it coming together but to do it then on the day in Croke Park was great.

‘We will always focus on our game primarily but obviously Galway are a brilliant team with brilliant hurlers. At times that has nearly been their problem, trying to work out what 15 to pick, they have such a strong squad and skill in that camp. They’ve a different style to Kilkenny so it’ll take a bit of prep to get that right.

‘We know it is going to be a very tough game, where we’ll need everything, and we will need to work because they will. I think we have shown we have that but we have to show it again.

‘They beat us in the League semi as well (in extra time) but I think we’ve learned a lot from that. It’s going to be another titanic battle and we just hope we’ll be getting over the line.’

Tickets for Sunday’s All-Ireland Final triple header can be purchased at ticketmaster.ie.