JOE O’Neill didn’t mind heading back to work last Monday morning after his week off.

In fact, he was looking forward to it – and with good reason.

On the opposite side of the country, at Donegal Golf Club on the Murvagh peninsula, Berehaven’s heroic band of brothers produced the goods two days in a row to be crowned the 2020 AIG Jimmy Bruen Shield champions.

This is the first national title in the history of this nine-hole golf club tucked away in the Beara Peninsula.

‘Normally, a person would be dreading going to back to work after being off, but I was delighted,’ explained Joe O’Neill.

A college student in Tralee, he works part-time at Murphy’s SuperValu in Castletownbere and as soon as the doors opened on Monday, the well-wishers popped in to congratulate O’Neill and everyone involved in this team effort.

From fishermen to postmen to builders to O’Neill’s boss at SuperValu, Chris Downey, the Berehaven team pulls from all facets of the local community. This is a close-knit group. There’s a bond there. That shows on the course.

‘I’ve been asked since we won the title last Thursday what makes this group so special, and the answer is we are all from Beara, we are all Beara men and we are playing for our local club,’ O’Neill explains. 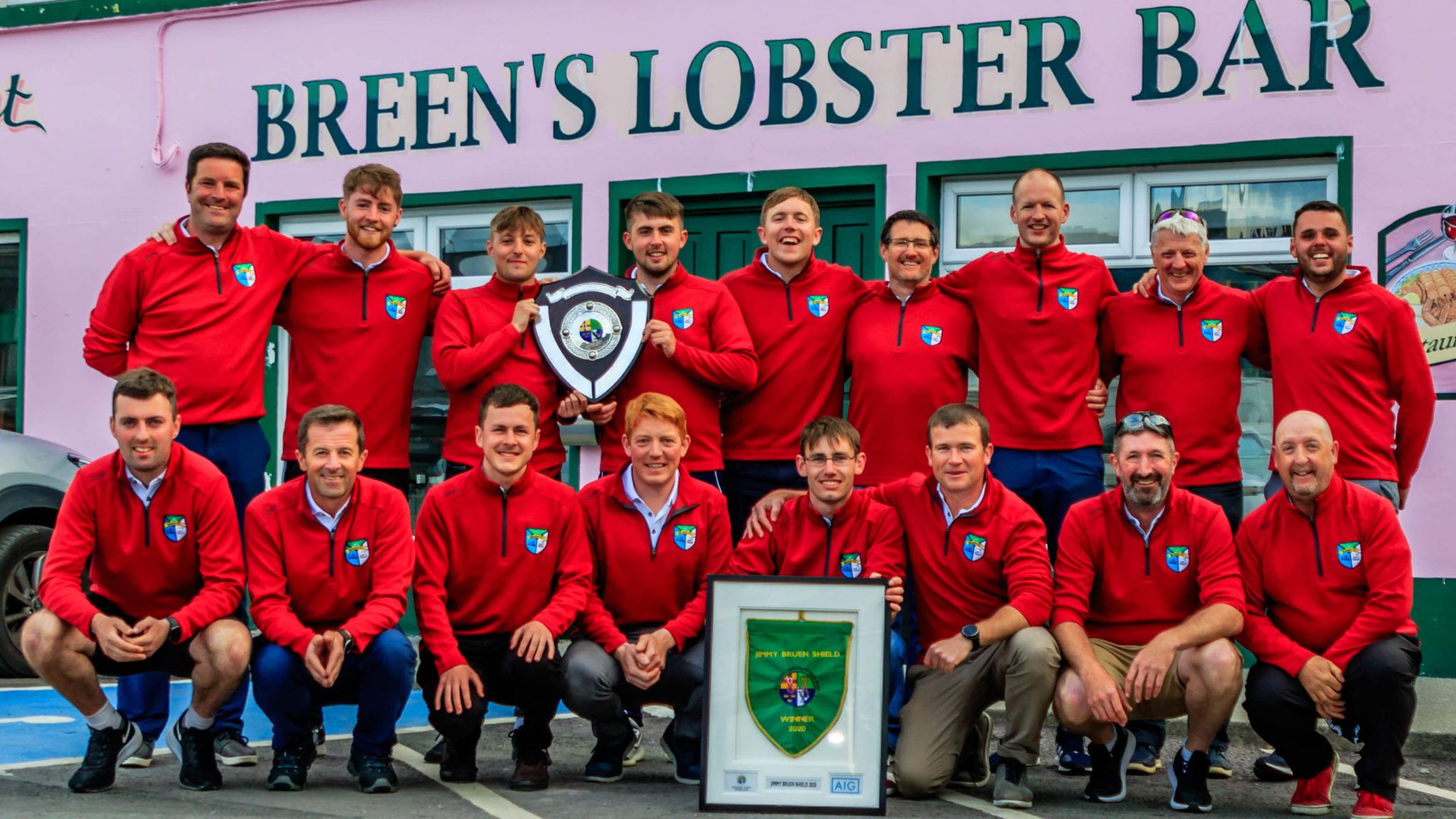 The first pairing out in the 2020 Jimmy Bruen Shield final against Baltinglass were brothers-in-law, Seamus Spencer and Brendan O’Driscoll – and they got the ball rolling with a 5&3 win.

Spencer would be known for his past football exploits with Castletownbere, but he has that touch of class with the small ball too, and the cross-over between the all-conquering Berehaven GC team and Castletown’s footballers is a new take on dual stars. A side note, on Saturday night, two days after they helped Berehaven to the historic 3.5-1.5 win over Baltinglass in the 2020 Jimmy Bruen Shield final in Donegal, five of that team played for Castletown in their win against Carbery Rangers in the Tom Creedon Cup.

As well as Joe O’Neill, Lorcan Harrington, James Harrington, Richard Murphy and Declan Dunne all lined out for Castletown, and Dunne played a central role in Berehaven’s triumph, too. On the 16th green in Donegal the pairing of Dunne and Luke O’Sullivan secured a 4&2 win over Baltinglass duo Fergal Doogue and Nathan Gerraghty – and that was the crucial point that secured victory.

‘You cannot imagine how good it feels. It’s the best moment of my life,’ Dunne said in the moments after the victory.

That feeling of euphoria was shared by everyone involved in the Berehaven team, the entire club and all its members, family, friends and the local community.

‘It was the best feeling I ever had in my life,’ Joe O’Neill says.

‘I was running around the golf course on Thursday, keeping track on the games that were going on, and when we won it was pure relief. I was so delighted for the lads, they’ve worked so hard for this. It’s a special achievement for a special group. This means everything to the club.’

The pairing of Declan Dunne and Luke O’Sullivan were also to the fore in the 3.5-1.5 semi-final win over Ballinasloe the previous day (Wednesday), as Berehaven booked their place in the club’s first national final. One step closer to glory.

The seeds for this particular triumph were sown last year though, and can be traced back to Berehaven’s victory in the Munster final of the AIG Jimmy Bruen Shield in October in Killarney. There, in Heaven’s Reflex and on the famed Mahony’s Point course, Berehaven defeated Shannon 3-2 to win the club’s first Munster pennant.

‘That was a stepping stone for what happened in Donegal. It showed the lads that it was possible,’ Joe O’Neill says.

Club chairman Kevin O’Shiel was in Killarney that day, too, and felt that something special was in the air.

‘That was one of the best days I have had on a golf course. To see the team pull together, they were so determined. They have the ability and the talent, but they also have the grit that you need,’ O’Shiel says, before offering his thought’s on the club’s All-Ireland success.

‘We have never achieved anything on this scale, we have won a few Pierce Purcells, but this is a different level, this is an All-Ireland title. It’s a phenomenal achievement.’ 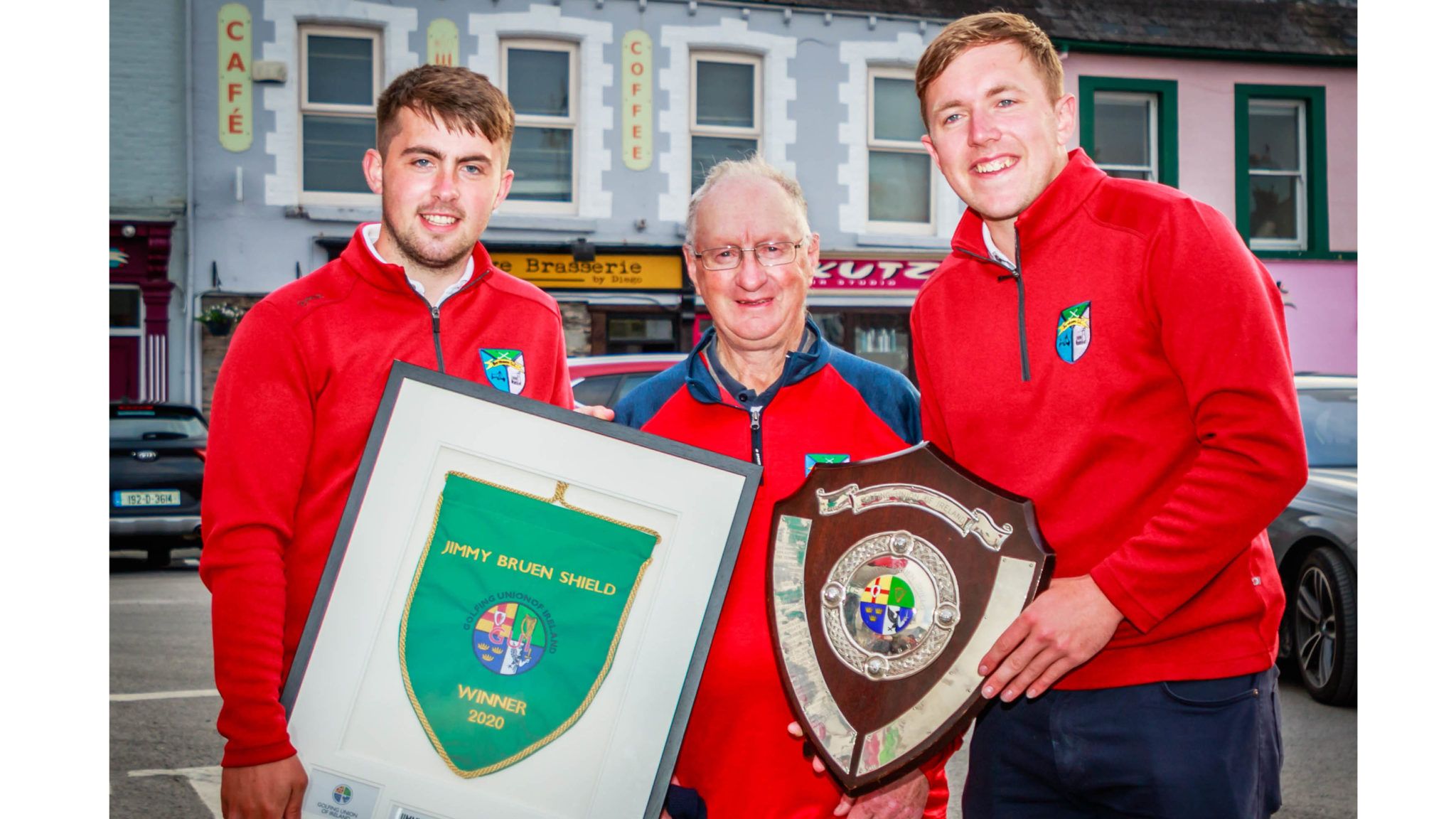 Berehaven golfers Luke O'Sullivan and Declan Dunne pictured with Timmy Lynch, centre, who taught them how to play golf.

Nineteen team members made the long trip north to Donegal last week for the semi-final and final. It’s six hours travelling in a car without a stop.

‘It was going to be a very long journey to come back down the road with nothing. We were the club that travelled the longest distance. Not only were we going in there as underdogs from a small club, but we had to travel the most too,’ Joe O’Neill says, but Berehaven’s golfers jumped every obstacle put in their way.

In the final against Baltinglass, here are the results that created the already-legendary 3.5 to 1.5 win.

The homecoming on Friday was special and a fitting hero’s welcome as Beara pulled out all the stops to salute its All-Ireland champions. There was a Garda escort in Castletownbere when the cavalcade arrived into town.

‘It was a brilliant weekend, a really nice atmosphere and it was great to see all our families and friends turn out,’ O’Neill says.

In a land known for its football tradition, it’s Beara’s golfers who are in the headlines this week, and their triumph will leave a legacy. On Saturday morning, there were 45 kids at Berehaven GC enjoying their golf lessons. The club’s hard work over the year has reaped its reward.

‘For a small nine-hole course in West Cork, this means everything,’ O’Neill adds.

‘It was a mind-blowing experience for all of us and we’ll never forget it.’ No-one involved in this incredible fairy tale will forget this either, how a small West Cork golf club won a prestigious national title.