JAMES McCarthy admits he is wary of Éire Óg in Saturday’s top-of the-table Premier SFC Group B clash in Enniskeane – but the Castlehaven boss is backing his charges to make their experience count.

Both Castlehaven and Éire Óg won their group openers earlier this month with victories against Newcestown and Carbery Rangers respectively, so both teams also know another win will push them closer to the knock-out stages.

This is an intriguing match-up on many levels as it pits a seasoned senior heavyweight (Castlehaven) against the new kids on the block (Éire Óg) with the latter taking the scalp of Carbery Rangers in their opening game. That was also the Mid Cork team’s first-ever match at this level, having won promotion during the summer, but they looked right at home – and it will have made the rest of the teams in the group sit up and take notice.

‘Éire Óg are a team on the way up, they have momentum behind them and they have a lot of players with Cork experience at the various levels so they will bring a ball of energy, skill and speed,’ McCarthy says.

‘They will be really up for the challenge of playing Castlehaven. They wanted to be at this level, challenging the Nemos, the Barrs and the Castlehavens, and they are there now.’

Before a ball was kicked in the championship McCarthy tipped Éire Óg to take a few scalps and now he wants to make sure his team isn’t surprised on Saturday in Enniskeane (2pm throw-in). His Castlehaven team is an experienced outfit, though. They contested the delayed 2020 Premier SFC final just four weeks ago, losing to Nemo. They’ve been there, done that, and they’ll lean on that know-how to try and keep Éire Óg at bay.

‘This group is gelling. Take the county final result out, we are growing in confidence,’ Haven boss McCarthy says.

‘We need to produce it every day we go out because we know we are there to be taken down. We respect every team and we are wary of Éire Óg so we won’t take our eye off the ball.’ 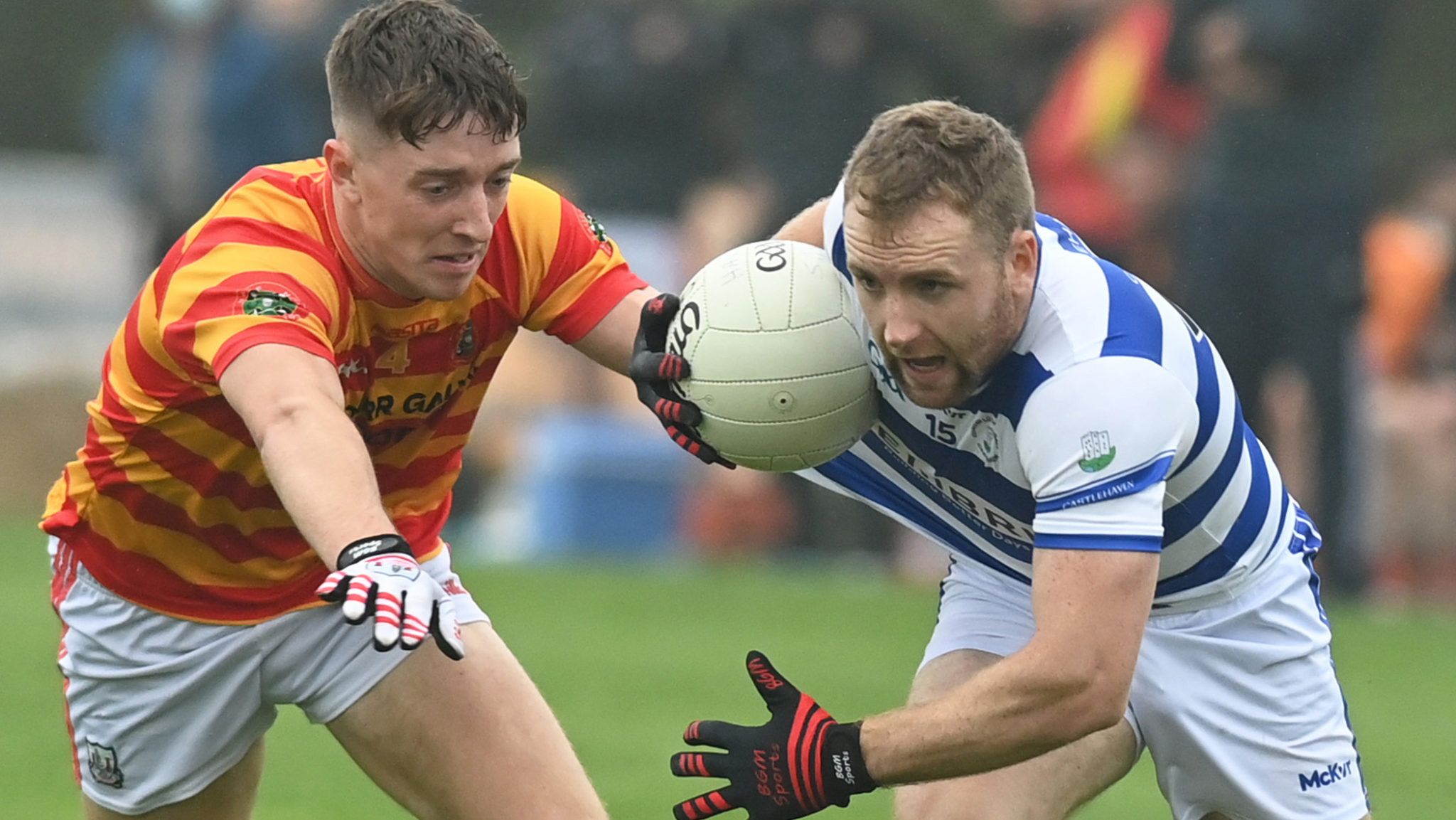 Castlehaven’s Michael Hurley is tackled by Newcestown’s Colm O’Donovan when they met in their 2021 Cork Premier SFC opener.

Castlehaven have that experienced core to call on. Mark Collins. Brian Hurley. Anthony Seymour. John O’Regan. Roland Whelton. Damien Cahalane. Michael Hurley. Conor Cahalane. They’ll need them and more to fire if they want to get back to this season’s final, but James McCarthy liked what he saw from his side in their 2-12 to 1-10 opening group win against Newcestown that came six days after they lost the 2020 final to Nemo Rangers.

‘I was delighted for the lads because they parked that result against Nemo fairly fast and got back to winning ways again. Their attitude was 100 percent. We made mistakes against Newcestown but they had three months to prepare for that game whereas we had six days, but we came through it,’ McCarthy says, and he feels Castlehaven will be even stronger this Saturday.

‘Brian (Hurley) should be back to near 100 percent fitness; he played the last two games at 75 percent,’ he says, while Conor Nolan is back after injury to further strengthen the panel, as Haven look to secure their spot in the knock-out stages as soon as possible.

‘That’s the beauty of the round-robin, you think you are safe if you win one game but you’re not if you lose the second one. It sends you into the last game knowing you could possibly be pulled into the relegation side of it so we are focussed on Saturday and getting the result we want,’ he adds.