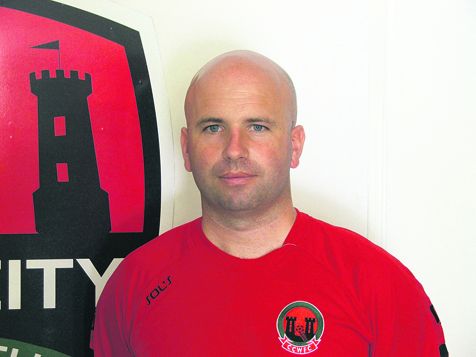 IT’S the best wedding present that Niall O’Regan could have wished for – being named the new manager of the Cork City Women’s FC team.

In mid-June, the Bandon man married Stacey Paul, from Douglas, under the Marbella sun and its inviting blue skies (in the same church Peter Stringer was recently married in).

While in Spain news filtered through to O’Regan that Cork City Women’s FC had a managerial vacancy, and when he showed interest in the position it was an appointment that made sense to both parties involved.

‘It’s a good opportunity for me to develop myself as a manager and it gives me the chance to upskill again and work in a national league environment. I’ve done everything really in the amateur game and it’s about stepping up to national league level,’ the 32-year-old West Cork man told The Southern Star.

An extra week of Spanish sun after the wedding has pushed the honeymoon back, to possibly December, and instead O’Regan was back on the training field last weekend for the first session with Cork City Women’s FC.

These few weeks it’s all about fitness, cardio work, getting his philosophy across to his new players before a host of friendlies in August ahead of the national league kick-off on September 5th.

These are busy times indeed for one of the country’s top young managers, who holds a UEFA A license and whose soccer CV is extremely impressive. His track record is second to none, in both the female and male game. With his native Bandon, O’Regan masterminded the men’s promotion from Division 2 to the Premier Division of the Munster Senior League within three seasons, while the Bandon ladies won league and cup doubles during his reign.

O’Regan sets high standards, and the same applies to Cork City Women’s FC – he has targetted a title triumph within two seasons.

‘We have set a target of finishing in the top three this season. It’s important to be ambitious,’ O’Regan confirmed.

‘The last few years the team finished bottom of the league so people might say we are being overly ambitious, but I don’t think so – not with the players that are there.

‘I remember going into Bandon five or six years ago when they had been bottom of the Munster Senior League Division 2 for two years.

‘We went in there, with the management team that I have, put structures in place, got the players fit and organised, and it worked, and within three seasons Bandon were promoted to the Munster Senior League Premier Division for the first time ever. Equally I think we will have the same success with the Cork City Women.’

Key to Cork City’s chances of success, O’Regan points out, will be the calibre of the players that will line out this season.

‘The big thing over the last few years is that Cork have struggled to get players,’ he explained, before adding, ‘I had ten targets and all are signing. You have a number of internationals in that and a number of players who have won major trophies so we will be strong and we will be competitive.’

Among the new brigade, and first to sign up, is midfielder Barbara O’Connell, arguably the most successful player ever in the history of Cork Women’s Soccer League, having won 24 winner’s medals, many as captain of Wilton United.

If it all goes according to plan, this could be the wedding present that keeps on giving, and that also helps this talented Bandon coach to keep climbing up the ladder, while delivering success to Cork City Women’s FC – a win-win situation for all involved.