BEFORE Nicola Tuthill’s dad, Norman, built her a throwing cage on their family farm in Baurleigh, Kilbrittain, the talented teen would practice by throwing the hammer out over the silage pit.

She also used the front lawn as her launching pad, as well as heading down ‘the lane’ – which leads to the farm – and slinging the four-kilogramme hammer into the closest field.

But building the throwing cage and circle on the farm in 2019 was a game-changer.

Now Nicola (17) has her own home-made training facility, completed with fishing netting from Schull. It’s a case of walk out the back door of her home, turn right and she’s at her very own throwing cage.

‘It was my idea and I’m lucky that my parents agreed,’ Nicola says.

It’s a smart move that has already paid off.

During the first lockdown last year, she spent countless hours practicing at home in her own throwing cage, helped remotely by her coaches (Kevin Warner, Roland Korom and Killian Barry) and her parents (Norman and Colette) – and that laid the groundwork for an incredible summer of success when sport resumed. 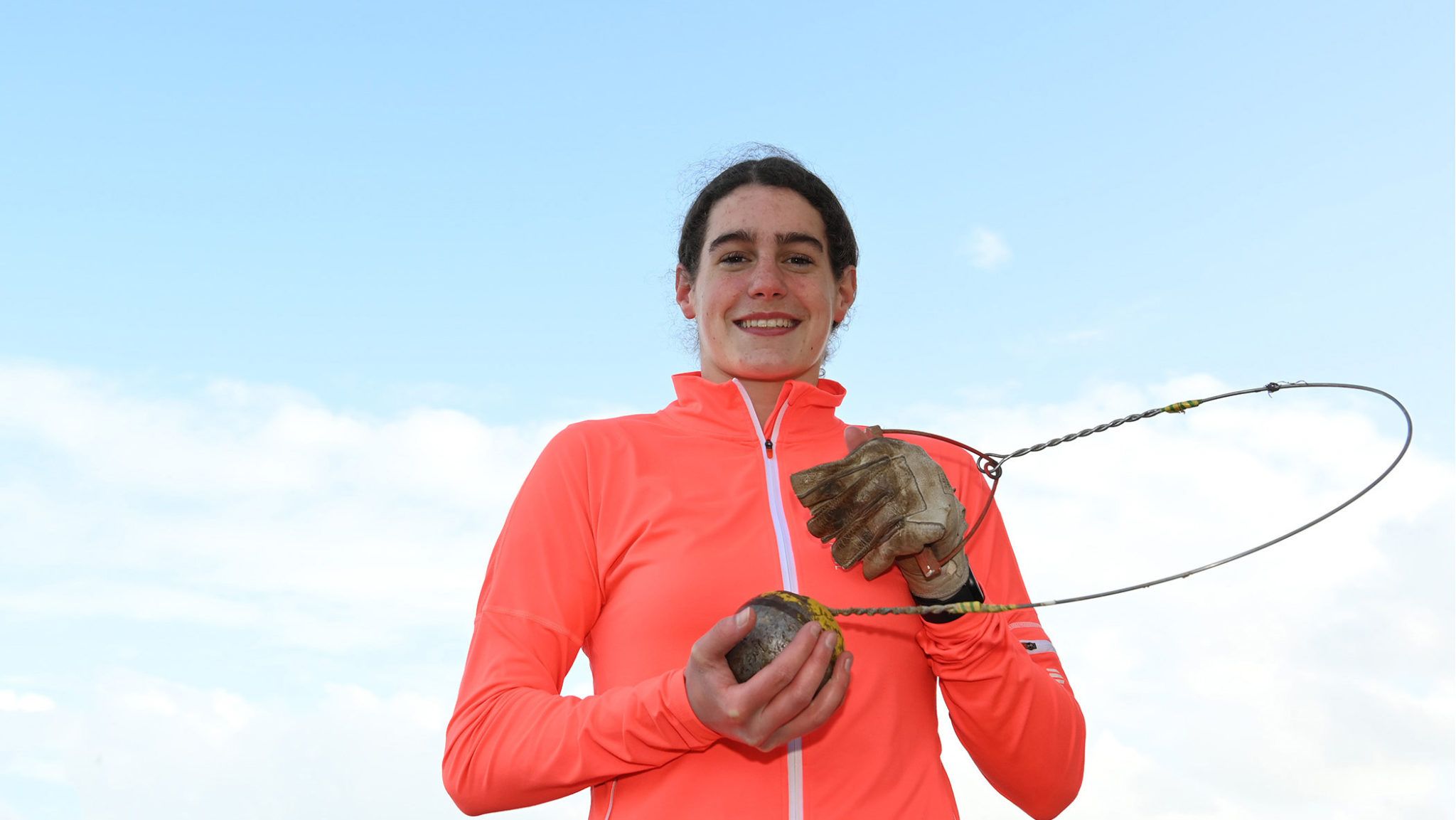 The Coláiste na Toirbhrite student grabbed the headlines in August 2020 when, just 16 years old, she won the senior Irish women’s hammer title with a monstrous throw of 60.04m at the national championships in Santry.

It was an incredible throw, smashing her own Personal Best (PB) by two metres as she became just the sixth Irish woman ever to throw over 60 metres. At that stage of the year only one other U18 athlete in the world had thrown farther.

‘Going up to Dublin that day I was hoping to be in with a chance of a medal,’ the Bandon AC athlete says.

‘My PB would have been within the medals so I thought I might have a chance of  winning a medal, but when I saw what I threw I was delighted.

‘I knew the throw went well and it felt good when I let go of it. I thought it might be close to my PB and I was so happy when I saw the distance.’

Three weeks later she added another national title to her growing collection when she powered to gold in the women’s hammer at the Irish junior championships in Santry. Again, she was a class apart, finishing nine metres ahead of her closest rival.

Nicola’s talent was recognised here at home too when she was named the 2020 Celtic Ross Hotel West Cork Sports Star Junior Award winner – and she’s following in some very famous footsteps. In recent years dual GAA star Fiona Keating, current senior Irish men’s 5000m champion Darragh McElhinney and former world kickboxing champion Lily de la Cour have all won this award. Now, Nicola Tuthill’s name is added to an impressive list, but given that athletics is in her DNA, perhaps it’s not surprising that this Kilbrittain teenager is in a league of her own.

Both her older sister Olivia and younger sister Aoife compete in Bandon AC colours, and at one Courcey AC Sports Day, Nicola and Olivia along with their mom and dad won the family relay.

‘My mom was involved in athletics so my two sisters and myself got involved too. Before I started the hammer I used to run, and I ran at county and Munster levels before I decided to focus on the hammer,’ Nicola explains.

A key event in her success story was a neighbour’s daughter’s Communion.

‘I had an event the next day and I was saying that I was competing in the hammer. My neighbour, Kevin Warner, was there, he told me had thrown the hammer for Ireland and said if I liked he would train me. He has trained me ever since,’ Nicola explains.

During the first lockdown Warner, who lives less than a mile from the Tuthill farm, dropped off weights for Nicola to use in the garage. She was also in constant contact with her other coaches, Roland Korom from Bfit in Bandon and Killian Barry who is based in Dublin. This is a team effort that starts at home.

‘I really appreciate all the support I get from my family,’ she says.

‘My dad built the cage and just added an extra piece last Friday so I can do my drills in the cage instead of in the yard. He fixes the hammers, replaces the netting, frees the hammers if they get stuck in the net. My mom is out with me in every training session, whether it’s raining or snowing, she’s pulling the hammers in and out for me.’ 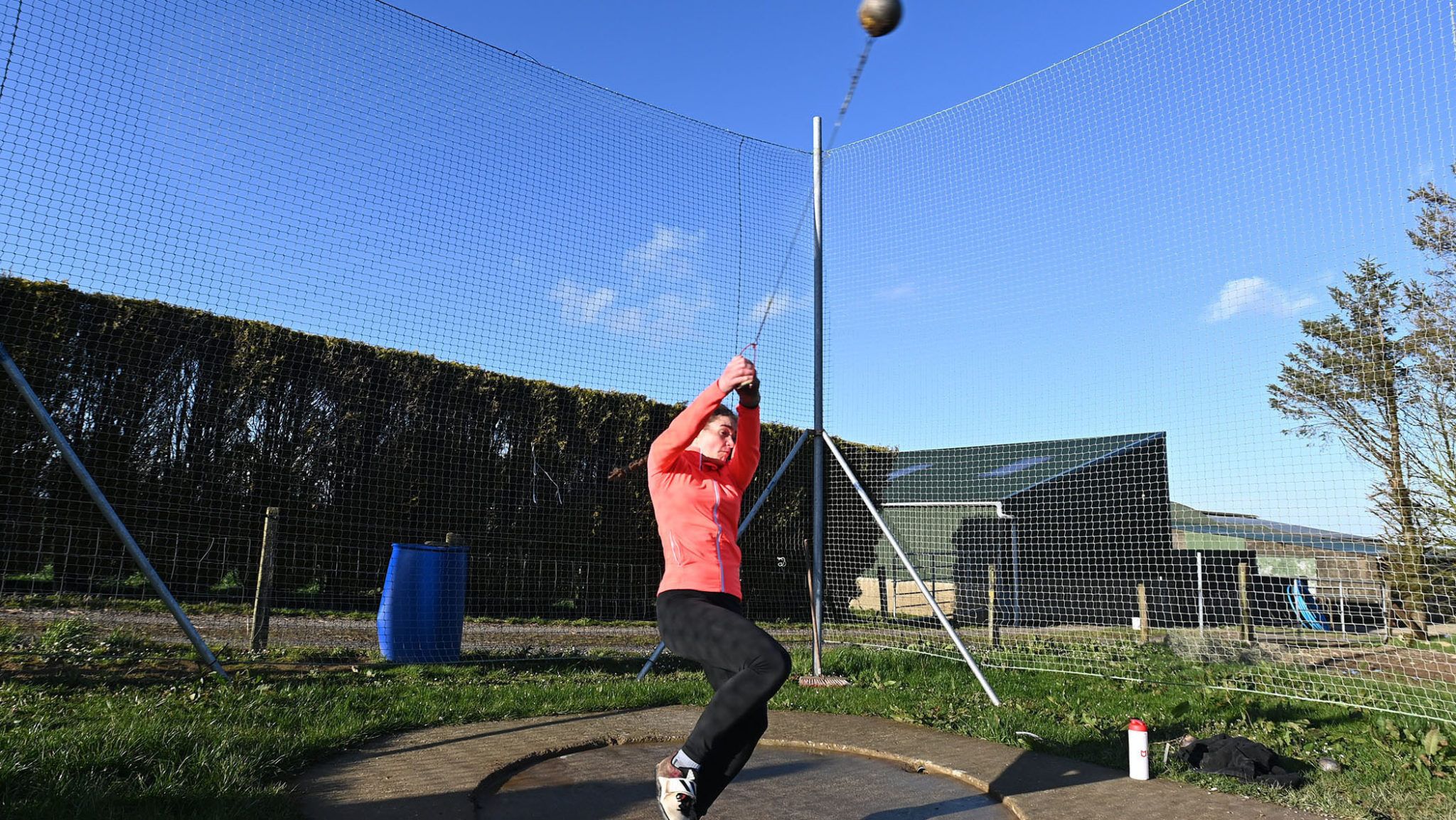 Nicola Tuthill training at home at Baurleigh on the circle and cage built by her father.

Nicola trains six days every week, divided into eight sessions made up of throwing, gym work and sprinting. All that hard work is paying off, but she’s just getting started.

‘I’m only 17 so I’m still learning and there is always something to improve,’ she explains.

‘If you put a toe wrong then the whole throw could go very, very wrong.

‘There’s a technical aspect to the hammer that I find very interesting and it’s so different to what I have done before, like running.

‘Winning the national senior title last year was great. Of course you get confidence from it but you still have to keep the head down and work hard because you don’t know what the next day will bring.’

Nicola is targeting further glory this year when action resumes. She will have her national titles to defend in the summer and there is also the European Athletics U20 Championships in Tallinn, Estonia in July, as well as the 2021 European Throwing Cup in Croatia in May.

‘I always want to do better and I always want to improve. This year I want to get out and compete, improve my PB and hit as many qualifying standards as I can,’ Nicola says – and few would bet against this rising athletics star.

She has come a long way from practicing in the town park in Bandon. Those days, if Nicola got a hammer stuck in the cage there she would have to walk up the road to Oakgrove House B&B to borrow a ladder so she could free the hammer.

‘Because I train at home now, if the hammer gets stuck my dad can just bring up the ladder and get it out for me, rather than travelling all around the place looking for a ladder to help free the hammer from the cage!’ she explains. That’s one of the many advantages of having her own throwing cage and circle right outside her back door.