OVERCOMING obstacles is nothing new for FAI qualified coach Áine O’Donovan as she continues her climb up the international coaching ladder.

Juvenile Idiopathic Arthritis, or JIA, is a condition affecting close to 1,000 young people in this country. Simply put, it is an arthritis that occurs in teenagers and young children.

Playing numerous sports as a child, Áine noticed something was wrong before being diagnosed with JIA at 13 years of age. Whilst restricting her full-contact sporting endeavours, the sports fanatic quickly turned her attention to coaching and hasn’t looked back.

Not content with making a name for herself guiding Bandon AFC’s academy schoolboys and schoolgirls’ squads, Áine has enjoyed success with Cork Schoolgirls Gaynor Cup and Cork City FC’s underage academy and senior set-ups. All that before signing up for the 2021 West Cork Schoolboys League Kennedy Cup coaching team.

It has been a long and sometimes bumpy road but not even a pandemic could halt Áine’s coaching education. Unsurprisingly, she is looking forward to returning to the training pitch as soon as possible.

‘I was first diagnosed with JIA when I was 13 years of age,’ she says.

‘Up to when I was 17, I thought I was the only person with JIA. Then I found out about a charity called ICAN, the Irish Children’s Arthritis Network, who became a second family to me. I knew I wasn’t alone as soon as I reached out to them. There are over 1,000 people in Ireland with JIA so to have that support was huge especially when I was diagnosed so young.’

Nowadays, whenever she isn’t coaching, Áine works closely with the Irish Children’s Arthritis Network (ICAN) as both a mentor and youth panel member.

‘I really enjoy my ICAN roles as I get to help children and teenagers of different ages,’ the FAI qualified coach says.

‘We do a lot of different things for those who are newly diagnosed. I get parents texting me from time to time asking if I can help with their children who might have issues. Whatever it is, I am happy to help as I have already gone through a lot of those experiences.

‘From a physical standpoint, even though I was on crutches for 12 months last year, my JIA has not inhibited my ability to coach. It’s not about being resilient, it’s about finding new ways to deal with challenges.

‘I’m the oldest sibling on both sides of my family and always the babysitter! I have grown up around kids and coached kids in the Bandon School of Excellence with Niall O’Regan (FAI Head of Coach Education). That grew my love of coaching and especially working with children, and my long-term aim is to complete a masters in primary teaching’. 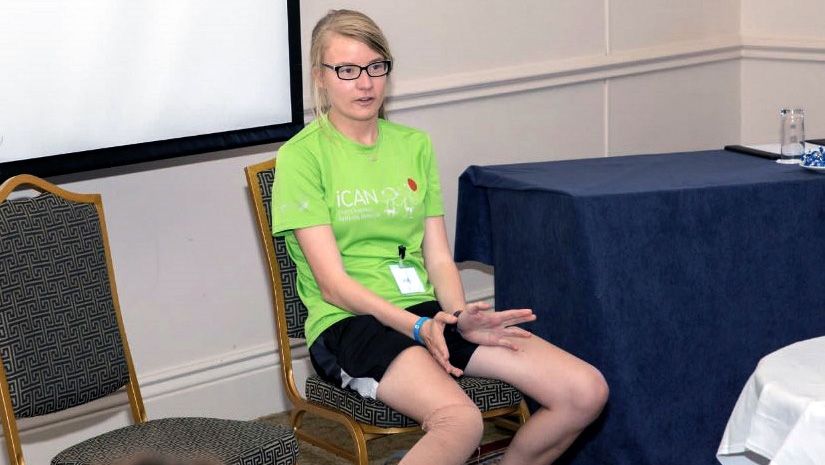 Áine has already obtained her FAI National C coaching and National B goalkeeping licences and is in the process of securing her UEFA B qualification. As with every aspiring coach looking to upskill during the current pandemic, her recent coursework has moved online. That necessary change has made for a new learning experience as she would usually be on a pitch organising a training session.

‘Everything has been delivered electronically since then. That has made things a little harder because, obviously, you don’t have that on-pitch interaction with players and other coaches. You learn something practically but you need to put that knowledge to work and see it work in-person. You’d miss the physical interaction that coaching brings and the instant feedback from your tutor.

‘Having said that, the FAI have been active in delivering their courses online and kept things going in difficult times. Everyone wants to get back out on a pitch. It has been very quiet when, in normal times, I’d sometimes be coaching seven nights a week. Going from that to nothing has been challenging.’

Lisa Fallon was hired as League of Ireland club Galway United’s head coach last week. Fallon is one of the few female Irish coaches to make her mark at the highest level both at home and in the UK. Times are changing however, as a growing number of young female coaches take their FAI badges, something Áine is proud to be associated with.

‘I am completing my UEFA B Licence with between 20 and 30 other female coaches,’ the Bandon AFC coach says.

‘This is a new all-female UEFA B Licence course. There was another UEFA course two years ago so there are a lot of women acquiring qualifications even though I don’t know that many other female coaches in Cork or West Cork.

‘A number of the Republic of Ireland senior international players have joined the B Licence course. There are definitely more women looking to make a career out of coaching soccer which is encouraging. There is an equally large number wishing to upskill and take what they have learned back to their clubs.

‘Coaching has always been a passion of mine since Niall O’Regan first helped me out over ten years ago. I’ll hopefully complete my UEFA B licence and go on to receive additional licences. It is all about improving myself as a coach and a person.’

The start of 2021 was scheduled to be an ultra-busy time for Áine with Bandon AFC, Cork City Women and the WCSL Kennedy Cup squads demanding her time. Covid-19’s intervention may have temporarily altered those plans but the possibility of aiding West Cork’s Kennedy Cup aspirations is something to look forward to later in the year.

‘Getting involved with the West Cork Schoolboys League and Kennedy Cup is a new but welcome challenge,’ Áine explains.

‘I would have worked with Gaynor Cup (schoolgirls inter-league) squads in the past but coaching West Cork is something I am absolutely loving. My experience of working with various Bandon AFC boys teams has helped. Coaching a schoolboys inter-league squad in an elite environment represents another step forward in my coaching career.’