Cathal Maguire's disappointment was evident at the final whistle as Castlehaven bowed out of the Bon Secours Premier SFC.(Photo: George Hatchell)

SO, it’s an all-city final in the Bons Secours Premier Senior Football Championship.

After the semi-final action in Páirc Uí Chaoimh, it’s the final the Barr’s wanted and the final Nemo also wanted. Nemo, in their anniversary year, would take great joy in dethroning their Togher neighbours from their lofty perch of champions. The Barr’s, still on course for the double for the first time since 1982, have never beaten Nemo in a county final. It’s all set up.

The opening semi-final between Ballincollig and Nemo was okay, in terms of standard, but the main event was different gravy altogether. The standard of football in the ongoing Barrs v Castlehaven semi-final saga, which now spans three years in a row, was a grade, at least, above what was on show in the curtain-raiser. The worrying thing for us all is that the Barrs look a better team than they were last year.

Cillian Myers-Murray is taking more of the scoring weight from Steven Sherlock’s shoulders. Brian Hayes is a monster at centre forward. Midfield and defensively, they are really good, and when you can afford to have the likes of Ben O’Connor and Dylan Quinn on the bench, ready and waiting to finish games off, you are in a really good position. In truth, the Barr’s should have been out the gate at halftime.

The match-ups were interesting. As anticipated, Rory Maguire picked up Sherlock while Damien Cahalane tried to put the reins on Hayes. Up the other end Sam Ryan this time picked up Michael Hurley while Brian Hurley started on the 40, being tagged by Jamie Burns. Burns’ influence on the opposition kickout has been huge all season but he had no choice but stay back and mind Brian Hurley on this occasion. On the other hand Burns' physicality was a different proposition for Hurley. Granted, the Haven man got eight points but only three were from play which was a winning outcome for the Barr’s.

The Barr’s butchered four goal-scoring opportunities in the opening half. Myers-Murray shaved the post, Sherlock was too high, Hayes took his too close to the goalkeeper while Burns fisted over before half time when it seemed easier to roll it into the net. The Haven, to their credit, fought hard. Brian Hurley’s brilliant pass to his brother in the second quarter led to Michael billowing the net to put the Castlehaven men in the driving seat following the Barr’s wastefulness. Three points before halftime to bring the sides level and three points after half time put the Barr’s three up, and things were looking ominous.

Castlehaven’s Cathal Maguire then caught fire with three in a row off Billy Hennessy. The Barr’s management reacted quickly, moving Sam Ryan onto Maguire to quench that fire. Finally, Colm Scully released Sherlock to goal brilliantly to put the Barrs in front, and Brian Hayes walked the ball around Anthony Seymour with four minutes to go to put six between the teams and seal the game. The Barrs had 2-16 from play and had double the Haven’s turnovers. Sherlock and Hayes had 2-7 from play between them. A lot to ponder for Paul O'Donovan, the Nemo manager. 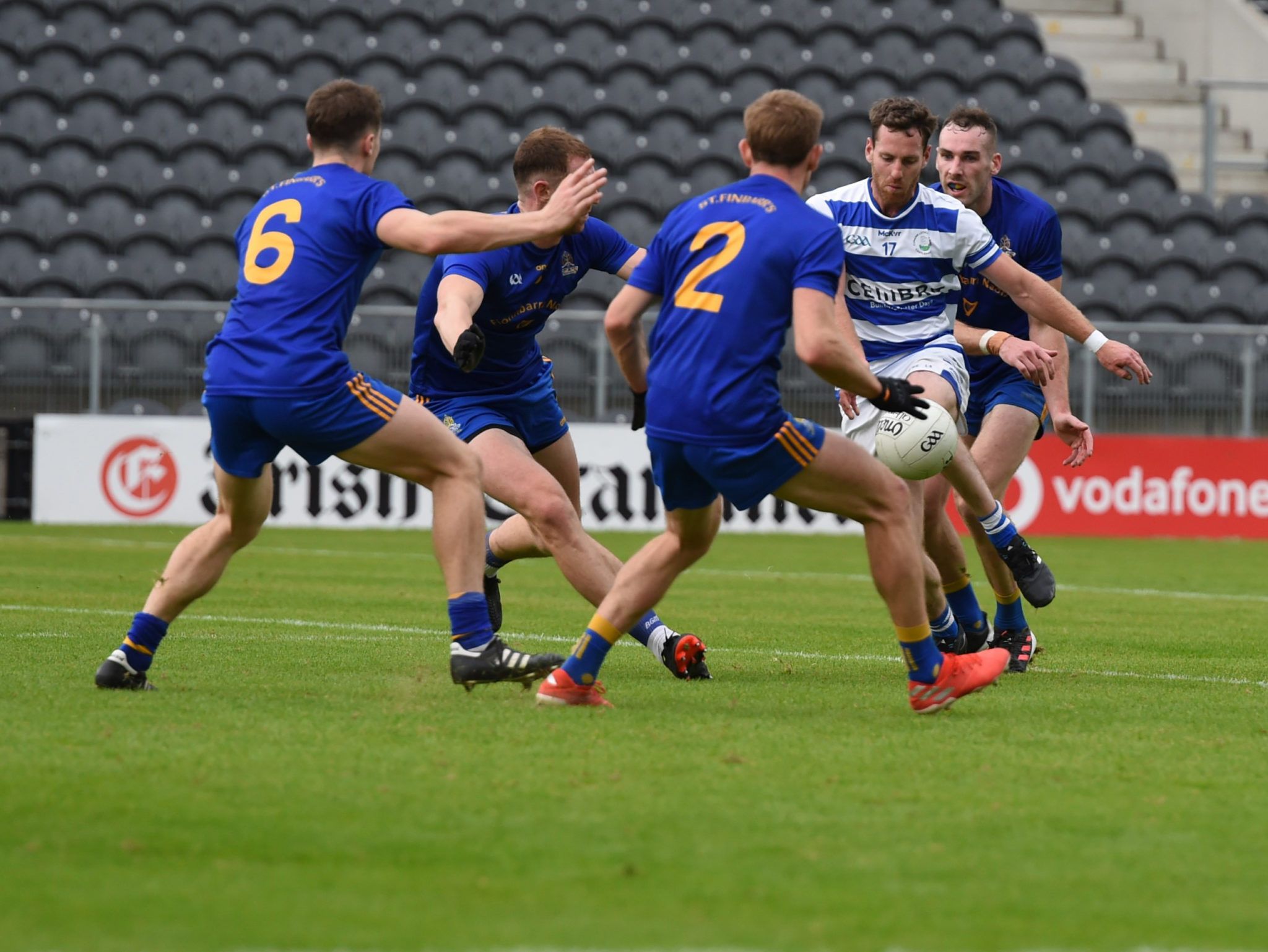 Castlehaven's Conor O'Driscoll is closed down by St Finbarr's defenders.

In the opener I gave Ballincollig a realistic chance of turning over Nemo. They were there or thereabouts for 40 minutes when Nemo went two up and then Mark Cronin was bundled over for a penalty which Luke Connolly converted to put match-winning daylight between the sides.

Compared with Clonakilty’s and Carbery Rangers’ approach to playing Nemo, Ballincollig were far more open. Luke Connolly, Conor Horgan, Barry O’Driscoll and Mark Cronin hadn’t seen green spaces in front of them in two games. Between them they plundered 1-11 of Nemo’s 1-16. All of Ballincollig’s nine points came from play, effectively taking Cian Dorgan’s free-taking ability out of the equation. It was a well-disciplined showing from the Nemo rearguard.

Now Ballincollig on occasion, usually after getting a score themselves, retreated in numbers to close the space but most of the time they were trying to hold two or three players up the field. One of those was their chief score-getter Darren Murphy. The worry I had for Podsie O’Mahony’s men was that if Murphy was held they would struggle on the scoreboard. Nemo held him to two points from play. Three points in the second half of a county semi-final and nothing in the last quarter just won’t cut it at this level.

At the other end Evan Cooke was given the job of marking Connolly, and it just didn’t seem natural to him. Sean Kiely was immense at midfield but time and again, particularly in the first half, Murphy was inside one-on-one in 50 yards of space and nobody had the courage to drill that ball in low and early to him. Only one down at half time it looked like this one would go to the wire but Connolly’s spot kick put pay to that. For Ballincollig’s young brigade this will have been a great learning experience for the years to come. Nemo found their appetite for hard work which had been missing in the last two games.

It is an intriguing final matchup between these city rivals and things will have to go very wrong for the Barr’s in order to lose this one.