Undivided attention: Cork's Aidan Walsh feels he has made the right decision by focussing all his efforts on Cork hurling. 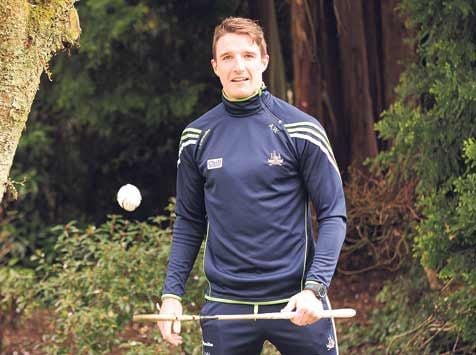 Undivided attention: Cork’s Aidan Walsh feels he has made the right decision by focussing all his efforts on Cork hurling.

AIDAN Walsh was delighted to get the call from Jimmy Barry-Murphy to join the Cork hurling squad last year, and, after filling a dual role in the top flight for 12 months, he says he has no has regrets about his decision to opt out of the football scene at the end of 2014.

While he had won every major honour in football since making his debut at the top level in 2010, he revealed that to play senior inter-county hurling would have been his main ambition as a youngster.

‘Coming out of minor, if I had been asked what game I would prefer to play with Cork at senior, I would have said hurling, but the footballers came calling first, and I was lucky to enjoy a lot of success with them,’ Walsh said.

‘It was probably the fact that I was with the U21s when we won the All-Ireland in 2009 that pushed me towards the footballers, but I always had it in the back of my mind to play hurling, so I was thrilled when I got a phone-call from Jimmy asking me if I’d be interested.

‘I didn’t hesitate to accept the offer, and once Jimmy and Brian Cuthbert were happy about it, I was prepared to give it a go as a dual player last year.

‘It didn’t work out as well as I’d hoped, and I knew that. For my own benefit, I had to make a decision to focus on one game this year.

‘I’m 100 per cent happy with the decision I’ve made. While I still think there is a place for a dual-player at the top level, it’s finished for me. I won’t be doing it again,’ said the Kanturk man.

With two years having elapsed since he played hurling at U21 level with Cork, it was never going to be easy for Walsh to make the step up to senior, and he admits he found it very difficult initially.

‘In my first few league games last year my performances were way below par, and I knew I had an awful lot to work on,’ he said.

‘If you are not playing inter-county hurling the whole time, you can lose your sharpness very quickly, but I felt I was beginning to get it back as the league went on last year.

‘Having got a few games under my belt, I was a bit more comfortable going into the championship, and playing at midfield definitely suited me.

‘I know my limitations, and I know I’m not going to be able to do what the likes of Patrick Horgan and Seamus Harnedy can do, which is running through defences and taking scores.

‘I’m able to run and break up play, and I just leave the ball off then to the boys who can do the rest of the job. That’s what I’m good at.

‘Now that I’m concentrating on the one game, I can keep my sharpness up totally, so I’m really enjoying my hurling at the moment,’ he revealed.

After making a major contribution to Cork’s success in Munster last year, Walsh accepts his display in the All-Ireland semi-final against Tipperary wasn’t up to scratch. He contends his involvement with the footballers in the lead-up to that game was a factor.

‘That probably set me back a good bit, but the most disappointing thing was we didn’t do ourselves justice as a team on the day,’ he said.

‘I think our performance against Tipp clouded people’s judgement when it came to assessing our year overall, but we knew we needed a good run in the league this season in order to rebuild confidence before the championship.

‘We’re absolutely delighted to be where we are now now. If we can beat Waterford in the league final, it will push us on a bit more.’

While Cork were convincing winners in last year’s Munster championship replay with Waterford, Walsh believes it was just one of those days when everything went right for the team.

‘We were fortunate to come away with the draw the first day, but we got lucky with a lot of breaks and a lot of scores in the replay, and sometimes it just happens that the ball always runs your way in a game,’ Walsh said.

‘Waterford are absolutely flying at the moment, and if we don’t deliver a big performance, they will be well capable of punishing us,’ warned Walsh, who will join Jimmy Barry-Murphy and Sean Óg Ó hAilpin as the only players to have won a league medal in both codes with Cork should the Rebels prevail in Thurles on Sunday.