IT IS mission accomplished for Clonakilty after they booked their spot in the knock-out stages of the Bons Secours county premier senior football championship with one game to spare.

A fighting performance, with a crucial goal from Sean White in the 25th minute, saw Clon not only gain revenge for last season’s heavy defeat by the same opposition but also qualify for the next stage of the competition.

This round-two clash – in Newcestown in perfect conditions recently – went down to the wire before courageous Clon emerged deserving winners thanks to Dara Ó Sé’s late winner.

‘That’s what our aim was, to get out of the group. We’re just after getting there and we’re delighted of course,’ said Clonakilty mentor Eoin Ryan.

‘It’s hard to pinpoint why we’ve come from being hammered last year to this. There is new management but we’re only facilitating the boys, they’re doing it all themselves. It’s all about hard work. We tell them it’s a process, that the scoreboard doesn’t matter. You do your job and the scoreboard will look after itself. This win should really bring us on.’ 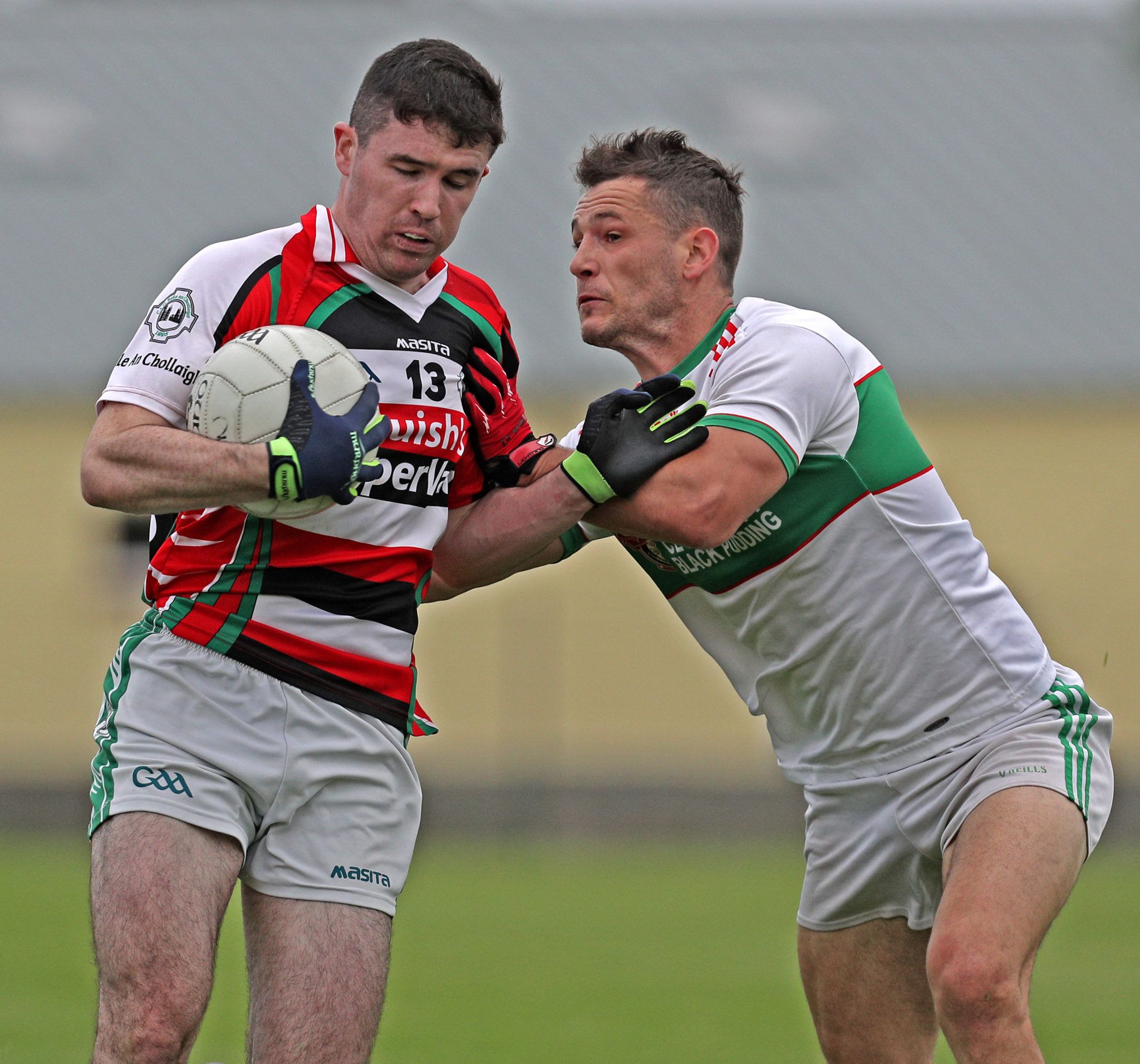 The Clon men certainly had to battle for this win with the sides level at 0-3 each at the first water break, with both defences on top. Darren Murphy, JP Murphy and Dara Dorgan (free) kicked points for Ballincollig, while Kerry import Dara Ó Sé had Clon’s three scores, including two from play.

The second quarter saw Mark Oldham and Ó Sé (free) swap points before Luke Fahy put Ballincollig in front. The crucial score of the game arrived in the 25th minute when Jack O’Mahony set up wing back Sean White for a Clon goal. When Sean McEvoy and O’Mahony added points, Clon were buzzing and full of running. At half time, it was Clon in front, 1-6 to 0-5, with their large support cheering them on.

Just as they had done in the first round against St Finbarr’s, Ballincollig lifted their game in the second half. Darren Murphy pointed, Luke Fahy had two fine long-range scores, Dara Dorgan pointed a free and sub Sean Kiely had a fifth before retiring injured again, as Ballincollig upped the pace but Clon responded with points from Ben Ridgeway and Ó Sé (free).

It was Clon still hanging on in front, 1-8 to 0-10, at the second water break, but Ballincollig were dominant, especially in defence. To their credit, the Clon defence was just as tigerish, with Thomas Clancy, Dan Peet and the returned Liam O’Donovan, who was playing his first football game since July 2020, rock-solid in the full-back line. Goalkeeper Mark White often created the extra man by venturing well outfield and also caught a couple of high balls that were going over the crossbar.

‘Liam got a fantastic point, for a fella who hasn’t played a match since July 12 months, it was some going there to play 60 minutes, high tempo. Liam is unreal,’ Eoin Ryan commented. 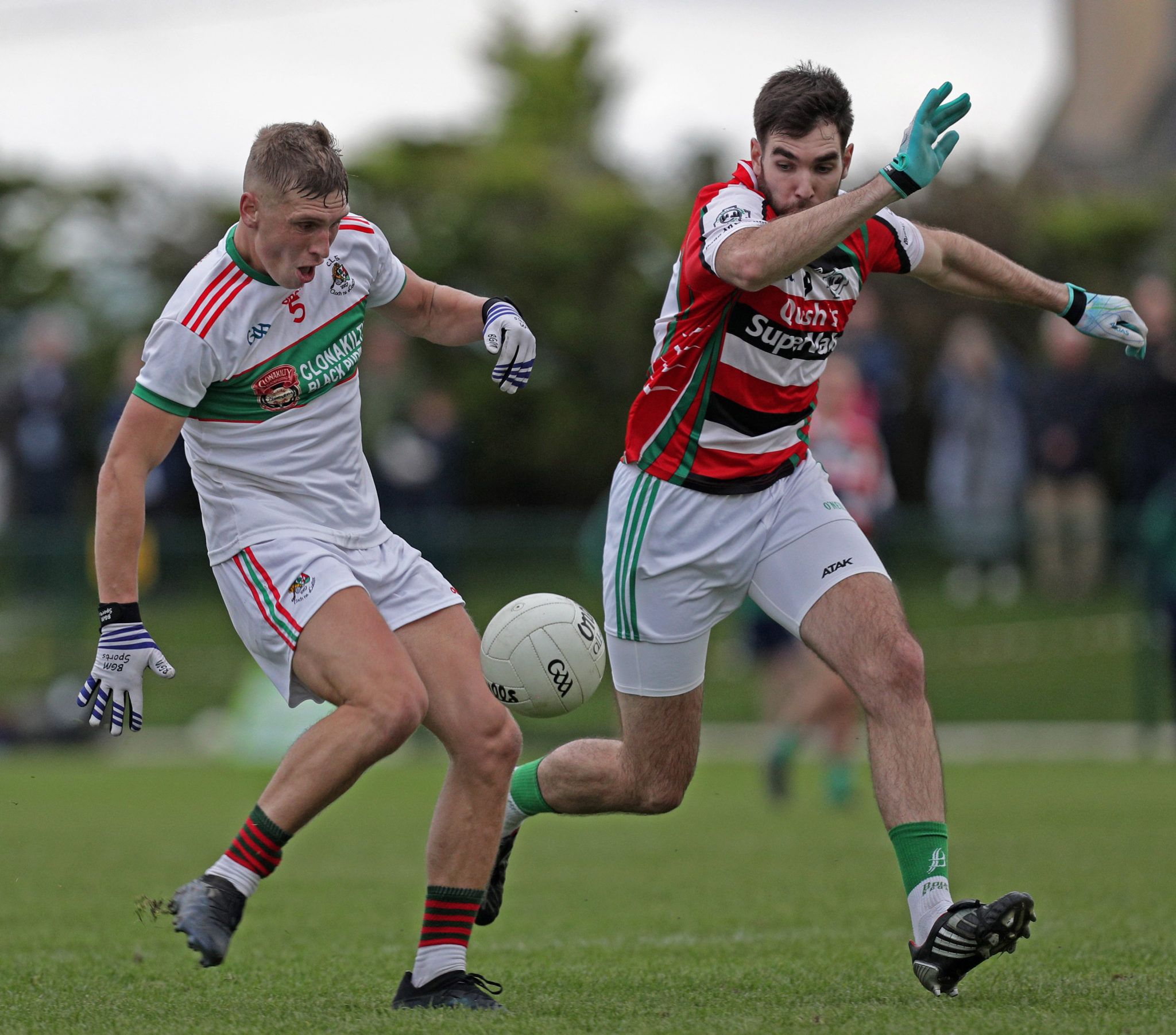 The second crucial moment in the game arrived in the 50th minute when Ballincollig wing back JP Murphy received a second yellow and Clon had an extra man for the closing ten minutes. However, it was Ballincollig who looked as if they had superior numbers as they swept forward looking for an equalising point. It arrived in the 54th minute when Cian Dorgan flighted over a lovely score but Clon refused to accept defeat after leading most of the game.

With Sean White, David Lowney and Eoin Deasy working their socks off in the half-back line and Ben Ridgeway and Joe Grimes getting a grip at midfield, Clon surged forward looking for a winning score. However, despite great work from Dara Ó Sé, Ross Mannix, Conor Daly and Seán McEvoy, hasty shooting and poor option-taking thwarted their efforts until Liam O’Donovan burst out of defence in the 55th minute to kick a wonderful lead point.

It was far from over yet as Ballincollig replied with a Darren Murphy point and it was all square entering injury time. Misses from play and frees failed to curb the tenacious Clon men and in the 62nd minute Ó Sé finally found the target from a free for the winning point. Now, Clon march on.