The Irish hurling team that played against America in the 1928 Tailteann Games. (Photo courtesey of the National Library of Ireland).

Recently, GAA President Larry Murphy performed the first ever draw for the new Tailteann Cup senior football competition live on Radio 1’s Morning Ireland. He remarked that he hopes the competition “takes off like a meteorite.”

Sam Maguire, the name associated with the cup presented to our tier one competition winners, was a native of Dunmanway, as we all know, who immigrated to London and got involved in the GAA over there as firstly a player and then an administrator.

On his passing his friends commissioned a cup in his memory which in turn was presented to the GAA.

Round 1 of the Tailteann Cup takes place this weekend. Sam Maguire is a name synonymous with the GAA, part of our culture and heritage. But who or what was Tailteann?

I asked this question recently in some very knowledgeable football company and nobody had the answer.

The first thing I thought of was Páirc Tailteann, the home of Meath GAA so I figured he must be a Meath man but when I delved a little deeper, the name is far more meaningful and rooted profoundly in Irish culture and GAA tradition.

100 years ago the biggest sporting event organised across the world that year was in Ireland. This event - the Tailteann Games – was bigger even than that year's Paris Olympic games.

That year the Tailteann games saw more than 5,000 competitors compete in a remarkable range of sporting events. 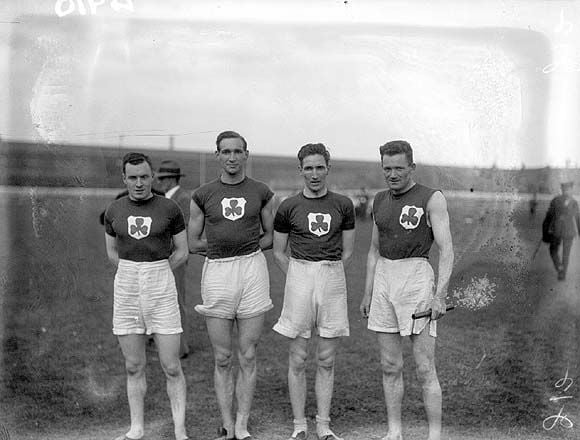 Four Irish athletes at the 1928 Tailteann Games. (Photo courtesey of the National Library of Ireland).

However modern folklore claims that the Tailteann games started around 1600 BC. The games were founded according to the Book of Invasions, by Lugh Lámhfhada, who was the equivalent of a master craftsman or Doctor of the Sciences as a mourning ceremony for the death of his foster mother Tailtiu.

The ancient Aonach as it was known back then had three functions, honouring the dead, proclaiming laws and funeral games and activities to entertain.

Games back then included, long jump, high jump, running, hurling and spear throwing among others.

And would you believe the games also featured a mass arranged marriage, where couples met for the first time and were given up to a year and a day to divorce on the hills of separation seemingly around Tara in county Meath.

‘Tailteann Marriages’ as they were known were legal up until the 13th Century. The last record of these games was just before the English invasion in 1169.

The revival in 1924 sent a clear message that Irish culture had survived centuries of invasion and oppression. Ireland wanted to show the world it was free by staging a major sporting festival.

Civil war had delayed the start of the games until 1924 but the then Taoiseach WT Cosgrave was clear in his motivation saying, ‘There is more, much more to the life of a nation than politics and economics.’

The games consisted of a full athletic programme, all the games of the GAA as well as the likes of swimming, golf, tennis and horseracing.

No soccer, no rugby, no hockey. These games weren’t considered Irish enough.

Staging these games brought the Irish Free State to international attention and were accompanied by a series of cultural events.

The GAA was provided with £10,000 to refurbish Croke Park for the opening and closing ceremonies with the expectation of 150,000 visitors to the Capital.

The competition ran for sixteen days. Competitors were supposed to be of Irish birth or be of Irish heritage. The organisers scattered a touch of class among the competitors with 23 medal winners from the Paris Olympics taking part. The games were held in the Phoenix Park.

The broad view was that the games were such a success that they should be held every four years like the Olympics.

They were held again in 1928 and 1932 with diminishing success. In 1932, the election of Fianna Fáil to government spelt the end of the games as they were closely identified with Cumann na nGaedheal and the post-Civil War bitterness.

Its full name being the Rás Tailteann.

Athletics Ireland continues to use the name Tailteann Games for its annual schools interprovincial championships.

So the name of this new cup carries huge depth and meaning within Irish society. It is a big step in the right direction by the GAA to create a second tier football competition like the hurling equivalents which are gaining traction year on year.

The visionaries within Croke Park have been proven right in their assessment of the divide between Division 1 and 2 teams and the rest.

No Division 3 or 4 team has qualified for the Sam Maguire with the requirement being that they had to make their provincial final.
In order to succeed both tournaments need to be given equal promotion and TV air time. Will we see the day when the Tailteann Cup winners will go on to lift Sam?

Players crave success and this competition could be just the launching pad to reinvigorate old powers and generate new powers in the game we all love dearly.