Kinsale’s Stephen Tobin (Yamaha) in action during the Moto 400 race at the Dunlop Masters in Mondello Park. (Photo: Barry Cregg)

Tobin was in electrifying form in the Moto 400 series where he campaigned his Yamaha FZR 400SP to victory in all three races.

Teenage debutant Quilter, in a late switch that saw him revert to his own Aprilia RS125, experienced all three steps of the podium in his trio of races in Moto 1.

Racing in the Superbike category, Bandon’s Derek Wilson, who had targeted a top-eight finish, set a PB (personal best) in his Suzuki GSXR 1000 in the third and final race where he set a lap time of one minute and 44.434 seconds (120.754mph) on his way to sixth place.

Tobin, winner of the Moto 400 series in 2019, didn’t disappoint in his outings. With a change in the race itinerary, he had two of his Moto 400 races on the Saturday. It mattered little as he emerged a comprehensive winner, crossing the finish line with a victory margin in excess of 13 seconds on both occasions. In the final race (seven laps) and with races in the Supersport Cup later in the day, he took a 3.047seconds victory.

In the Supersport Cup, where he was onboard a 600cc Kawasaki ZX6R, Tobin was fifth, sixth and fifth in his respective three races. Changes to the rear suspension saw him take two seconds off his Saturday’s lap times. Afterwards, he told The Southern Star, ‘Yes, it was a great weekend, it was good to win all three in the Moto 400.’

However, the margin of victory has given him concern and he may change his plans.

‘I am between two minds if I will chase it (Moto 400) down or not. It’s always good to have a battle, there is no point in wasting entry fees and tyres. I haven’t decided yet. I might just concentrate on the Supersport and try to improve my racing in that category. However, if Louth’s Damien Horgan came back, it (Moto 400) would certainly be competitive,’ Tobin explained. 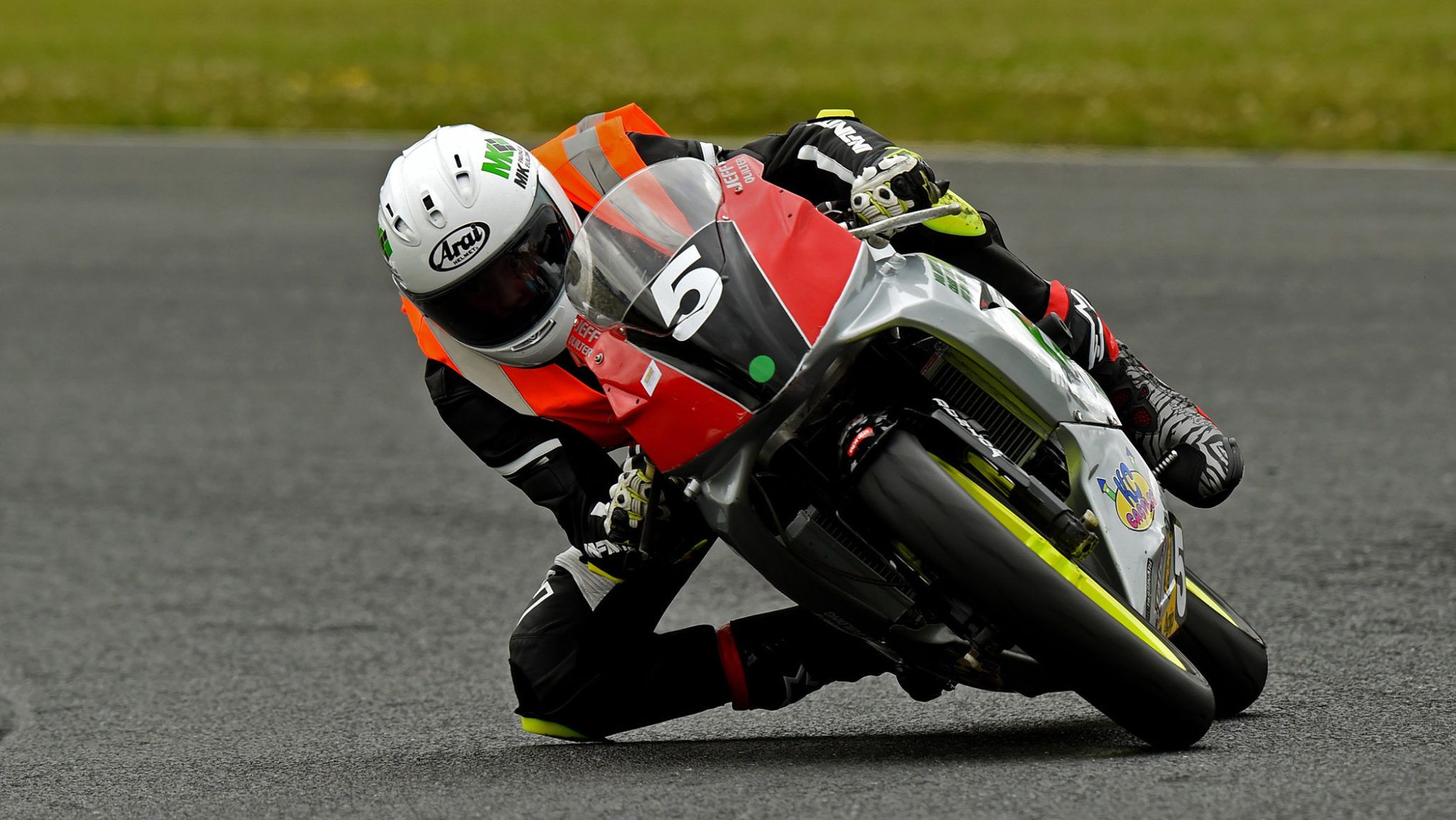 Meanwhile, Jeff Quilter’s pre-event preparation brought a change of plans when he had to revert to his own Aprilia RS125. A compression screw was cross-threaded and it was locked solid on the #Team 109 KTM, so he reverted to the Aprilia. The late change certainly had no ill effects as 16-year-old Jeff took the chequered flag in the opening race that was re-started after a competitor fell from his motorcycle. In the Saturday’s second race he finished third and on the Sunday netted a second place finish. In championship terms he collected a total of 61 points, just four behind early series leader Athy’s Josh O’Brien, also on an Aprilia RS125.

‘I’m very pleased. We made a late change to the gearing for the third race and it made a huge difference. We might change our plans for the season. Originally, we had planned to use the #Team 109 KTM bike for the Mondello Masters and the Aprilia for the Northern Championship. Now we will probably use the KTM up north and the Aprilia in Mondello,’ Quilter said. His next outing is in the Northern Ireland series next week.

In the Superbikes, Bandon’s Derek Wilson was extremely pleased with his performances that yielded eighth, seventh and sixth respectively. Prior to the weekend he declared, ‘I would be happy if I finish in the top eight.’ His PB in the third race was a great bonus.

Elsewhere, Fountainstown’s David Gash was the passenger in the Sidecar race where he partnered Wexford’s Darren O’Dwyer. They netted two second-place finishes and ended with victory in the third and final race. The all-Kinsale crew of Aidan McCarthy/Diarmuid Cunningham were also competing in the category and they came home with an eighth and two seventh place finishes. Rounds 4-6 of the Dunlop Masters at Mondello Park take place on July 24th/25th on the national track.