Libby Coppinger has developed into a key player for Cork.

INSPIRING. Focused. Unassuming. Determined. Those are just some of the words to describe St Colum’s camogie star Libby Coppinger.

The Cork full-back, who has been in phenomenal form this season with the Rebels, seems to be getting better and better each year.

‘I think Libby now is probably coming into the section of her career that she can drive on and put herself as one of greats of the game in her generation,’ former Cork camogie manager Paudie Murray told The Southern Star.

‘She’s a nailed-on All-Star in my eyes. I’ve watched a lot of her performances (this year) and she’s been top class.’

The 26-year-old Kealkill woman has been playing with the Cork senior camogie team since 2016. To date, she has won two All-Ireland senior titles in 2017 and 2018. She will hope to add another All-Ireland medal to her collection this Sunday. (Read Cork v Kilkenny match preview here)

Coppinger’s class is there for all to see on the pitch for the Rebels, but what most people don’t see is what she is like off the pitch.

‘Libby would be the type of player that if there’s messing going on, she wouldn’t be part of it because she’s a very serious girl,’ Murray added.

‘This girl drives an hour and a half to training, gets on the pitch, does her bit and gets out of there as quickly as possible. That is Libby Coppinger.’

Versatility is a key aspect to the modern player. The St Colum’s star is one of those who excels in that department.

‘Libby has played in many positions within this Cork team. She played in an All-Ireland final at midfield. I think she had a blinder wing-forward for us.

‘One year, she was playing midfield up to the final, was then put at corner-back and had a great game the same day.’

There is something somewhat unique about Coppinger, according to Murray.

‘There aren't too many players that play midfield in an All-Ireland semi-final and three weeks later, find themselves at corner-back, a position she has never played in before. It would have bothered a lot of players, but it certainly didn’t bother her,’ Murray said.

Both Coppinger and Meabh Cahalane are dual stars. They play football and camogie for Cork at the highest level. With the footballers going out in the quarter-final, their progression in the camogie championship has got more focus. Murray believes it helped the players.

‘I don’t think it is possible anymore (playing dual). I think the one bit of luck Libby and Meabh have was that the footballers were knocked out two weeks previous,’ he explained.

‘It allowed them to recharge the batteries. You can see that in their performances against Waterford.’ 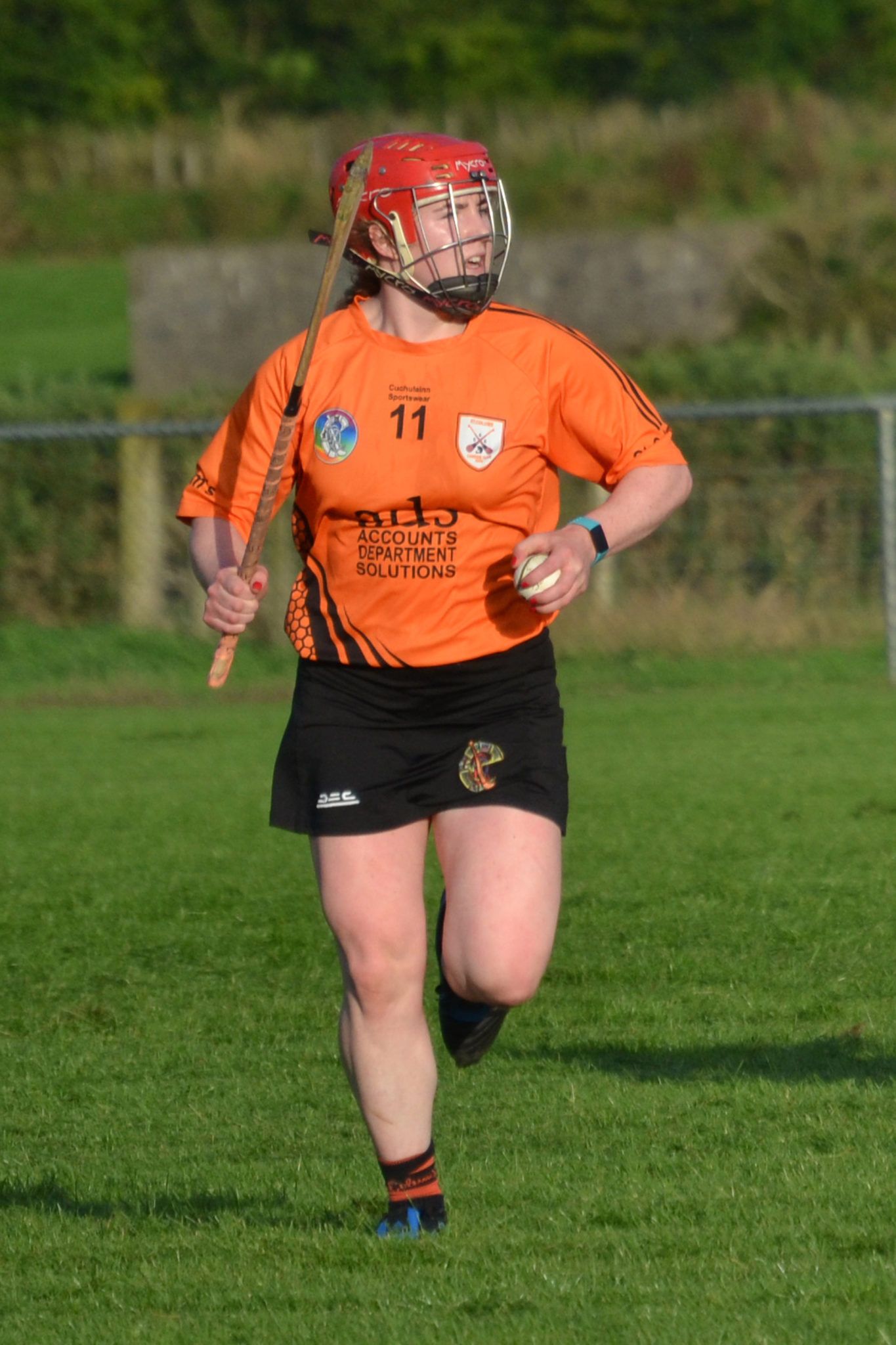 Libby Coppinger in action for her club, St Colum's.

Coppinger’s leadership qualities are also recognised, especially in her own club.

‘She wouldn’t be roaring or giving out to the team, she’d speak when she’s asked to speak. Paudie (Murray) could see the potential, she’s a leader.’

Role-model is another term to describe the Colum’s player.

The way she conducts herself in the club is an inspiration to anybody.

‘The kids look up to her totally, because of Alan O’Connor previously and now Libby, the two of them are just fantastic ambassadors,’ Murnane added.

‘If you bring Libby to a training session, you can hear a pin drop. She’s a professional.’

Coppinger is not afraid to make herself known around her club either, despite training so much at inter-county level.

‘She’s made an unbelievable impact. She’s at every Cúl Camp or training sessions every time you go down (to Colum’s),’ explained Murnane. ‘If she’s not training with Cork, she’s down in our pitch. A pure role-model.’

What most people might not know is how Coppinger played underage while there were no camogie or LGFA clubs.

‘We didn’t have a camogie club and our ladies football club kind of disbanded. She was playing with the boys up to U14 and she was one of the best players of that U14 team,’ Murnane said.

‘You could tell when she came onto the girls’ team, she was impossible to mark. I do think she physically improved after playing with the boys,’ the Colum’s chairperson said. 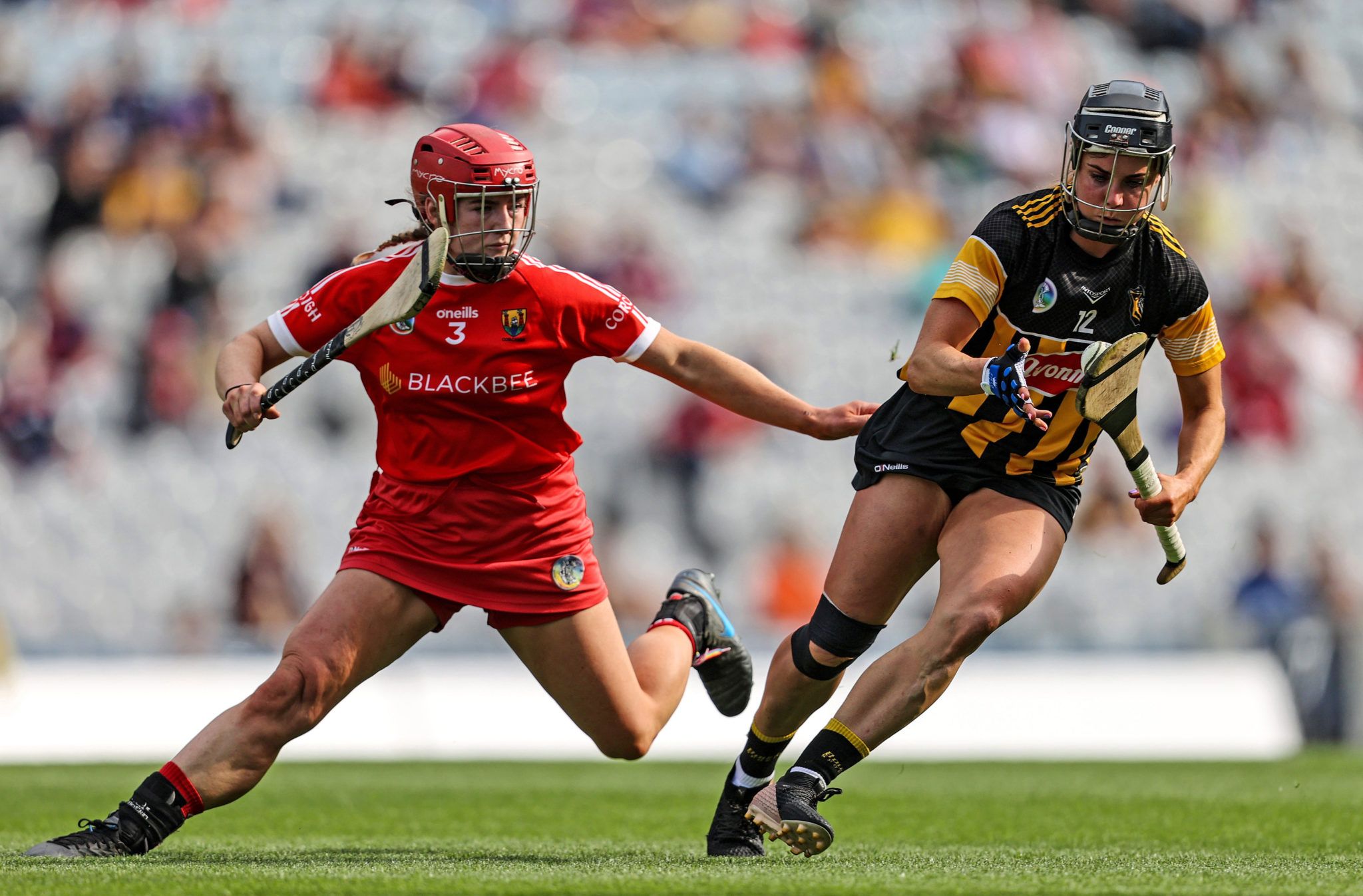 Their Cork hero is also an inspiration to those in the Keakill area, a player to look up to.

‘When Libby is out on the pitch, she’s so focused, she’s one of the best players to go out (and play) with,’ concluded Murnane. In most people’s eyes, the West Cork woman was the Player of the Match in the recent All-Ireland semi-final win against Waterford. It was one of her best displays at full back. Cork manager Matthew Twomey agrees.

‘Against Waterford I thought Libby was the player of the match. She was absolutely outstanding,’ he said.

‘She’s quiet and unassuming, but does her talking on the field.’ Coppinger has been an integral part of the Cork camogie team this year, not just as a player but also as an inspiration for others. Twomey even compared her to a legend of the game.

‘On the field she reminds me in so many ways of Briege Corkery. She is a livewire,’ he explained. ‘You can see her with the younger girls, she would have a quiet word with them.’

Her influence on not just Colum’s but the Cork camogie team hasn’t gone unnoticed.

Whether she will win an All-Star remains to be seen.

Nevertheless, she has put West Cork on the map for camogie.