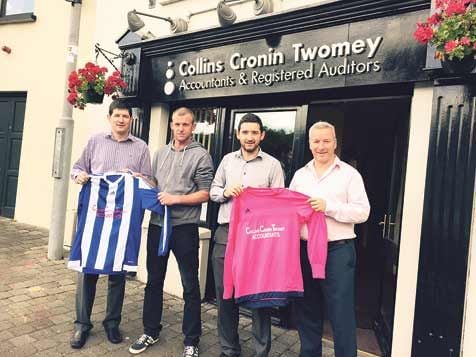 SPARTAK Mossgrove, the newest club in the West Cork League, are ready to take Division 2 by storm.

Rising from the ashes of former club Crossmahon, the newly named Spartak Mossgrove will draw on a combination of experienced players and a crop of up-and-coming youthful talent from the Newcestown area.

Daniel Twomey is one of the individuals responsible for creating the most recent addition to the West Cork region’s soccer fraternity and is looking forward to the upcoming season.

‘The younger members of the squad wanted to come up with a new name and freshen things up a bit heading into the season so Spartak Mossgrove was agreed upon,’ said Twomey.

‘Most people in this (new) club were previously involved with former West Cork League side Crossmahon and are living in and around the Newcestown area. We have spent the last few years playing for other clubs since Crossmahon finished up. I spent the last few seasons togging out for Riverside Athletic and there would have been six or seven others representing Castletown Celtic.’

So it was a simple case that a group of friends who previously lined up alongside one another in the colours of Crossmahon met up over the past few months and decided to get the band back together, signing up for the 2015-16 West Cork League season.

‘We do not have a manager in place right now but are on the lookout for somebody to take charge,’ admitted Twomey.

‘The core of the Spartak squad will come from the Newcestown area and include guys like Darren Heffernan, Brian O’Donovan and Bernard O’Callaghan. It is pretty much the old Crossmahon team plus a lot of new young players who are anxious to get involved.’

As any West Cork League club will admit, you need a large squad of players to ensure you have cover in every position throughout the year. Thankfully, registering names has not been an issue for Spartak.

‘The initial signs are good as we filled in the registration form for the new season with 30 names and could have added a lot more,’ stated Twomey.

‘As a group and former club-mates, we have really missed being involved in the West Cork League, especially during the winter and new year.

‘It might be a bit hard to get some of the lads out on the cold Sunday mornings to begin with but we will use the old Crossmahon pitch in Bandon and hopefully hit the ground running and just go from there.

‘A new kit has already been sourced and we are delighted to have new sponsors as well in Collins Cronin Twomey Accountants and Registered Auditors, Innishannon.’