PAUL O’Donovan’s understated reaction to winning his FIFTH world title in a row doesn’t dilute the magnificence of his latest achievement.

The Skibbereen phenom’s interview with RTÉ caused plenty of furrowed brows as he downplayed his latest world title.

‘It's fine, yeah,’ the Lisheen legend replied when asked about winning five world titles on the bounce.

Queue an awkward few seconds when he turned down the chance to expand on his own success – but he did his talking on the water at the World Rowing Championships in the Czech Republic, alongside Fintan McCarthy.

Together, these two powerhouses, forged in red-hot Skibbereen Rowing Club, are sensational. They are unbeatable. Olympic champions. Now two-time World champions. Back-to-back European champions. They are a different class, and they proved, again, why they are the best lightweight men's double sculls in the world.

Paul and Fintan, as expected, cruised into the A final, though the Swiss pair did put up a fight in the semi-final before meeting the same fate as every other crew that has tried to get the better of the Skibb duo in their yellow Empacher boat.

The Aughadown men, from the same parish outside Skibbereen, saved the best for the medal race on Saturday afternoon.

In sixth place after the first 500 metres, by the time the race reached its 1000m halfway point they had moved through the field to hit the front, sending out a clear message to the other five crews. They found their rhythm and they row to a different beat to their rivals who must be scratching their heads to find a way to beat the West Cork wonders.

There was an inevitability about the result once the Skibbereen rowers decided to make their move. Paul and Fintan stretched their lead in the third quarter, and there was clear water between them and the rest when they crossed the line to win gold in 6:16.46, almost three seconds ahead of Italy in second (6:19.11) with Ukraine in third (6:19.53).

This Skibbereen dream team is making the extraordinary look ordinary.

There’s an expectation the deadly duo will win gold. And they deliver. Every time. It’s now 19 straight wins at international level. That has seen them snaffle up Olympic, World (2) and European (2) titles, as well as 2021 World Cup II gold. Their dominance is remarkable, and so too is how they have hit the heights again this year despite sharing very little time together in the boat.

Before they defended their European title in mid-August they had been in the Irish double together less than ten times since the Tokyo Games in July 2021. Yet they won by clear water. Preparation for the Worlds was not ideal either, as Fintan was on a training camp in Spain while Paul continued his medical studies at UCC. The end result was the same as it always is with these two: gold and glory. That they can still beat every other crew despite not training together too often this year is ominous news for the chasing pack. 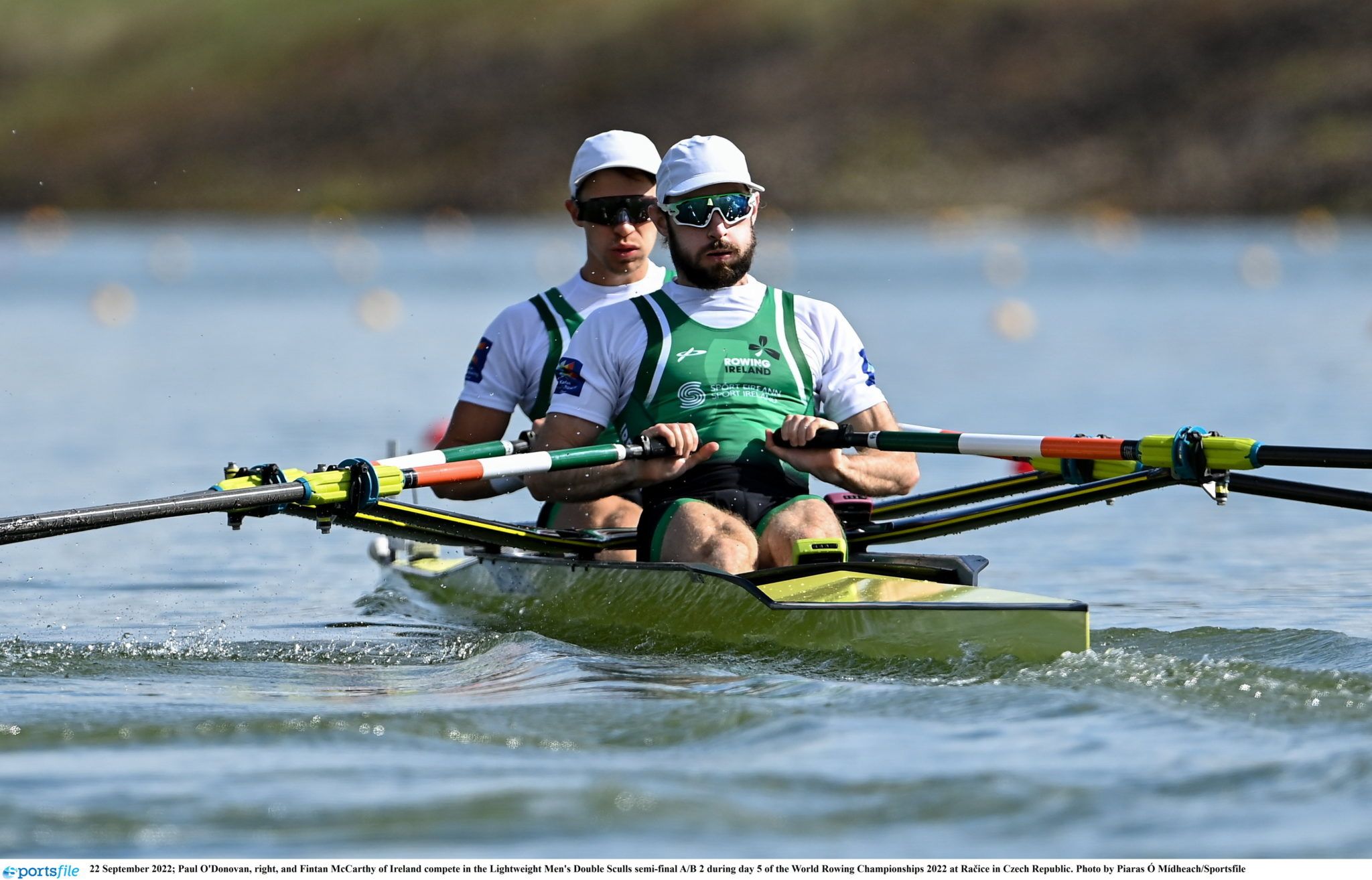 Paul O'Donovan, right, and Fintan McCarthy in action at the World Rowing Championships.

‘We decided to come here without our usual preparation so I’m really proud with how we approached it,’ Fintan told RTÉ Sport.

‘Regardless of the medal, the trust we had in each other to prepare the way we did is going to stand to us for the next few years and it stood to us this year as well. I’m just really happy and proud.

‘I think the trust in our coach and our programme as well, without that we wouldn’t have been as confident to come here without our usual time together.

‘It was just a really good year for us really.’

As the curtain closes on the 2022 season, attention will switch soon to 2023 when Olympic qualification will be up for grabs ahead of the Games in Paris in 2024. Right now they are untouchable. And there’s more to come, as Paul and Fintan quipped on a World Rowing interview after their latest gold medal win.

Their focus will turn to ‘hamstrings and quads’, Paul smiled, and they will attempt to ‘get more out of the biceps’.

‘If they (opposition) are not afraid now they will be pretty afraid when they see our biceps that are to come. They are going to be impressive, let me tell you. You are going to need a wide-angle lens on the camera the next time you interview us, I assure you,’ Paul joked, having done the talking that really mattered on the 2000m course in Racice.