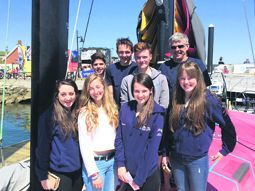 Trip of a lifetime: Schull Community College students pictured on their recent tour of sailing schools in the New England area of the United States.

SIX young Schull sailors are busy preparing for the 2015 ISAF Team Racing Worlds that will be held at Rutland Waters in the UK later this month.

Ireland are sending three teams to the championships – two open division teams and one youth U19 team.

Five of the team are recently back from the college’s biannual tour of sailing schools in the New England area of the United States, visiting five different schools from Boston, Cape Cod, Providence and Newport, where the team stay with different families each night after competing with the school that day.

Sailing has grown in strength over the years at Schull Community College, with the school now regarded as the top school in the country for sailing, producing some of the top sailors in a number of disciplines internationally.

The ISAF Team Racing Worlds were last held in Schull in 2011 with teams as far away as Japan, Australia and USA taking part.

The other two teams representing Ireland in the UK between July 20th and 24th consist entirely of Cork sailors, and again there is a huge West Cork interest.