‘GO and de-rig your boat’ – they were the first words from coach Dominic Casey to Lydia Heaphy after her breakthrough success at World Rowing Cup II recently.

The Skibbereen rower won her first senior international medal after finishing second in the lightweight women’s single sculls A final in Lucerne.

At last, Heaphy has something physical to hold, and to show, from all her hard work, but coach Casey kept her grounded initially.

‘He did say “you’re a great oarswoman and fair play to you” but that was only after I de-rigged my boat!’ Heaphy (23) laughs.

‘To be fair, he was delighted because he knew how important that race was for me.

‘He knew I had a performance like that in me for a long time and I think he was also frustrated at my race at the Europeans in April.’

At the Europeans in Varese, the Leap woman won her heat in the lightweight women’s single to qualify for her first A final at a senior international regatta. That was a high, but then came the low: Heaphy finished sixth in the final, fading as she ran out of juice after a strong start.

‘I know I finished sixth at the Europeans and that was better than seventh last year, but I was very disappointed with how I raced in the final,’ Heaphy explains.

‘I had the third fastest time going into the final but I ended up coming sixth, and girls who I had beaten already beat me in the final.

‘I think it was because of the excitement, it was all so new getting to an A final and it was probably all too overwhelming. I think I went off too hard in the race, I didn’t race smart and I didn’t race well, and I ended up not having enough to finish off the race.’

But her disappointment at the Europeans fuelled her success at World Rowing Cup II. The Irish rowing team stayed on in Varese for a training camp between the two events and after a sit-down with Dominic Casey – and they both knew she could row better – they identified what she needed to do to fulfil her potential. There were two parts to focus on: improving physically and mentally.

On the water at the training camp Heaphy worked on boosting her middle section of the race. Her start and finish were strong at the Europeans but she lost ground in the middle, so training was centred around improving that and getting the most out of every stroke.

‘I did a lot of low rate pieces in training where I was able to stay in control and work on better technique, so when I brought it up to a higher rate it felt a lot easier,’ she explained.

Off the water, she needed to believe in herself more, stay focused on herself and block out all distractions.

‘Working on the mental side is harder than working on the physical side because you don’t see the results straightaway. It’s something you have to work on all the time but I really noticed the difference when I was racing,’ she says.

All that work and all those strokes in camp paid off at World Rowing Cup II in Lucerne. Heaphy won her heat on the Friday and then won her A/B semi-final on the Saturday morning to power her into that afternoon’s A final and medal race.

Unlike the Europeans, she wasn’t distracted by her opposition. The Skibb rower felt in control. She felt confident in herself, too. She was armed with the tools, physical and mental, she needed. It was time to go to work. In third place at the halfway mark, she closed in on Italian sculler Federica Cesarini in second place, with China’s Huiru Li out in front. In the last quarter Heaphy was the fastest of all six finalists and she edged in front of Cesarini to win a silver medal by two tenths of a second and earn her place on the podium. 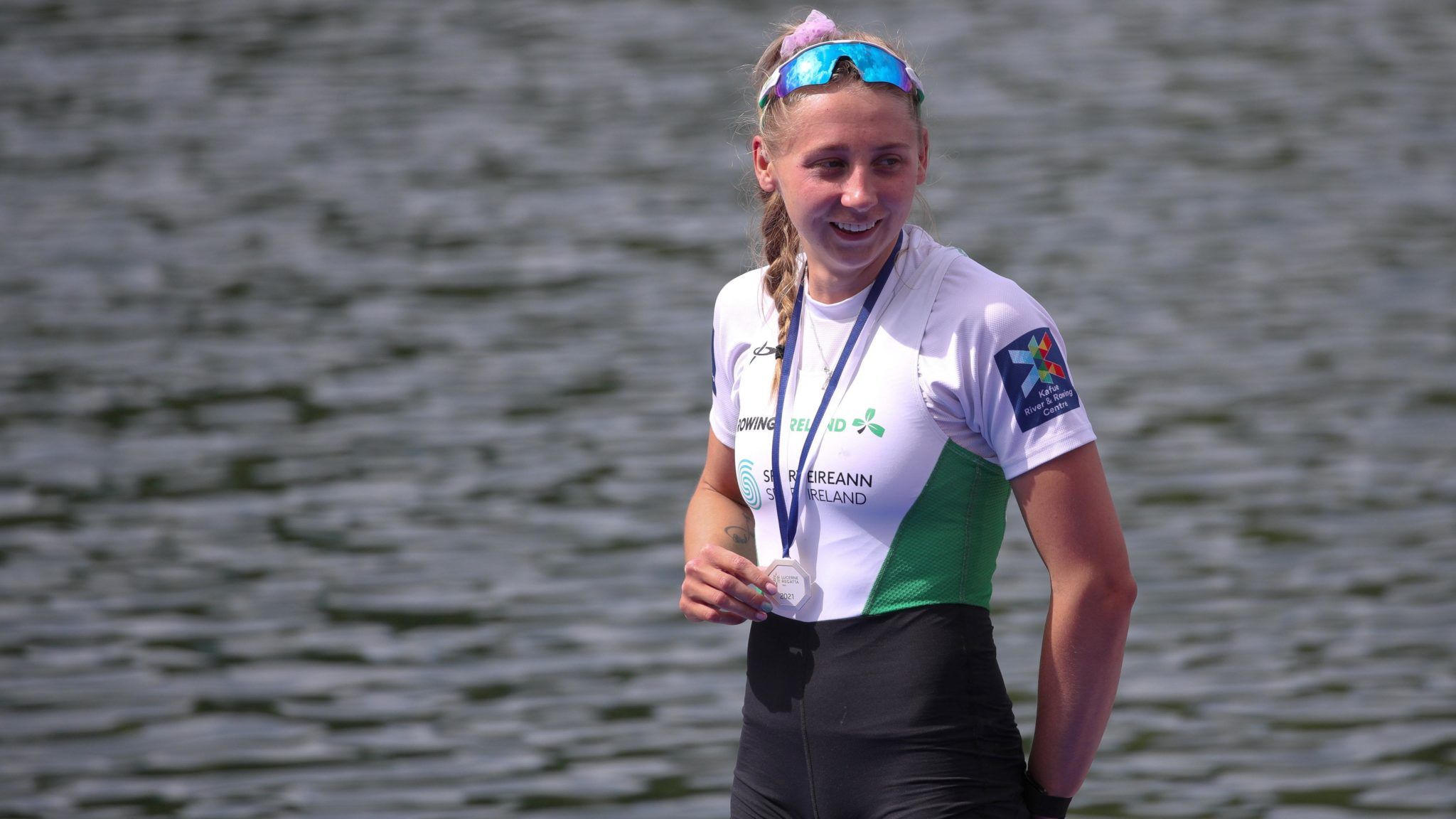 ‘After I crossed the line and saw that I had won a medal – I thought it was bronze first, to be honest – I just felt relief. It was pure relief. I have known for a while that I am fast and that I have the capability to be fast, but I haven’t been able to execute it on the water as much as I wanted to,’ Heaphy says.

‘It has reassured me that I wasn’t fooling myself, that I’m not just good at training but I’m good at racing, and that I am just as good as the rest of them.

‘Some of the girls I beat are medallists from European and World championships. I am only 23 so to be beating them has proved to me that I am on the right track.

‘That was only my second A final and I got a medal from it.’

This was the result that Heaphy wanted and needed. She did win a gold medal in the lightweight double at the U23 Europeans last year, but her latest success arrived at senior level. She has showed she can hold her own with the best single scullers in the world.

The week before World Rowing Cup II, Heaphy was also in Lucerne for the final Olympic qualification regatta, as a spare for the Irish lightweight women’s double of Aoife Casey and Margaret Cremen. There, the young Irish double snatched the last Olympic place on offer to qualify for the Games. An incredible moment for Casey and Cremen, and Heaphy is a key part of the Irish lightweight training group. That was another indicator that she wasn’t too far away from the senior medal she wanted.

‘When the girls qualified it reassured me because I am just as fast as they are. If they can qualify the boat for the Olympics, there is no reason that I can’t get on the podium. That gave me confidence,’ Heaphy says.

‘I was at the regatta when they qualified because I am technically the spare for them as well. It was hard watching the race and I was sitting there as the back-up, but it gave me such a buzz and confidence boost to see them qualify.’

One week later, it was Heaphy in the headlines for her silver medal exploits. It was her time to shine – and she grabbed it.

These are great times for Irish rowing with six boats heading to the Olympics in Tokyo. The likelihood is that Heaphy will go as the spare for the lightweight women’s double. She will be ready to row if she’s called on, but her next big event could be the 2021 World Rowing Championships in Shanghai in mid October. It’s one step at a time until then. There’s a three-week training camp in Banyoles on the horizon. Then, all going to plan, it’s on to Tokyo for the Games. Further down the line are the World championships.

‘This medal has given me a lot of confidence that if I do get to the World champs that I won’t be out the back door, and that I will be in the mix,’ she says.

Heaphy showed at World Rowing Cup II that she’s good enough to hold her own in the lightweight women’s single. She has the medal to prove it. One silver medal at a World Cup regatta, one giant Leap for this West Cork rower.