Celtic Ross West Cork Sports Star of the Month for May, Gavin Sheehan, centre, pictured with, from left, Sean and Geraldine Sheehan, and Maureen and Denis Crowley at the presentation last week. 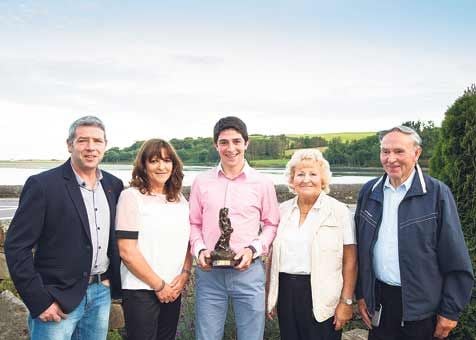 Celtic Ross West Cork Sports Star of the Month for May, Gavin Sheehan, centre, pictured with, from left, Sean and Geraldine Sheehan, and Maureen and Denis Crowley at the presentation last week.

Take last Thursday, for example, a rare exception to the rule when Sheehan slept in until almost 1pm – a luxury that isn’t afforded when he’s working across channel in an industry that’s even faster paced than the horses he rides.

‘Coming home is fantastic. It’s great to be able to relax and be stress free,’ the talented local jockey (22) said.

‘I didn’t get up until ten to one last Thursday – that’s something I can’t do over in England. I’m always doing something, either riding in the morning or working on something to improve. It’s non-stop.’

The summer is a quieter period for Sheehan who travelled back home to West Cork to accept his Celtic Ross West Cork Sports Star of the Month award for May following his fantastic World Hurdle triumph on Cole Harden at the Cheltenham Festival.

To land one of the Grade 1 races at Cheltenham is the stuff of legend, and a dream come true for Sheehan, who rides for trainer Warren Greatrex. It’s also a victory that will help open doors.

‘Trainers and owners won’t be afraid to use me on the big day now because they know that I can do it,’ he said.

So, what can you do to build on that World Hurdle win?

‘Ride another one,’ was the brilliant response.

Sheehan – son of Sean and Geraldine – is also one of the many jockeys who are looking to take advantage of the retiremenf of the greatest jump jockey of them all, and 20-time champion jockey, AP McCoy, who stepped back from the sport in April.

As one door closes for one, another opens for another, as the Dunmanway man explains.

‘There will be big opportunities for jockeys now that AP has retired,’ Sheehan said.

‘It won’t just be a massive opportunity for one jockey it will be a huge chance for everybody. When you look down at the winner’s list compared to last year, nearly everyone is after riding at least one winner this year.

‘There’s a slot now that needs filling because AP is gone so there will be chances there for jockeys to get rides that they might not have got before.

‘Richard is tied down to Philip Hobbs and he won’t be able to ride a good shot of them. AP wasn’t tied down to anyone as such so all of a sudden there will be good horses available that weren’t before and that will make it more interesting.’

Roll on the winter so, says Sheehan, and what he calls ‘the start of the proper national hunt season.’

This is a quiet period and Sheehan is kept tipping over, with 12 wins to his name this summer.

‘You know the summer is quiet so you basically use it to gear up for the winter. You try to ride a couple of winners to keep it ticking over and get everything sorted with an eye on the winter,’ he explained.

‘The proper national hunt season starts in the winter. It’s softer ground and over jumps. The good ground is more or less for the flat horses.

‘When you have horses that don’t win during the winter you tend to run them during the summer because there are less good horses in action and you have more of a chance of winning. The soft ground is safer and better for horses, there’s less risk of getting injured, and that’s why more good horses run in the winter.’

As well as working on getting his golf handicap down – it’s a work in progress, he laughs – Sheehan was thrilled to win his second Celtic Ross West Cork Sports Star of the Month award in two years. He was honoured last year for winning the UK’s conditional jockeys’ championship.

‘If I wasn’t riding winners I wouldn’t be heard of, so it’s always good to be riding winners and it’s always nice to win awards, especially a local award that means so much to West Cork sport,’ said Sheehan, who left for the UK last Saturday and who will return home for a visit in August.

The West Cork Sports Star of the Month awards are the premier sporting awards in West Cork, and are a joint scheme run by the Celtic Ross Hotel, The Southern Star and C103.